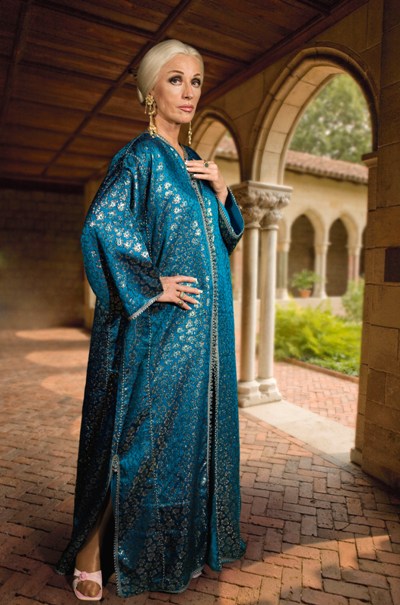 Cindy Sherman (b. 1954) has a unique place in postmodern photography. I don’t use “unique” lightly, but the word fits, because Sherman has invented an art form completely her own. Since 1977, she has taken pictures of herself while she masquerades in various poses using makeup, hairstyles, wigs, costumes, prosthetics and stage scenery to create socially critical images.

This extraordinary traveling presentation of the artist’s oeuvre begins with her earliest photographs, taken in the mid-1970s. Curated by the New York Museum of Modern Art, it is the first Sherman retrospective in 15 years, with more than 150 photos from public and private collections. Although I have seen examples of Sherman’s art over the years, viewing this complete exhibition gave me a much greater appreciation of her talent and artistry.

The show is not in chronological order, but arranges photographs thematically, revealing to the viewer artistic and technical aspects common among the series. The major series are described below.

This series introduces us to Sherman’s earliest works, with a glimpse of the birth of her creative process. Growing up on Long Island as the youngest of five children, Sherman loved to experiment with dress-up games. One can see the inkling of her talent in Untitled #479 (all her works are untitled) composed of 23 hand-colored gelatin silver prints. The first print is of the “real” Cindy Sherman, and what follows is a progression of prints showing her complete transformation, thanks to make-up and hairstyling.

Sherman has encapsulated the drama of B-movies in the series of her Untitled Film Stills. The only series of photographs that Sherman shot outside her studio, this complete set of evocative 20 x 25 centimeter, black and-white photographs captures the drama of B-movies by creating fictional starlets in 1950s and early ’60s costumes from films that were never made. The stars look familiar, but they never existed. One sees Cindy Sherman resembling Elizabeth Taylor, Kim Novak, Grace Kelly, Marilyn Monroe and art house film stars of French and Italian films. I particularly liked Untitled Film Still #54 for the way in which the Marilyn Monroe type is gathering her coat collar as though to hide herself.

In the late 1980s and mid-1990s, Sherman’s art took a dark and macabre turn to photographing detritus, decomposition, death and obscene sexual imagery. These disturbing photographs have actually sickened a number of viewers, especially the photographs using prosthetic body parts on dolls. This the only series in which Sherman is not the subject of her photographs. Sherman commented on her dark turn by saying that she wanted to see if she could tell stories or make images without depending on herself as the subject.

With these portraits, Sherman has created complex photographs of subjects in elaborate period costumes based on Baroque, Renaissance, Neoclassical and Rococo schools of art. Although most are imagined, at a distance, they appear to be recreations of actual paintings. Closer inspection reveals amusing prostheses such as bulging noses, huge breasts and warts on the subjects. This is the only series in which Sherman poses as a man.

Untitled #224 is actually a copy of Caravaggio’s late 16th-century painting, “Sick Bacchus.” The subject of Caravaggio’s painting is believed to be Caravaggio, so we see layers on layers of portraits in the photograph.

This variety of female “head shots,” in which they are sitting and facing the camera, was first shown in 2000 in Beverly Hills during the Oscar season. These photographs resemble has-beens or wanna-be actresses posing for headshots to get an acting job. We see how makeup, hair, poses and facial expression are used to reveal the subjects’ inner personae.

The Society Portrait series is the largest, most complex and most satirical of the exhibit. These imagined women have the familiar look of aging actresses and society matriarchs. They wear elaborate gowns of luscious materials. But the portraits also emphasize their struggle to remain youthful, and there are signs that they are losing the struggle. We see too much make-up and too many cosmetic surgeries. In Untitled #466, the tall elegant woman in a sumptuous silken caftan has feet of clay — she is wearing plastic shoes. In this portrait as well as others in this series, Sherman has inserted backgrounds after the portraits were completed.

While I was touring the exhibit, I noticed a woman with straight long grey hair and a very familiar face. I thought that she might have been Cindy Sherman. The exhibit had that effect on me. Upon exiting the show of Sherman’s body of work, I was struck with how the photographs executed by an ingenious and talented artist convey memorable and candid images of our society.