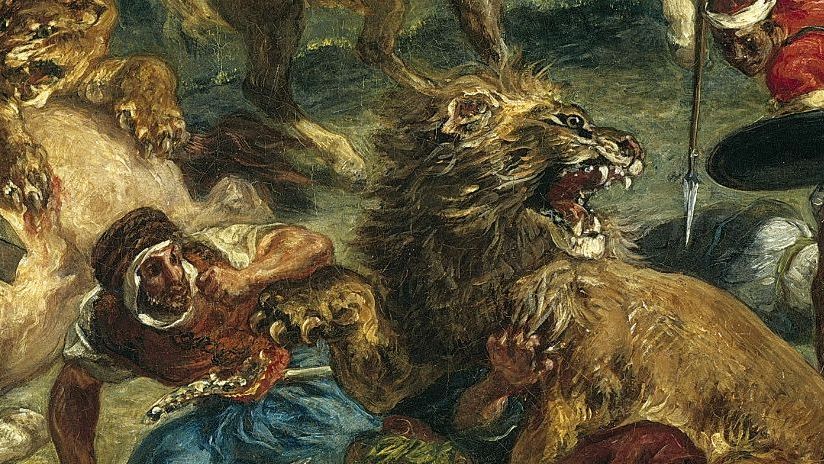 You get a good idea of the esteem in which Eugène Delacroix (1798-1863) was held by later French painters from a small Cézanne, fittingly titled “The Apotheosis of Delacroix.” It shows the older artist being borne heavenward by angels, one of whom holds his brushes and palette, while below his loyal attendants – Monet, Pissarro, Renoir, Cézanne himself – go down on bended knee to their departed hero.

Delacroix, the principal Romantic painter of his generation, appealed to artists desperate for an alternative to the stultifying academic style epitomised by the Paris Salon. His exotic subject-matter, particularly his oriental scenes – the fruits of a trip Delacroix made to Morocco in 1832 – allowed free play to the imagination. His brilliant technique, characterised by expressive brushwork and a vivid colour, was eagerly taken up by the avant-garde. His writings, too, particularly his celebrated journal, were hugely influential.

Transferring to London from the Minneapolis Institute of Art, this isn’t a straightforward survey show. Rather, it’s about Delacroix’s impact on later artists. It’s small – 60 paintings in 6 rooms – only 20 of which are by Delacroix. If you go expecting to see showstoppers from the Louvre in Paris, you’ll be disappointed: those paintings don’t travel. Instead of the five-metre-wide “The Death of Sardanapalus”, there’s the small autograph replica from Philadelphia; instead of “The Women of Algiers,” there’s a reduced, rather dour version from Montpellier. There’s no “Liberty Leading the People”.

Is there enough of Delacroix here to demonstrate what all the fuss was about? Just about. There are lion hunts, bathing scenes and mythological subjects, as well as more conventional portraits and bible stories, including an impressive “Lamentation of Christ” from Boston. Delacroix’s orientalism is well represented, too, notably by the vigorously-painted depiction of a fanatical Muslim sect, “Convulsionists of Tangier”. Otherwise, what’s exhibited here is mostly small-scale, intimate Delacroix, such as the tiny “Landscape near Champrosay” in room five, once owned, tellingly, by another painter, Camille Corot.

You discover how artists as varied as Courbet, Degas, Odilon Redon and Van Gogh took what they wanted from Delacroix’s art. Other reviewers have commented on the rather ham-fisted way in which the organisers have juxtaposed different works of art in this show, and I agree to some extent. (I’m still wondering, for example, why John Singer Sargent’s portrait of Lord Ribblesdale appears in the first room. I read the accompanying label, and I’m still mystified). Part of the problem lies in the fact that Delacroix’s influence is often difficult to nail down. True, there are straightforward copies here by the likes of Manet and Renoir, but often the appeal of his paintings was more subliminal: their emotional use of colour, their psychological charge, their freedom from the constraints of anatomical accuracy. A good example is Van Gogh’s “Pieta” in room four, a very free copy of Delacroix’s version, taken from a lithograph.

The final room covers Post-Impressionist and Modern works, by which time Delacroix’s influence was certainly far more oblique. There are paintings by Signac and Fantin-Latour, and a couple by Gauguin, who was obsessed by Delacroix, even thinking that he looked like him. Taking us into the 20th century are three Matisses, and, best of all, a fabulous Kandinsky, “Study for Improvisation V” (1910), on loan from Minneapolis. However, the exhibition stops short of Picasso, who famously made 15 variations on Delacroix’s “Women of Algiers” in the 1950s, none of which, sadly, are in this show.

Standing in front of the Kandinsky, which, despite combining all the colours of the rainbow in a glorious riot, somehow manages to make them work as a harmonious whole, I was reminded of the final entry in Delacroix’s journal, which reads: “the greatest merit of a painting is to be a feast for the eye”. The works of art in this show are certainly that.