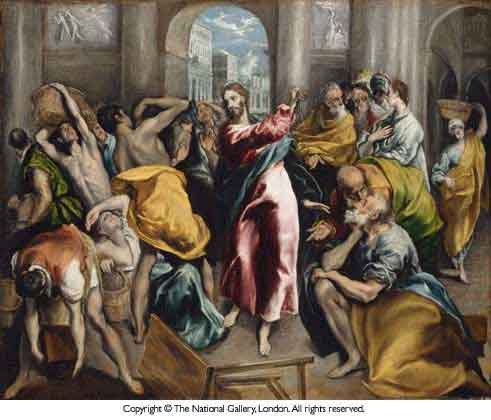 The paintings of El Greco (Domenikos Theotokopoulos, 1541-1614) fall into two distinct categories–the sacred and the secular. The artist relocated from Italy to Spain around 1576, with hopes of becoming court painter to Philip II. Although that goal was not achieved, El Greco found a warm reception in Toledo and received many commissions for church art. This was the time of the Inquisition, a time when the Roman church was the most powerful institution in the Western world, and an era when religion profoundly permeated the texture of people’s day-to-day lives.

A major retrospective of the paintings of El Greco has been organized by the Metropolitan Museum of Art and the National Gallery in London. The first comprehensive look at the artist’s career in two decades, it includes some 70 works, from icons that he painted in his native Greece in his early years, through nearly a decade of work in Venice and Rome where he studied the Renaissance masters, to his later move to Spain where he evolved his own distinctive Mannerist style with great success and became closely identified with the city of Toledo.

For contemporary viewers, the religious paintings for which El Greco is best known probably have far less resonance than they would have had for the deeply devout people of the 16th century. The drama and emotion of canvases such as the Christ Driving the Traders from the Temple andthe artist’s huge masterpiece, The Adoration of the Shepherds (painted for his own tomb), are undeniable, but their impact cannot be expected to register now in the visceral way that they did during El Greco’s time. (The Adoration has left Spain for the first time ever for inclusion in this exhibit.)

On the other hand, the secular paintings, especially the portraits, retain their psychological insight and span the centuries without diminution of their impact. Regular New York museum-goers know the Portrait of A Cardinal well, it being a long-term resident of the Metropolitan. A startling and unsettling representation of the cleric who, for a time, headed up the Inquisition, his glasses (which lend an unexpectedly anachronistic quality) frame eyes that surely were darting, aptly described in the fine catalogue for the exhibit as hawkish. Indeed, the entire portrait seems one of a bird of prey, with the elaborate plumage of his crimson cardinal’s robes and biretta, his impatient hand clutching the arm of his chair as if ready to pounce.

Equally familiar is the widely reproduced View of Toledo, one of only two surviving landscapes by El Greco, and a knockout by any standard. The reproductions can’t begin to approach the effectiveness of this large canvas dating from 1597-99. From the shades of green and textures of the grasses and trees in the foreground, to the buildings of the city (the cathedral, the royal palace) seemingly organically rooted in the rolling landscape, to the high drama of the lowering clouds pierced by a mystical light, this is an iconic work that exemplifies El Greco as artist–it isn’t topographically precise, but has been altered by the artist to express the ethos of the city that took him to its heart.

El Greco’s interest in going beyond pure representation and into a mind’s eye depiction of the more profound underlying truths of his subject matter led him to the idiosyncratic distortions that characterize his mature style: elongation of figures, violent contrasts of light and dark, rich colorations–stylistic tools deliberately applied for their expressive effect. It is no wonder that he championed the then revolutionary concept of painter as artist in the world of his time that ranked the painter as a craftsman. It is surely that same approach to painting that resulted in El Greco’s seminal influence not only on a successor such as Velasquez, but on painters of our own time–Pollock, Picasso, Cezanne–leading to his identification as the "first of the moderns."