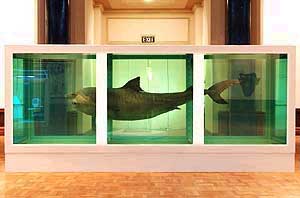 Shark-Infested Waters: The Saatchi Collection of British Art in the 90s

Damien Hirst: The Physical Impossibility of Death in the Mind of Someone Living

Advertising guru Charles Saatchi founded the Saatchi Gallery in 1985 &#147;to familiarize the general public&#148; with what was then-undiscovered, cutting-edge art of the time, and to showcase his personal collections. The assemblage of this raucous, blunt, occasionally sublime work has been christened Britart. Visiting the new gallery quarters, which opened in 2003, is akin to gamboling down a postmodern rabbit warren, inserted into a rewritten Lewis Carroll novel. Tourists visiting the Houses of Parliament are lured across Westminster Bridge to the London Eye, the oversized &#147;Millennium&#148; Ferris wheel directly outside the 1908 County Hall. The Saatchi exhibition is housed in a wing of County Hall, as a kind of meta-installation, shoehorned in between the new London Aquarium and various offices and such commercial establishments as a five-star Marriott hotel and a two-star Travel Inn.

Entering the rotunda gallery hall, visitors to the current &#147;Galleon & Other Stories&#148; exhibition are greeted by a pair of mawkish, gawking, fat American tourists (Duane Hanson&#146;s Tourists II, 1988), in typical consumer-on-the-prowl befuddlement. Though easily mistaken for the real thing, they prove to be made of auto body filler, fiberglass and mixed media with accessories. This morphing of real, surreal, and hyperreal renders them indistinguishable from the crowds in the street outside County Hall and frames the Britart aesthetic of consumable, mediated hyper-reality.

The first work formally is Bryan Griffiths&#146; Beneath The Stride of Giants, a Viking ship made entirely of recycled materials. Serving as the exhibition&#146;s standard bearer, the ship embodies another Britart aesthetic principle– art as archaeology. The vessel itself appears to be carefully hand-crafted from warm, brown woods, but upon closer inspection turns out to be an assemblage of all manner of postmodern cultural effluvia, a veritable Noah&#146;s ark of disposable consumer excess. The Griffiths piece is flanked on either side with several pieces of monument-sized, carved wood statuary by Ann Chu, such as the Tomb of the King and Queen (2002), suggesting mighty civilizations now lost.

For the Galleon & Other Stories exhibition the rotunda gallery houses an array of human, or nearly human, or formerly human bodies. Several works by Damien Hirst (&#147;the guy who does formaldehyde bodies&#148;) are found here, including The Physical Impossibility of Death in the Mind of Someone Living (a seventeen-foot Australian tiger shark suspended in a glass tank) and Lost Love (a square tank containing a medical couch, a trolley, a chair, surgical instruments, and live fish).

Each exhibition bay surrounding the rotunda contains an installation piece. One featured artist is the team of brothers Jake and Dinos Chapman and examples of their works on display include Great Deeds against the Dead (1994) — identified as an interpretation of Goya, dismembered mannequins as toys — and DNA Zygotic Acceleration, Biogenetic, Desublimated Libidinal Model (Enlarged x 1000) (1995), a fused cluster of genital-less pre-teen girls, sprouting erect penises instead of noses, which &#147;create a single hermaphroditic torso.&#148; These have been characterized as a series of fourteen-year-old boys&#146; &#147;gross out fantasies,&#148; playfully transforming human beings into toys, a kind of Kantian purposiveness without purpose, or futile instrumentality &#150; Frankenstein as horror and satire.

For Angel (1997), Ron Mueck positions a more human-appearing mannequin, an angel-as-a-&#147;regular Joe,&#148; sitting on a chair, bored, with nothing to do. The caption playfully suggests &#147;all is well (or is it?),&#148; continuing the collection&#146;s irony mixed with heavy-handed, tabloid-press style overstatement. The works are very bluntly suggestive, but coming from the tail end of the most violent and self-destructive century in human history, where would hyperbole leave off?

There are more mannequin mutants by the Chapman brothers, more Damien Hirst (Hymn, a painted bronze blow-up of a high-school toy human anatomy model), Tracey Emin&#146;s My Bed (1998), (her actual garret boudoir), Ron Mueck&#146;s Dead Dad (a one-meter long naked man on the floor), and other works which &#147;changed British art.&#148; Out one doorway stands Sarah Lucas&#146; Tongue and Groove, a chair clothed in a man&#146;s underwear and a large wooden erect penis penetrating from the seat, formalizing figurative speech &#147;to confront the ridiculousness of sexual stereotypes.&#148; Half blocking another corridor passage stands Gavin Turk&#146;s Pop (1993), a life-size statue (mannequin) of the artist as Sid Vicious as Elvis Presley, pointing a revolver.

The side galleries offer more schizophrenic variety, more nightmarish whimsy, more ironic self-delight, more aesthetic riddles. There are five landscapes by Peter Doig in vaguely expressionist style, free of self-irony. Dutch artist Marlene Dumas&#146; Young Boys (1993) features a row of naked young boys. (&#147;It&#146;s suggestive,&#148; the artist has stated, &#147;It suggests all sorts of narratives. But it doesn&#146;t really tell you what&#145;s going on at all.&#148;) Kate MccGwire&#146;s nearby arrangement of 22,000 chicken wishbones in a hypnotic spiral covers an entire wall.

Progressing down the gallery corridor, moving from one small side room to the next, the visitor encounters more stuff &#150; an electrified room (Richard Wilson&#146;s 20:50), neon signs, more furnishings from fast-food outlets (Mally Mallinson’s JFC Burgers), more art, more clutter. Gavin Turk&#146;s found-object sleeping bag is positioned in the middle of a corridor floor, as if actually being used by a &#147;homeless person.&#148; Here too is Simon Patterson&#146;s parody of the London Underground map, The Great Bear (which replaces tube station names with those of celebrities) &#150; it is for sale at bookstores, poster shops, and souvenir stands all over London. Simon Bedwell&#146;s found posters (2003-2004), Festival of Psychologies and The Rich Will Always Be With Us (and others) line hallway walls like Underground advertising placards.

It is fortunate that the current show mixes in works from the permanent collection. On May 24, 2004, a fire (believed arson) in a storage warehouse in east London destroyed over 100 works from the Saatchi collection. Some celebrated works (by Hirst, Emin, Turk, Gary Hume, Tim Noble and Sue Webster, and others) are now already confined to historical memory. And at least one news dispatch has hit the wire services, ironically noting a work of art in an art gallery in London has been discovered thrown away by maintenance staff, who had mistaken the art for rubbish.

Saatchi has been criticized for his overly enthusiastic collecting and the resultant superabundance of works collected together under one roof at one time. It would be easy to suggest that his vision is too much caught up in his collecting bug and the acquisitive materialist spirit of our age — the Saatchi exhibition is enthusiastically Rabelaisian wicked fun. Beyond the ironic self-parody, frequently puerile preoccupations of the subject matter, and the mask of surface cynicism there also seems to lie a deeply religious, that is to say spiritually thirsty, spirit here. It is summed up in Glenn Brown’s homage Dali-Christ (1992), wherein the great Salvador Dali is revered as the godfather of Britart.