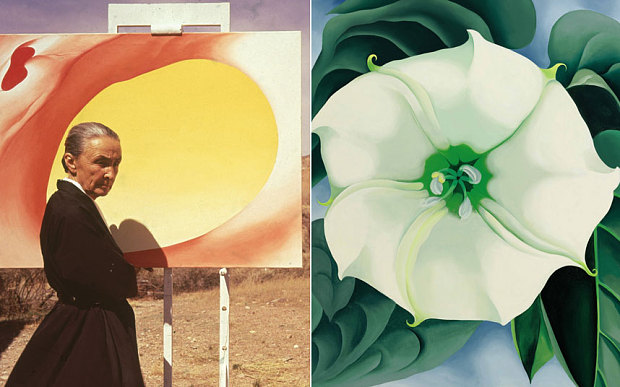 A major new retrospective of Georgia O’Keeffe at London’s Tate Modern seeks to challenge standard attitudes to and interpretation of her work as “flowers that look like vaginas”. It was the artist’s husband, amongst others, the photographer Alfred Stieglitz, who hinted that her work had overtly sexual overtones, that the stylised portrayal of the sensuous folds and petals of plants and flowers, and softly undulating, hillocky landscapes bore more than a passing resemblance to the female genitalia. This was later taken up by feminist artists such as Judy Chicago who claimed Georgia O’Keeffe and claimed Georgia O’Keeffe as one of their own. There is even a reference to this aspect of O’Keeffe’s work in the cult tv series “Breaking Bad”, proving how much this standard view of her has permeated into popular culture.

Marking a century since O’Keeffe’s debut exhibition in New York in 1916, this ambitious retrospective is the UK’s largest ever exhibition of O’Keeffe’s work and features more than 100 works, which have rarely left America since her death in 1986, thus offering European audiences a unique opportunity to explore her work and practice (the exhibition travels to Vienna after London). She was, and still is, a highly influential artist, a foundational figure in the Modernist movement in the USA and the most prominent artist in the avant-garde circle of Alfred Stieglitz (1864-1946). In her lifetime she became an American icon, and remains so, her work enjoying a hugely important position in the canon of American art for its portrayal of cityscapes of New York and vast landscapes of New Mexico where she lived in the 1930s and 40s.

Hot on the heels of the opening of the impressive new extension to Tate Modern, the Switch House, and a £26m revamp, this exhibition is guaranteed to be a blockbuster. O’Keeffe’s work is perennially popular, in part because it reproduces so well. Her “Jimson Weed/White Flower No. 1” (1932), still the most expensive painting by a woman artist sold at auction and the centrepiece of this exhibition, has graced a thousand greetings cards and posters, and her paintings are familiar and instantly recognizable. But the Tate exhibition also contains more than 20 works which have never travelled to the UK before, including “Grey Lines with Black, Blue and Yellow” (c.1923) and “The Black Place IV” (1944), rarely seen on public view anywhere in the world.

In fact the flower paintings occupy only a small part of this wide-ranging exhibition. Broadly chronological in its organization, the first room focuses on O’Keeffe’s debut exhibition at ‘291’ in New York City. Decorated to recreate the décor of 291, here we see O’Keeffe’s earliest mature works in, comparatively large-scale drawings in charcoal and vivid watercolours, which reveal her early interest in abstract organic forms and colour and her developing visual language. Her work is set in the context of its time with photographs by Steiglitz, both of her and of New York. These early rooms also include works by some of O’Keeffe’s and Steiglitz’s contemporaries from their artistic circle, including Paul Strand, John Marin and Ansel Adams (who, like O’Keeffe, has enjoyed great popularity through numerous reproductions of his photographs of Arizona landscapes).

The exhibition unfolds rather like a travelogue with stop offs in New York City whose tall buildings, painted from street level, provide an urban parallel to her depictions of canyons in Texas and New Mexico.

“All the earth colours of the painter’s palette are out there in the many miles of bad lands” – so said O’Keeffe of the landscape she chose as her home, and the landscape paintings are some of the most interesting and arresting works in the exhibition with their Naples yellow, ochres and reds, and in the later, more stylized landscapes which recall Japanese prints – cool blues, ice-cream pinks and bleached whites (“Sky With Flat White Cloud”, 1962).

Bleached whites also feature in O’Keeffe’s pictures of animal bones, principally skulls, which she began painting around 1931, but had collected since 1929. These paintings seemed to summarize the essence of America and have become iconic portrayals of the desert landscape of the Southwest. Later she became interested in painting pelvis bones, exploring the holes in the bones as an aperture to view the deep blue New Mexico sky or a distant landscape. The Southwest is also depicted in a series of “Kachinas”, paintings of Native American spirit beings carved in wood or modeled in clay and painted.

The final room explores her late abstractions and skyscapes, minimalist pieces which represent the view from a plane over the clouds, or the aerial view of a riverbed. Both reveal her awareness of contemporary abstract painting and the Colourfield movement, which dominated American art at the time. These works fully demonstrate that O’Keeffe’s paintings were always rooted in her direct experience of the landscape and her emotional connection to it; this continued to be so until the end of her career.

One of the stated aims of the exhibition, as expressed by curator Tanya Barson, is to present O’Keeffe “in her own words”, and so each room contains an introductory text with a quote from O’Keeffe which gives voice to her creative processes and how she described her own work.