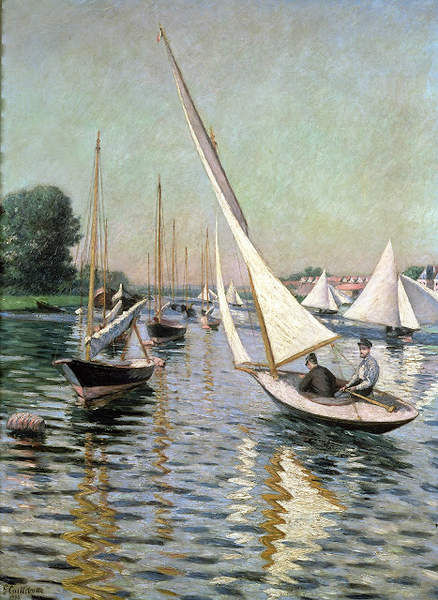 “Régates à Argenteuil” (1893), by Gustave Caillebotte, is among the works in “Impressionists on the Water”
Photo © Comité Caillebotte, Paris

‘Impressionists on the Water’

France can be hot in the summer. But with water on three coasts, as well as complex inland rivers and waterways, France provides ample nautical vacations for its populous. Like many, Impressionist painters enjoyed the natural beauty of France, particularly its waters, on riverboats, sailboats, small rowboats and floating studios.

A delightful and pleasurable exhibition, “Impressionists on the Water” was conceived and organized by the San Francisco Legion of Honor as a tribute to the Americas Cup races in San Francisco this summer. It brings together brilliant art by Monet, Pissarro, Renoir, Sisley, Signac and Caillebotte, among others.

The nearly 60 paintings and several full-size and model boats have been chosen from the Legion of Honor’s own collection, as well as from the Musée d’Orsay, Paris; the National Gallery of Art, Washington, DC; the Nationalmuseum, Stockholm; and the Kröller-Müller Museum and Otterlo, The Netherlands.

The show is organized chronologically, beginning with a glimpse of some traditional and pre-impressionist works. For example, Charles-François Daubigny’s pastoral scene, “The Village of Gloton” (1857) is contrasted by a view of a shipwreck, “Le Naufrage” (1858) by Eugène Isabey.

When the exhibit turns to the Impressionists, one can see the light and color brighten the water and the skies. One standout piece by Claude Monet is “The Floating Studio” (1874). Monet was inspired to work in a floating studio after he learned that Charles-François Daubigny had a similar retreat.

Monet’s fascinating paintings show his familiarity with the Seine river town of Argenteuil, where he lived for seven years. He painted about 175 views of the town, including its port (“The Port at Argenteuil” 1872), peaceful areas (“The Seine at Argenteuil” 1874), deep waters and bridges, (“The Railway Bridge at Argenteuil” 1874). Because each perspective is different, each of his creations appears new and distinct.

Pierre-Auguste Renoir’s “Oarsmen at Chatou” (1879) and “Sailboat at Argenteuil” (1874) present enchanting impressions, both rich in color. “Oarsmen at Chatou” comes alive, in part, because it is populated by boaters, contrary to some of the scenic paintings in the show.

For me, the pieces by Gustave Caillebotte, one of the most overlooked of the Impressionist painters, were a happy surprise. An enthusiastic sailboat racer, as well as a technical innovator in boat design, Caillebotte drew up plans for over 20 modern yachts during his life. “Impressionists on the Water” contains his drawings and models, as well as paintings, including the inviting, well-composed “Régates à Argenteuil” (1893) and the attractive, yet a bit static, “Sunflowers along the Seine” (1885-1886).

Paintings by some post-Impressionists and Nabis close the exhibition. Excellent post-Impressionist paintings by George Seurat, Paul Signac and Henri Rivière used flat ornamental patterns, whereas the Nabis, such as Pierre Bonnard, Maurice Denis and Édouard Vuillard edged more toward symbolism and abstraction.