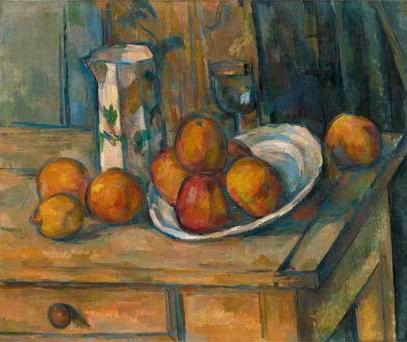 “Intimate Impressionism from the National Gallery of Art” is an engaging exhibition of 68 pieces of excellent, small-scale Impressionist and post-Impressionist portraits, landscapes and still lifes created between 1860-1910 by unparalleled artists, including Claude Monet, Pierre-Auguste Renoir, Vincent van Gogh and Pierre Bonnard.

These paintings, from the private collections formed by Ailsa Mellon Bruce and Paul Mellon, children of the museum’s founder, Andrew Mellon, usually hang on the first floor of I. M. Pei’s East Wing of the National Gallery of Art in Washington, D.C. While that exhibition space is being renovated, San Francisco, followed by San Antonio and Tokyo, will be their lucky temporary homes.

The pictures are intimate in size and style. They were not meant to be placed in large salons or Impressionist exhibitions. Rather, they are moderately scaled for display in the interiors of residences. Edouard Manet’s realistic “Oysters” (1862), for example, was hung in a dining room. Many others show the artists’ favorite places and portraits of familiar people.

The show is organized chronologically, beginning with a glimpse of some traditional and early Impressionist canvases by Corot and Manet, and ending with Post-Impressionist paintings by Edouard Vuillard and Pierre Bonnard, members of a group known as the Nabis (Hebrew for “prophets”). Bonnard’s colorful compositions, painted as late as 1944, still bear the hallmarks of Post-Impressionism.

The show’s intimate compositions are often prime examples of the artists’ oeuvres. For example, there are beautiful still lifes by Paul Cézanne, especially “Still Life with Milk Jug and Fruit” (ca. 1900). Racehorses and ballet dancers by Edgar Degas are included, as well as some lovely portraits by Pierre-Auguste Renoir. Yet, there are some intriguing examples that vary from artists’ typical offerings, such as Vincent van Gogh’s serene “Flower Beds in Holland” (ca. 1883) and Edouard Manet’s “Oysters” (1862).

Of special interest are pictures by lesser known artists. Antoine Villon’s vivid “Mound of Butter” (1875/1885) is both a technical marvel and a luminous composition. Berthe Morisot’s contemplative “The Artist’s Sister at a Window” (1869) is the only effort by a woman artist in this exhibit. That is fitting, since she was the only woman whose paintings were shown in the first Paris Impressionist exhibition. Morisot was married to Manet’s brother, was close friends with Renoir and was taught by Corot.

The Fine Arts Museums of San Francisco have presented a series of captivating and educational Impressionist and Post-Impressionists shows in the past six years. The Legion of Honor’s “Intimate Impressionism from the National Gallery of Art” is another winner. I highly recommend it.