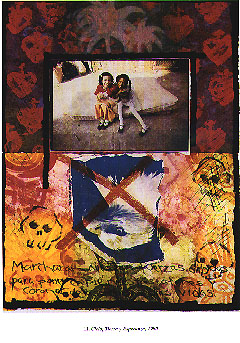 Recent headline events taking place in Vieques make it eminently clear that the movement for Puerto Rican independence is still very much a political reality. The printmaking of Juan S�nchez not only embodies that politicalconviction, but extends to the broader ethos of the NeoRican – urban, North American-born, of Puerto Rican heritage. S�nchez’ art is an expression of a remarkable culture, the strange and wonderful progeny of colonial history, economic oppression, racism, and the mingling of multinational cultural threads.

Political themes predominate in this retrospective of S�nchez’ graphics, which includes prints from 1984 to 1997. There are heroes of the Puerto Rican nationalist movement like Lolita Lebron, Juan Antonio Corretjer, and Isabelita Rosado; there are the anonymous victims (see Puerto Rican Prisoner of War, left); there are children in traditional costumes. Equally as important are the subjects of family and deeply held religious belief, with a series of homages to S�nchez’ mother, often linked with images of the Virgin Mary. Though devout, S�nchez is consistent in his politics – he is not above criticizing the Roman church, historically an important Colonialist institution

But it is the master printmaker’s techniques, combined with S�nchez’ vivid imagery that allows these works to transcend the merely topical. In particular, chine colle, a collage-like technique applied to various printing processes, results in unique combinations of color and texture, not generally achieved using simpler methodology. He often superimposes on a photographic image an overlay of strong, tropical colors, using an iconography that includes spirals (a sun symbol of the indigenous Caribbean Taino peoples), palm trees (often inverted to create a deliberate sense of dissociation), crucifixes, mask-like faces recalling pre-Colombian art, the flag of Puerto Rico.

S�nchez’ palette varies from almost monotonal darks, which he says is from his urban side, to brightly saturated reds and yellows. Claiming the color field painters (Rothko, Noland, Newman) as an important influence, S�nchez is a versatile colorist – in his lighter moods the colors grow gentler, more playful, as in his charming Alma/Liora (1991), a joint portrait of his wife and daughter, enveloped in hearts of blue and pink. The political newspaper clippings remain in evidence, but are pushed to the background by a field of pastel flowers.

Juan S�nchez uses his virtuosic command of multiple printing techniques to create a unique synthesis of the remarkable diversity of his cultural roots and political history, expressing in his art the fervor of an activist for social justice.