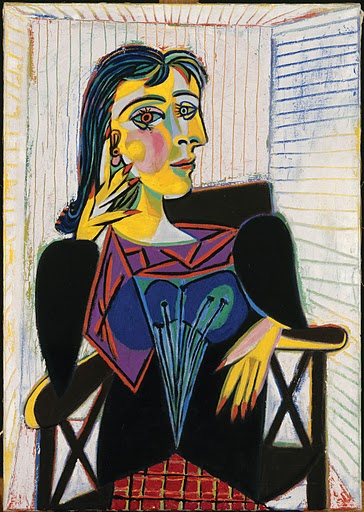 San Francisco’s de Young Museum has again brought us magnificent works from an illustrious French museum. This time, the Musée National Picasso, which is undergoing renovations until spring 2013, has provided the de Young with prime examples of the iconic works of Pablo Picasso (1881–1973) through all his artistic phases.

The Musée National Picasso, situated in the 17th-century Hôtel Salé in the Marais district of Paris, opened in 1985. The museum is the repository of over 3,500 works from Picasso’s personal collection, which he bequeathed to the French government.

As the de Young’s Museum Director John E. Buchanan Jr. explained, this fascinating show is the third recent French exhibition at the de Young. The first was “The Birth of Impressionism” followed by “Post-Impressionist Masterpieces” (both lent by the Musée d’Orsay in Paris). The current “Picasso: Masterpieces from the Musée National Picasso” explores 20th-century modernism. Comparing the three exhibits, one can see how the Impressionists and Post-Impressionists influenced the roots of modernism.

This exciting exhibit includes more than 150 paintings, sculpture, prints and drawings from the Musée de Picasso’s permanent collection. It follows a linear trajectory from 1901 to 1970, thus elucidating Picasso’s several and interconnecting artistic styles, his rose and blue periods and his experiments with expressionism, cubism, neoclassicism and surrealism.

The earliest piece in the show, an oil on wood, “La mort de Casagemas” (The Death of Casagemas), is a small but powerful funereal depiction of his close friend who had committed suicide over a woman’s rejection. In this 1901 portrait, we can see Picasso’s experiment with Van Gogh’s style. It is thought that Picasso’s shock and sorrow over Casagemas’s death may have caused him to begin to use somber blues, then, muted rose tones.

A prime example of Picasso’s surrealism is his 1932 oil on canvas, “Nu couché” (Reclining Nude) of Picasso’s then mistress Marie-Thérèse Walter in post-coital bliss. Walter dominated his works for about ten years, with successive portraits, including, “Accouplement” (Coupling) and “L’étreinte” (The Embrace).

During the Spanish Civil War, Picasso was exiled from his home country because he opposed the rise of fascism. He used his art, however, to further his cause of a free Spain. For example, in the 1938 charcoal on canvas, “La fermière” (The Farmer’s Wife) the rooster crowing to rouse the sleeping farmer’s wife represents his call to awaken Europe, which was ignoring Spain’s losing fight against the fascists. “La femme qui pleure” (The Weeping Woman), a 1938 etching and scraper with aquatint ground, is a moving image of his weeping mistress, Dora Maar.

As I viewed the exhibition, I was struck with the power and beauty of Picasso’s sculpture. The breadth of his talent can be seen by comparing “Tête de femme”, “La chèvre,” (The Goat) a bronze life-sized image of a goat, and the almost two-dimensional life-sized bronze bathing figures completed in 1956, “Les baigneurs” (The Bathers). This six-piece collection is enhanced by pieces of found art, such as cast off wood and a shovel.

Toward the end of life, Picasso continued to experiment with art by using a childlike innocence in some pieces and introducing new themes of matadors and musketeers to his work. One of the final paintings in the exhibit, “Le matador” (The Matador) is a thickly painted oil on canvas, of the artist holding a sword and a large cigar. His zest for life never left him.

It must have been difficult to select 150 works of art from the Musée National Picasso’s large collection. Yet, the exhibition has been curated with intelligence and artistry. It allows us to see the full scope of Picasso’s enormous talent grow and change through his long career. This assembly is concerned with Picasso as an artist. No moral judgments are made about his life, personality or politics.

Each work is lit with simple white light to let the art speak for itself. The show lacks the long commentaries that typically cover museums’ walls. I recommend the audio tour for those who are interested in learning more about Picasso.

This exhibit packs tremendous visual, emotional and intellectual wallop. San Franciscans and visitors should make plans now to see this impressive show. The de Young is the final North American venue for this exhibition; it can next be seen in Sydney, Australia.