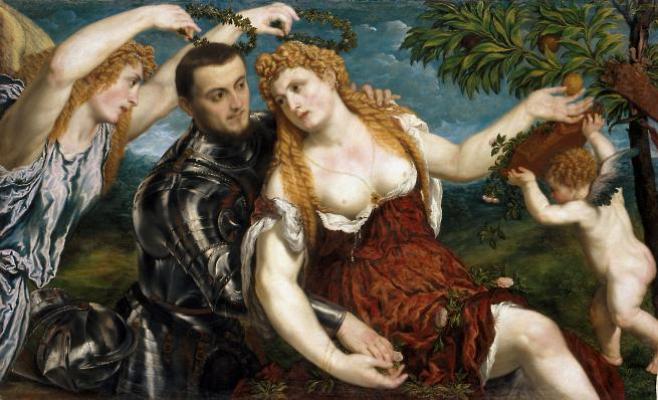 “Allegory of Mars, Venus and Cupid,” by Paris Paschalinus Bordone, ca. 1560, oil on canvas
Picture courtesy of the deYoung Museum

Masters of Venice: Renaissance Painters of Passion and Power from Vienna’s Kunsthistorisches Museum

It’s another coup for the de Young Museum — while renovations are underway at the Kunsthistorisches Museum of Vienna, 50 of the finest 16th century Venetian paintings are on display in San Francisco.

Painting by all the “greats” — Giorgione, Titian, Tintoretto, Veronese, and more — are on show, presenting a wonderful opportunity to see gorgeous high Renaissance pieces that are unlikely to be shown outside Vienna again. The exhibited paintings include portraits of prominent men and women of Europe as well as mythological, historical and religious subjects.

The Venetian painters had recently moved away from the use of egg based-tempera to oil-based paints. Oil paints have a more vibrant finish, mix into more subtle gradations of color and allow more varieties of brushwork.

Aided by oil paint and their inherent talent, the artists moved beyond the representational art of their immediate predecessors and looked further into the Italian past of Leonardo da Vinci. They favored infinite varieties of light, added dramatic and emotional content, created sensual touches with gold leaf and velvet clothing, concentrated on small yet significant reflections and details, and used landscape and well as portraiture.

The highlights of the exhibition are the 15 paintings by Tiziano Vecellio (1488-1576), known as Titian from his frequent use of the color in his paintings. Although Titian began his career as a student of Giorgione, the student’s talent and fame soon overtook the teacher’s, when Titian began using dynamic colors and creative backgrounds. For example, in “Mars, Venus and Cupid” (c. 1530), Titian’s imagination and eroticism are well displayed. We see Mars and Venus kissing with Cupid looking on (right). Venus’s dramatic pose and Mars’s muscular arm add movement and life to the painting.

If one compares Titian’s “Mars, Venus and Cupid” to the “Allegory of Mars, Venus, and Cupid” (ca. 1560) by Paris Paschalinus Bordone (1500–1571), the difference is palpable. Titian’s work appears more animated. It focuses the eye more on the openness of the female body; the kiss is sensual. Bordone’s painting seems static. Mars and Venus do not kiss. In fact, Mars doesn’t seem very interested in Venus, as his weak hand is barely touching hers. In both compositions, Mars’s helmet gleams in the lower corner, although Titian’s helmet reflects much more light and detail than does Bordone’s helmet. Finally, Titian’s landscape background is dramatic where Bordone’s is simpler and static.

Spending time looking at the features of each of the fifty artworks will add enormously to one’s enjoyment of this exhibit. One of my favorites, “Susanna and the Elders” (c. 1555-1556) by Jacopo Robusti-Tintoretto (1518-1594) is a complex piece retelling the story of Susanna, who while bathing, is spied on by two judges. They try to blackmail her into having sex with them. When she refuses, they accuse her of adultery, but she prevails with her honor intact.

In “Susanna and the Elders,” Tintoretto masterfully recounts the story by placing Susanna in the light of an enclosed garden, near a fountain, with a mirror. These symbols of purity are juxtaposed to the elders, who, hiding out of sight, resemble evil satyrs. The water, use of light and dark, the jewelry, the mirror, the background landscape all add to the creativity and beauty of the painting.

Exploring the finest of 16th century Venetian paintings is a rare treat, even for those who lean toward Impressionism and modern art. In fact, Titian, among others, strongly affected European art, with disciples over the centuries including Peter Paul Rubens, Diego Velázquez, Rembrandt, Eugène Delacroix, and the Impressionists.