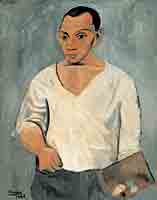 Jealousy, fear, spite, exhilaration, a deep respect &#150; all are evident in the decades-long interaction between Henri Matisse and Pablo Picasso, now explored in a traveling exhibition at its final stop, the Museum of Modern Art&#146;s temporary home in Queens. Beginning in 1906, the dialogue between the two painters resulted in some of the twentieth century&#146;s greatest works of art.

Some museumgoers may be wearied by long lines, higher ticket prices, and the endless marketing of posters, postcards, calendars, notepads, and other paraphernalia associated with blockbuster shows. Seeing Picasso&#146;s Les Demoiselles d&#146;Avignon hanging next to Matisse&#146;s Bathers with a Turtle astonishes the viewer enough to banish all such irritation and jadedness. These paintings, familiar as they may be, are still breathtaking, energetic, and mysterious. The wonderfully articulate, detailed catalog for the show discusses how each work challenged the traditions of Western painting. Both began as narrative paintings: Les Demoiselles was to show a medical student entering a brothel while the Bathers was to show swimmers on a beach, one wringing her water from her hair. The narrative set pieces to be referenced were classical: the former, a faun surprising a group of nymphs, while the latter was Venus rising from the waves. But in painting Les Demoiselles, Picasso ended the narrative, or at least began a different one, by turning each figure so that she confronts the viewer from a separate space. Combining Iberian sculpture, African masks, El Greco&#146;s painting of light, even some subtle lessons in color from Matisse, Picasso created a masterpiece that pleased almost no one, but changed almost everything. Matisse&#146;s response &#150; seen here as a direct response, side-by-side with Les Demoiselles &#150; was Bathers with a Turtle. Where Picasso&#146;s demoiselles confront the viewer, Matisse&#146;s figures are turned inward, away from the viewer, against a background of strong horizontal solids. In the ground of Bathers, Matisse&#146;s study of Giotto is apparent.

In the New York show, it is possible to stand in front of Les Demoiselles d&#146;Avignon and Bathers with a Turtle and see two other pairings from these early years of conversation. Matisse&#146;s Fauvist masterpiece Le Luxe I is paired with Picasso&#146;s Boy Leading a Horse. The pastoral lyricism and supernatural colors in Matisse&#146;s great work are in sharp contrast to the austere palette and almost conventionally-drawn figures in Picasso&#146;s painting. Here, Matisse seems more willing to take risks. Another pair of paintings that can be seen from the same vantage point as Les Demoiselles and Bathers sets Matisse&#146;s Portrait of Madame Matisse next to Picasso&#146;s Woman in Yellow. It is fascinating to see the mask-like faces in Les Demoiselles echoed in Matisse&#146;s final portrait of his wife (and also in another Matisse portrait, Portrait of August Pellerin II). It has been suggested that the arresting, impenetrable black of Madame Matisse&#146;s eyes indicate profound wells of need that can never be met, emotional black holes. However, looking at the portrait in its entirety, it is also possible to see that Matisse has painted his wife as a kind of empty gray ghost, possible to interpret the darkness of her eyes not as need, but as absence. Beside this portrait hangs Picasso&#146;s arresting Woman in Yellow, with another mask-like woman&#146;s face confronting the viewer. In this portrait, the figure&#146;s arms are curiously muscular and the fierce hatchings that mark and surround the figure have an almost violent quality.

In all, there are more than thirty pairs or groups that contrast the two painters&#146; approaches. In some instances, two paintings may have been produced at the same time and may represent direct responses to the other&#146;s work; such direct influence and conversation is well documented. In others, the curators have grouped works that may lack chronological affinities, but are revealing in other ways.

An example of such a pairing is Matisse&#146;s Still Life after Jan Davidsz. de Heem&#146;s &#145;La Desserte&#146; with Picasso&#146;s great Mandolin and Guitar. Painted approximately nine years apart, these works are dazzling together. It&#146;s an old cliche that Picasso is the painter of line and Matisse is the painter of color. Seeing these two paintings side-by-side proves that such reduction is impossible in the work of two masters. The purity of color in the tiles and sky of Mandolin and Guitar seen next to the rhythm and animation of Matisse&#146;s lines in his Still Life proves that each painter had a profound understanding of both color and line.

Matisse once said to poet and painter Max Jacob, who was a friend of Picasso&#146;s "If I weren&#146;t doing what I am doing, I&#146;d like to paint like Picasso." "Well," Jacob said, "that&#146;s very funny! Do you know that Picasso made the same remark to me about you?" The dialogue between the artists continued throughout the first half of the twentieth century and the curators of the New York show have created a great occasion for celebrating and exploring this long rivalry. In the context of each painter&#146;s considerations and reconsiderations, novel and discarded approaches, it is possible to see even the most familiar of these paintings as vibrant, thrilling, and alive.