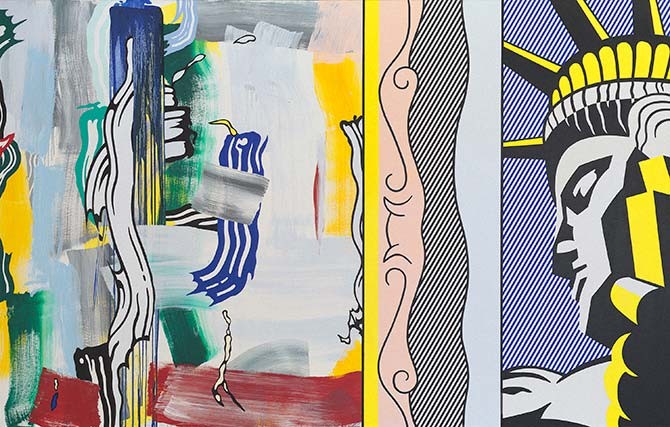 Abstract impressionist and other works from the Robert & Jane Meyerhoff Collection

While the East Wing of the National Gallery of Art in Washington. D. C. is being renovated, the de Young Museum is the fortunate venue of the outstanding modern art collection donated by real estate developer, Robert Meyerhoff and his art-knowledgeable wife, the late Jane Meyerhoff.

Highlighting the show are important works by Abstract Impressionists, including Hans Hofmann, Joseph Cornell and Ad Reinhardt, and the Pop Artists and Minimalists who followed them, including Roy Lichtenstein, Barnett Newman, Frank Stella and Robert Rauschenberg. The forty-six creative, captivating and exceptional pieces of post-World War II modern art from the Meyerhoff Collection display brilliantly in the de Young’s vast, well-lighted white-washed galleries.

The Meyerhoffs began collecting Abstract Impressionist art in the 1950s. The first gallery of the exhibit, which is the only room in chronological order, contains some of the collection’s early treasures. Among them are paintings by two artists, both born in Germany in the 1880s, which are shown in stark contrast. Hans Hofmann’s vivid, layered, extraverted “Autumn Gold” (1957) is on the opposing wall from Josef Alber’s quiet, thinly-painted “Study for Homage to the Square: Light Rising” (1950).

One of the highlights of the exhibition, for which the Meyerhoffs contributed the purchase funds, is the fifteen-canvas work painted between 1958-1966, “The Stations of the Cross: Lema Sabachthani” by minimalist Barnett Newman (1905-1970). The work is in a separate rectangular room of the approximate dimensions and layout originally designed by Newman to house them.

Consisting of fourteen canvases and a fifteenth additional piece, a type of coda (“Be II”), all in black, white, gray (only in the “Twelfth Station”) and the color of the raw unprimed canvas, the creation is unusual for Newman, a secular Jew. The Aramaic title, which Newman translated as, “Why did you forsake me?” is thought to be more about the cry of the human condition, Newman’s ill health and dejection at his lack of recognition than about the locations of Jesus’s travails. In a video, which perhaps should be seen prior to viewing “The Stations of the Cross,” a dapper Newman discusses his masterpiece.

Of the three works in the exhibition by Frank Stella (born 1936), two — the felt and paper on canvas collage, “Chodorow II”, (1971) and the florescent-painted urethane enamel, etched aluminum, and fiberglass sculptural piece, “La scienza della fiacca (4x)” (1984) — are effectively hung opposite each other in a long rectangular gallery.

The earlier, somber-colored “Chodorow II” is part of a 130-piece grouping that Stella titled after 17th and 19th century Polish synagogues that were destroyed during World War II. The brilliantly colored, three dimensional construct, “La scienza della fiacca (4x),” or “The Science of Laziness,” is from a series of forty-eight metal reliefs, each named after a story in Italo Calvino’s Italian Folktales (1956). Although the piece may appear haphazardly composed, Stella carefully planned it in advance, created it at a workshop and then painted it at his studio.

Although almost an entirely American art show, the one piece by French artist, Jean Dubuffet, “La ronde des images” (1977) uses a more demure palate than is typical of his paintings. Also in the minority are contributions by three lesser known women artists.

The engaging multilayered oil on canvas, “Agualine” (1980) by Nancy Graves (1939–1995), may have been based on her interest in sea-floor cartography. A friend of Jane Meyerhoff’s, Grace Hartigan (1922–2008) painted her vibrant “Essex and Hester (Red)” in 1958. Agnes Martin’s introspective square, “Untitled #2” (1981) is distinctive in its use of extremely subtle lines of pale blue and peach.

“Modernism from the National Gallery of Art: The Robert & Jane Meyerhoff Collection” is an amazing collection of post-World War II art with examples that appear as fresh and innovative as when created over fifty years ago. Don’t miss this charismatic and exciting exhibit.