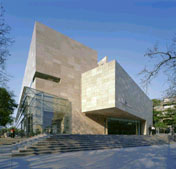 In a city that seems to have a museum on every corner, the Museum of Latinamerican Art of Buenos Aires (called Malba) has the distinction of being the only building in the city built specifically for the purpose of housing a museum. And a handsome piece of contemporary architecture it is, too–the result of a 1997 international competition whose judges included such luminaries as Mario Botta, Sir Norman Foster, and Cesar Pelli. How appropriate that the winners were three young Argentine architects who have delivered an esthetically pleasing building that sits comfortably among its largely high-rise residential neighbors in an upscale section of the barrio Palermo. The building opened in 2001.

The stone-clad exterior defines the spaces within, a glass entryway leading into an airy three-story triangular atrium with gallery space on the second and third levels. The street and below street levels hold the standard amenities, including an auditorium, an interesting gift shop and a restaurant. The atrium is topped with a glass skylight over a metal grid, an arrangement that allows light to fill the space which holds escalators to the upper levels as well as a glass enclosed elevator in the corner.

Malba evolved out of the largesse of the well-regarded entrepreneur and art collector, Eduardo F. Costantini, whose holdings of over 200 works of 20th century and contemporary Latin-American art forms the permanent collection of the museum, exhibited on the second level. (The third level holds temporary and traveling exhibits; on a recent visit there were selections from the Schwartz collection of Dada and surrealist art, previously reviewed in these pages.)

The most powerful statement which the Costantini collection makes, as a whole, is of the profound interconnections between Latin-American and European art. The leading artists of the Americas, especially in the first half of the 20th century, traveled to the major cities of Europe where they participated in the communities of artists and writers within which modernism was taking hold. When these artists returned to their native countries, they faced the more conservative Academies, the art establishments of their time. Too, the Latin-Americans added their own interpretations and styles within the broader parameters of cubism, expressionism, and futurism.

Prominently displayed is a 1915 portrait by Diego Rivera of the Spanish novelist and critic, Ramon Gomez de la Serna, a portrait which has deconstructed its subject in the cubist manner, showing in the process different aspects of the writer and including his pipe, his writing pen, and some of his books.This is an early Rivera and not especially typical, but it demonstrates the European influence and it shows (not well reproduced here) his remarkable skills as a colorist. Nearby is a self-portrait by Rivera’s wife, Frida Kahlo, herself heavily influenced by the surrealists.

There are other works by artists well known around the world, such as the Chilean Matta, the Cuban Wilfredo Lam, and the Columbian Fernando Botero, but for those visiting from afar, there is, perhaps, greater pleasure in discovering some of those less seen outside of the region. A group of witty watercolors by the Argentine Alejandro Xul Solar are executed in a combination of quirky line and washes of brilliant color. The influence of Miro and Klee can be assumed, but these works express a unique voice in their own right. There’s also great wit in a bronze by Brazilian Maria Martens, "Tamb� Taj�" (1946), the figure of a woman with limbs and hair virtually electric in their edgy lines. Contrast the Martens with another nearby bronze, "Reclining Woman" (1955), by the brilliant Costa Rican Francisco Zu�iga, all volume (vs. line), smoothness (vs. angular), calm repose (vs.nervous energy).

There are works from the more recent movements–pop, minimalist, and conceptual art. The kinetic sculptures of Argentine Julio Le Parc are mesmerizing in their skilled delivery of ever-changing visuals. Antonio Berni, another Argentine, in a large diptych "The Great Temptation," and in a more recent sculpture, "Voracity, or Ramona’s Nightmare," demonstrates graphic concern with issues of sexuality and guilt. Another Buenos Aires sculptor, Leon Ferrari, uses the finest of stainless steel wires hanging vertically, criss-crossed at top and bottom with multi-angled horizontals, together creating a rectangular void of lacy elegance. A recent mulitmedia work by Nicola Costantino, another Argentine, is a neutral-hued frieze in which multiple figures of horses are embracing. It’s a tour de force, seething with sensuality and energy that is contained, but seeks to burst forth from within a tightly controlled space.

A collection of this distinction and selectivity leaves the visitor wanting more, but the limitations of space at Malba also prevent satiation, that overdose of visual stimulation that more comprehensive collections often induce.