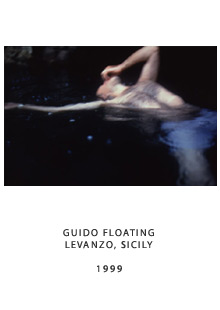 There is nothing unexpected in Fraenkel Gallery’s exhibit of recent works by photographer Nan Goldin. The "Goldin look" dominates–artificially lit portraiture in large Cibachrome prints that are saturated with color, the subjects often enveloped in an intensely golden glow. These are the people in Goldin’s life, her family of choice, and Goldin’s love for them is evident.

The subjects are often nude or nearly so, as in the stunning Valerie and Gotscho embracing (1999). With Valerie’s pensive face seen in profile, she is wrapped within Gotscho’s arms, held, protected. But she, too, holds him, and with his face buried in her neck, he seems to have found a refuge. Intimacy suffuses the work, both physical and emotional, and it is the ability to show both that distinguishes Goldin’s work and makes it memorable. Simon and Jessica in the pool, Avignon (2001) shows a couple, nude, in a swimming pool, their warm flesh colors centered in spotlight fashion against the cool blue-green swirls of the water.

Goldin seems fascinated by water and bathing images. Guido floating, Levanzo, Sicily (1999) achieves a similar effect, without the immediate intimacy that Simon and Jessica offers; perhaps there is a suggested intimacy between artist and subject or that between subject and water–in either case, somewhat less interesting than the more direct depiction of the couples.

Not all these works have such a positive tone. Clemens squeezing Jen’s Nipple, Paris (2001) shows a gay male couple in a physically intimate act, but, even as he squeezes, Clemens is looking away from Jen in what seems a denial of any connection other than the physical one. Goldin’s Self-portrait, red, Zurich (2000) is more mannered than any of the other portraits; she’s blurred the focus, the red light washes the entire picture, darkening her face and shadowing one eye so deeply that it looks bruised.

There are also a handful of cityscapes in the show. The 1999 Skyline from my window, NYC shows dark, lowlying buildings with occasional lights in the windows in the foreground, with the Manhattan skyline and the World Trade Center towers still in the light of dusk in the background, like Valhalla viewed from the realm of mere mortals. As fine a photograph as it is, no one will ever view it now as they would have when it was made.

Much could be made of the emotional underpinnings of Goldin’s work. The early suicide of a sister, foster families, alternative lifestyles, drugs, alcohol, abusive relationships–it all suggests an emotional chaos and instability which is, perhaps, the very source of the creativity and artistic energy that produces these remarkable photographs. From such chaos the artist makes her art and her art, perhaps, is her grip on sanity. Maybe her passion to record her history provides her with a sense of control that has eluded her in other parts of her life.The self-portrait remains disturbing, but Goldin’s ability to record the most subtly intimate connections amongst the people she knows is uniquely moving.