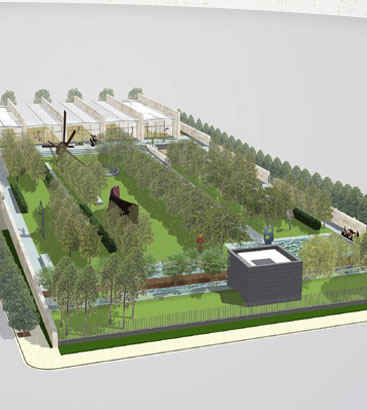 Even an uncaptioned photograph of a building by architect Frank Gehry (Guggenheim Bilbao, Disney Hall) is unmistakably identifiable as his work and no one else’s. There’s a style and a "look" uniquely his own. Similarly, structures by Daniel Libeskind (Jewish Museum Berlin, Felix Nussbaum Haus), Richard Meier (High Museum of Art, Getty Center), and Santiago Calatrava (Milwaukee Museum of Art, World Trade Center Path Terminal) generally bear the unique signatures of their designers. With Renzo Piano, 1998 winner of the Pritzker Prize, the markers are more subtle–the style very much his own, but more elusive, finding expression in different projects in widely diverse ways.

The On Tour with Renzo Piano exhibit was assembled by the architect and his workshop. As displayed at the Los Angeles County Museum of Art, it provides a wealth of information on various Piano projects, conveyed through architectural models (often like pieces of sculpture unto themselves), large photographs, drawings, transparencies, text, books, and video. In the soaring height of the one room exhibit, structural elements are suspended that add yet another dimension to the display.

That this is not a curated exhibit gives pause to some; an "objective" curator might have done more to put the architect’s work in an historical context and, as well, might have made selections from a more "independent" critical viewpoint (an elusive ideal in any case). But, within the context of a showcase that skillfully displays past (and, indeed, future) works of a leading artist of his time, there is no reason to dismiss the exhibit any more than there would be reason to disparage autobiography as a valuable and legitimate form. On the contrary, the exhibit is informative and illuminating, providing valuable insight into the development of Piano’s work.

The very early (1977) and enormously successful Pompidou Center in Paris, with its deliberately provocative, ironic take on modern technology and its exterior escalator snaking up the facade, has become both a beloved resource and gathering place for Parisians as well as a key destination for visitors to the city. Far less accessible, the spectacular "village" of buildings that make up the Tjibaou Cultural Center in Noumea, New Caledonia, is made of of buildings rooted in the native culture, yet utterly unique in style, looking, from some angles, somewhat like unfinished woven baskets with their open spines reaching for the sky. The pattern that emerges from these and other projects, establishes that Piano’s work is deliberately and creatively shaped from the history, the geology, the climate, and the culture of the sites of his projects, with a particular concern for sustainablility and a strong emphasis on airiness, greenery and light.

At the Pottsdamerplatz, Piano had the opportunity to create from scratch a new urban village in the center of Berlin. With theaters, offices, shops, restaurants and a hotel, a neighborhood has emerged that is active day and night, focused on pedestrian traffic, and graced with greenery and water. Successful, perhaps, as urban planning, some who have visited might find the area to be an all too generic highrise environment whose elements do not inspire any sort of esthetic thrill.

In a completely different vein, the enormous Kansai International Airport terminal in Osaka, built on a mile-long artificial island, not only had to meet the practical demands of vast passenger traffic through forty-two gates, but had to comply with complex building regulations designed to cope with the ever-present risk of earthquakes and tidal waves. Surrounded by water, Piano’s solution, crowned by an undulating roof of stainless steel panels, has a remarkable light airiness, its roof shape suggesting water and waves, or (not unrelated) the arching mobile shape of a bird’s wing.

Piano, with fine buildings like the Beyeler Foundation Museum in Basel, the Menil Collection in Houston and the Nasher Sculpture Center in Dallas, is acknowledged to be a leader in museum design. In those buildings, the presence of water, greenery, and the use of natural light continue to evidence Piano’s affinity for these elements and the unifying esthetic of his work. New commissions for the Los Angeles County Museum of Art, an addition to Meier’s High Museum in Atlanta, the controversial expansion of the Whitney Museum in New York, and the California Academy of Sciences in San Francisco’s Golden Gate Park will provide an ever-widening public the opportunity to experience the results of Piano’s creative response to the multiple challenges of creating important public buildings.

Great museums may be the cathedrals of modern times, but new houses of worship also present the opportunity for the expression of modernism. Such buildings are intended to inspire a mood of reverence and awe in and of themselves, as contrasted to museum buildings which, many will argue, should be functional backdrops that do not compete with the collections they are created to showcase. Piano’s Padre Pio Pilgrimage Church in Foggia, Italy, is a stunningly original, impressively massive structure which seats 6,500 people on the inside, with the capacity for another 30,000 of the faithful in the outside plaza. Local stone is the basic structural material, enhanced by laminated timber and stainless steel; the church is topped by a preoxidized copper roof.

Another of Piano’s in-process projects is the new headquarters for the New York Times Corporation, a massive office tower of such lightness and transparency that the model seems to float in space. A tapered spire at the top adds to the effect and suggests both the aspirations of the communications giant and the future world of wireless communications, not to mention assuring the building a place in the New York skyline.