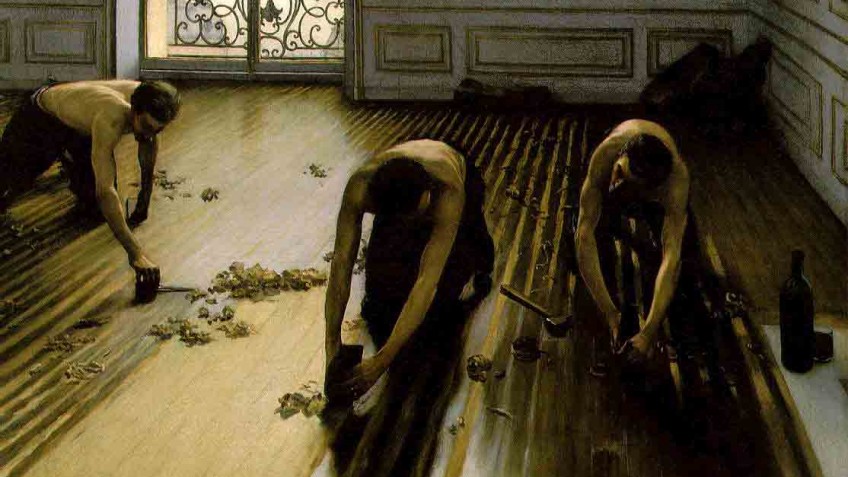 At the end of the twentieth century, Paris&#146; magnificent Gare d&#146;Orsay train station was transformed into a great museum, the Musee d&#146;Orsay. Nearly a century before the d&#146;Orsay was remodeled, the city of Paris was transformed by the Baron Georges Haussmann. Narrow, crowded medieval streets became today&#146;s wide boulevards, lined with trees and monumental buildings. Taking the city&#146;s transformation as a central theme, Paris in the Age of Impressionism exhibits paintings, drawings, photography, and ephemera from the d&#146;Orsay, the largest collection of work ever loaned at one time by that institution.

A snapshot immediacy and spontaneity, the rejection of classical subject matter in favor of everyday life, bright colors and the abundance of light–such qualities make Impressionism accessible. They offer a sense of inclusion in the painters&#146; world and a sense that the beauty of this world is always available, can always be seen by certain willing eyes, even on the docks and in the bars. For the Impressionists, the artist&#146;s vision consists not of what you see, but how you see it. In the twentieth century, art historians such as Robert L. Herbert began to show that Impressionist paintings grew from careful, intentional working and re-working, that Monet did not just set his easel down somewhere and dash off a masterpiece like the d&#146;Orsay&#146;s Gare Saint-Lazare.

The fact that the Impressionists and their Paris contemporaries were making art and not documentaries doesn&#146;t diminish the great pleasures to be found in this show. That the Hausmannian transformation of Paris was not universally applauded is also useful to note, although you won&#146;t find much controversy here. What you will find are paintings and drawings that are undeniably the advertised masterworks, as well as other works of art that are small revelations.

The inclusion of Gustave Caillebotte as an Impressionist is comparatively recent. His sharp draftsmanship once seemed out-of-step with the apparent spontaneity of Monet and Renoir, although he played an important role in collecting and exhibiting his contemporaries. Yet his breathtaking Rooftops in the Snow is as spontaneous and natural as any sun-dappled Renoir garden. It&#146;s shown near Gauguin&#146;s The Seine on the Pont d&#146;Ilena, as views of the modern city. Each painting&#146;s subdued palette and the placement of a large section of wintry color &#150; Gauguin&#146;s gray-blue sky and gray-blue-green Seine, Caillebotte&#146;s expanse of snow &#150; evoke an entire season&#146;s chill and quiet.

The Caillebotte masterwork from the d&#146;Orsay is The Floor-Scrapers. This heroic painting shows three men, naked to the waist, working on a wooden floor. It&#146;s a glimpse of just one intensely human process that fueled the transformation and maintenance of Paris. The exhibition&#146;s well-produced catalog notes that these workers toil in one of Haussmann&#146;s new apartment buildings and that critics acknowledged Caillebotte&#146;s originality but found the figures troubling and strange. Michael Marrinan has written persuasively that this painting actually shows laborers completing Caillebotte&#146;s own studio. At the right of the painting, there&#146;s a bottle of wine and a single glass. Two of the workers&#146; heads are tilted toward each other, as though one speaks while the other listens. In such details there is humanity in this painting: a conversation while working, a drink from a shared glass.

As The Floor-Scrapers divulges that the City of Light existed only as the result of grueling labor, Monet&#146;s Men Unloading Coal, painted the same year, presents ordered processions of faceless workers in a murky light that could be dawn or dusk. Also notable for showing the darker side of the City of Light are Degas&#146; once-scandalous Absinthe and Toulouse Lautrec&#146;s Redhead (The Toilette) and Alone, part of his series showing the private lives of prostitutes.

In Marie-Francois Firmin-Girard&#146;s unflinching The Convalescents, painted in 1861, the gray-clad patients in a hospital courtyard are sharply realized. The patient on a bench in The Convalescents wears the same lost and distant expression as the drunken woman in Degas&#146; Absinthe. Such poignant grief, exhaustion, and loneliness are rarely associated with the Impressionists, yet these emotions are at the still and unmistakable centers of these two paintings.

This show offers something of a reversal of Monet&#146;s dockworkers in the exuberantly gorgeous riot of color, Rue Montorgueil, Paris, Festival of June 30, 1878. This is a view of a street seen from the upper floor of an apartment building, flags flying wildly, crowds milling beneath them, all in chaotic, joyous motion. The people who inhabited apartments with such views are seen in portraits, including the show&#146;s only Manet, Woman with Fans (Nina de Callias) and an early Monet, Madame Louis Joachim Gaudibert. Paintings by Alexander Cabanel, James Tissot, and Jean Beraud tell us a great deal about the jewelry and clothes that their subjects wear and the rooms they adorn, if not much about the subjects themselves. These paintings and their subjects are only of moderate interest, although you might get caught up listening for the taffeta rustle of a variously citrus-shaded dress train in the Tissot.

If looking at pictures of wealthy Parisians is a little on the dull side, nothing is dull about this exhibit&#146;s selection of the objects they owned. The Art Nouveau section is the lively surprise of the d&#146;Orsay show. Rene Lalique&#146;s drawings of a necklace and several combs are magical, amazing, especially the sinuous detail and naturalistic shading of Maple Comb and the delicate, ethereal Hawthorn Comb. Majorelle&#146;s Water-Lily Lamp is an exquisite blending of form and function, a note-perfect example of Art Nouveau. The Art Nouveau works, particularly the Majorelle lamp, Gaillard&#146;s Chrysanthemum Comb, and a Pierre Bonnard plate, provide a pleasantly three-dimensional counterpoint to the exhibit&#146;s paintings and drawings. Several other pieces included here have this effect. The anonymous creator of 1892&#146;s Model of the Fa�ade and the Veranda for the The�tre de la Porte Saint-Martin made something interesting to look at, allowing the building to be imagined as a whole, its parts as well as their sum. Also curiously compelling are two small, embroidered silk bands, both showing the same view of Eiffel Tower with some stylized clouds and a hot-air balloon floating behind it.

It could be argued that this show&#146;s only true weakness is its oversupply of Eiffel Tower memorabilia. But those anonymous embroidered scarves are small fascinations and it&#146;s wonderful to see Theophile Feau&#146;s series, The Eiffel Tower under Construction. Also wonderful: Georges Garen&#146;s lithograph, Lighting of the Eiffel Tower for the 1889 Exposition Universelle with Louis-Gabriel Loppe&#146;s spectacular 1889 photograph of the tower illuminated, a reminder that the lighting of cities was once a noteworthy event. Another Loppe photograph, Gare d&#146;Orsay at Night is atmospheric and mesmerizing. The Loppe photograph is not unique in its comparatively late date (1900), since the last section of the show presents a wide range of Postimpressionist pieces. This final group of paintings and sculptures doesn&#146;t have much to do with the transformation of Paris, but such pieces do have the Impressionist spirit of artistic independence and creative energy. There is a spectacular Pierre Bonnard, Twilight (The Croquet Party), a lovely Maurice Denis, The Muses, and two near-miraculous Cezannes, Bathers and Apples and Oranges.

The Impressionists have been great bank for museums for a long time now and there&#146;s no indication that museums will stop planning blockbusters or that patrons will stop paying for them. The d&#146;Orsay show is not daring or challenging, but it isn&#146;t a mere walk through the galleries so you can get to the place to buy another Monet mug/pillow/poster/t-shirt, either. What&#146;s good here is incredibly good, fresh, and astonishing: the luminous white verticals in Toulouse-Lautrec&#146;s Alone, the epic swirls and patterning in Bonnard&#146;s Twilight (The Croquet Party), and the ordinary heroism of Caillebotte&#146;s The Floor-Scrapers.