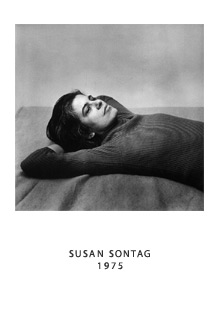 Peter Hujar (1934-1987) paid his dues in commercial photography–magazines, fashion, advertising–on his way to developing his own voice, his own art which is striking in its directness, its disciplined focus and its astringent avoidance of extraneous elements. His milieu was New York and the core of his work was black-and-white portraiture of his friends, many of whom were drawn from the intelligentsia as well as the gay subculture of the city.

The photographs in Fraenkel Gallery’s current exhibit of Hujar’s work date from 1963 to 1982, so, as tempting as it might be to interpolate meanings related to his death from AIDS, it would be forcing a point to do so. An awareness of mortality surely is present here as might be expected even in an artist in the prime of his life. There’s a soulful 1974 portrait of Peggy Lee, elegantly dressed and coifed, heavy makeup failing to disguise the no-longer-ingenue appearance of middle-age. And there are two earlier pictures taken in the catacombs of Palermo. One is of a reclining skeleton, still garbed in its funereal costume of ruffles and flowered headdress. The other is even more startling, for the skeleton is erect–standing in its still preserved boots for eternity.

Hujar seems to have had a preference for posing his subjects sitting or reclining. A 1975 portrait of Susan Sontag, hands clasped behind her head as she lies back somewhat dreamily, captures the strong jaw and chin; intelligence seems to radiate from her face. William Burroughs, David Wajnarowicz (Hujar’s lover), Divine–all are pictured recumbent.

Hujar captures and translates the sensual and the passionate into finely wrought, psychologically perceptive images that retain a classic simplicity. His is a subtle and refined art.