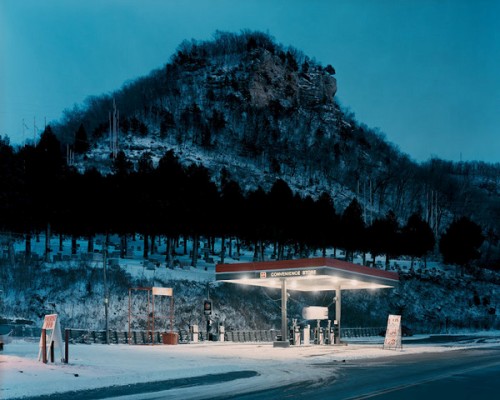 “Cemetery, Fountain City, Wisconsin, 2002”
Photo by Alec Soth (from in the “Real to Real” exhibit at the de Young Museum)

Containing 116 images, the collection is housed in four galleries. Each gallery is devoted to a separate photographic style, rather than to a chronological era. The styles are Everyday (documentary-style photos), Excesses (1970-1980 large-scale hybridized photos used in pop, photorealism and conceptual art), Spectacular (large color prints, some mounted to Plexiglas, emphasis on mass media) and Losses (digital and manipulated photography, nostalgia for the documentary photograph). I found the division by style disjointed. I would have preferred a chronological structure in order to see more plainly how black-and-white photographs evolved into large color and contemporary mixed-media pieces.

Kevin Moore, an international art historian, serves as an adviser to Mr. Traina. Clearly, Traina has benefited from Moore’s advice since the exhibit comprises an amazing breadth of international artists. The collection was curated by Moore and Julian Cox, founding curator of photography/chief administrative curator at the Fine Arts Museums of San Francisco (the de Young and the Palace of the Legion of Honor museums).

Traina discussed his collection at the press preview. His face shined with enthusiasm and affection for each piece. He, like many collectors, seems to love the thrill of the hunt. He related the acquisition back-story behind several works.

I spoke with Daniel Lefcourt. In response to my questions about his experience with Traina, Lefcourt said that first Kevin Moore came to Lefcourt’s studio to scope out his images. Then Traina visited the studio and the sales were quickly made. Seeing Traina’s collection for the first time, Lefcourt was impressed with its balance and with its sense of humor.

Like other artists whose pieces appear in the show, Lefcourt uses photography as an element of his art. He combines photos into one larger work to make a greater artistic statement. For example, “Invention of Public Relations,” combines various artists’ objects that have no sense of perspective.

Nan Goldin’s 2011 work, “Crazy Scary,” began with thousands of images she photographed at the Louvre. She then combined parts of selected Louvre photos with her own autobiographical ones, creating an intimate sensual mix, despite the hundreds of years between the Louvre paintings and her own photographs.

I confess that I was concerned about the Traina Collection because I feared that nepotism might have been involved in the decision to exhibit it. After all, Dede Wilsey, president of the Board of Trustees of the Fine Arts Museums, is Trevor Traina’s mother. However, irrespective of any nepotism that might have been in play, the Traina Collection is outstanding. The photographs and their artists were particularly well chosen and well displayed. And more importantly, it offers the opportunity to increase one’s knowledge, understanding and enjoyment of the art of photography.