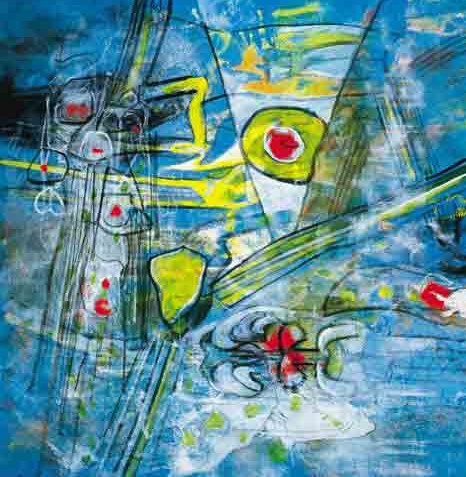 Chile has made a relatively small impression on the world cultural scene. In literature, the country claims two Nobel laureates, Pablo Neruda and Gabriela Mistral. Isabel Allende has made her literary mark, albeit from her United States residence. Raoul Ruiz’ sometimes memorable films are seen around the world and the late Claudio Arrau was acknowledged to be one of the great pianists of his generation.

In painting, only one Chilean name surfaces that is of international note – Roberto Sebastian Antonio Matta Echaurren (1911-2002). Matta studied architecture in Chile and then worked in the studio of architect Le Corbusier in Paris in the 1930’s. Andre Breton invited him into the Surrealist group in 1937, rather late in their history which was largely truncated by the advent of World War II. Matta was influnced by Dali and Duchamp, among others. Freudian concepts of the unconscious mind were central to the style, technique, and imagery advanced by the Surrealists at that time. Matta subscribed to the Surrealists’ "automatic" writing and painting in which it was thought the artist’s unconscious would be revealed.

The style Matta developed then became the touchstone for the work he did for the rest of his life. When he moved to New York at the beginning of World War II, he mixed with the art community there, including Pollock and Motherwell, but Matta essentially stayed with his Surrealistic forms, expressed with his elegant sense of line that defines ambiguously biomorphic shapes, all rendered by a glorious colorist into spirited, sexually charged works. His work has been collected and exhibited by major museums around the world.

Weinstein Gallery, a principal dealer in Matta’s late works, is exhibiting paintings and a generous sampling of the large carborundum aquatint etchings of the 1990’s up to the final etchings completed in 2002 before the artist’s death. These are works of masterful control, ebullient with color and inventiveness. That they remain rooted in the mid-20th century is acknowledged by the artist’s titles, like "Morphologie du Ciel" and "Morphology of Oneness." Matta described his technique as "Psychological Morphology" and used such titles as far back as the 1930’s.

These late works continue the exploration of sexual themes, always powerfully present in Matta’s work. Even the title of Melodia-Melodio, a carborundum etching with glowing yellows offset against a base of deep, brilliant reds, engages in the masculine/feminine dichotomy as confidently as do the playful images. One of the last works, from 2002, La Dulce Acqua Vita (The Fresh Water of Life) is unusual in the directness of its imagery — a female figure, masked perhaps, turning over a jug of water. It’s at once a gifting of the water of life and a letting go of it. But there’s no disquiet here, no morbidity, only a joyful, celebratory mood–dulce acqua is fresh, but also sweet.

(In addition to the Matta works on exhibit, there are paintings by his colleague and friend, Gordon Onslow Ford.)