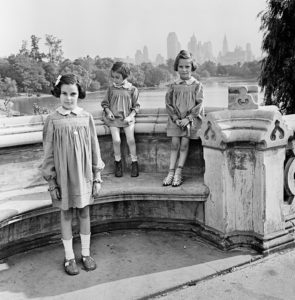 Roman Vishniac (1897-1990) was a photographer primarily known for his widely-circulated 1983 book, “A Vanished World,” which contains evocative black and white photographs of Eastern European Jews on the eve of World War II. Yet the breadth and scope of his talent reaches far beyond the narrow range of these poignant pictures. A visit to the exhibition at San Francisco’s Contemporary Jewish Museum (CJM), “Roman Vishniac Rediscovered,” containing nearly 400 objects, draws attention to Vishniac’s remarkable range of skills as a modern social documentary photographer.

Vishniac’s black and white photographic technique is comparable in quality and style to that of Henri Cartier-Bresson (1908–2004). They both used handheld cameras to capture fresh and surreal black and white images from moments of everyday life. In the late 1930s, both photographers became more involved in political struggles and tended towards photojournalism.

Born in Moscow to a wealthy Jewish family, and after studying zoology and biology, Vishniac moved to Berlin in the 1920s. Although then an amateur, his Berlin photographs chronicle the days of the Weimar Republic with insight and artistry. Taken with his Leica and his Rolleiflex as he walked around the city, these early modernistic photographs reveal his unique framing style and his masterful use of light and shadow. The striking picture of the interior of the Anhalter Bahnhof railway terminus near Potsdamer Platz, Berlin (1929-1930) is a great example of Vishniac’s impressive early talent.

With the rise of Hitler, Vishniac documented Berlin bathed in banners of swastikas and marching soldiers. Often his young daughter Mara appears in the photographs, so if questioned, Vishniac could claim that his photos were not contemptuous or cynical, but merely snaps of his daughter. 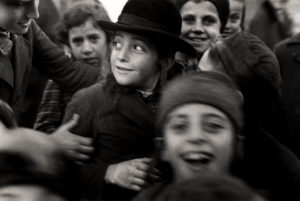 Between 1935 and 1939, the American Jewish Joint Distribution Committee (JDC) engaged Vishniac to document the plight of Jews in the shtetls of Central and Eastern Europe. These photos were used successfully as fundraising tools. Vishniac escaped Germany, to France, and eventually, to New York City. There, in order to support his family, Vishniac began taking portraits of diverse celebrities, including Maurice Chevalier, Imagine Coca, Albert Einstein and Marc Chagall. These well-lit and well-posed formal portraits are in stark contrast to the photos he took for the JDC’s war relief effort in Europe after World War II.

Later, Vishniac resurrected his love of science by developing new techniques to photograph infinitesimal organisms using a microscope, known as color photomicroscopy. His remarkable scientific color photography appeared in hundreds of magazine and journal articles. In fact, you may have seen his image of a firefly’s eye. Don’t overlook these dramatic projections that are in a separate room at the end of the exhibition. 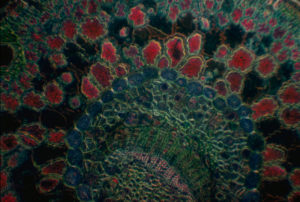 It is hard to imagine that most of Vishniac’s body of work was unseen and unknown until Maya Benton, exhibition curator extraordinaire, tracked down Roman Vishniac’s daughter and collected some 10,000 negatives and 50,000 objects, most of which had never been seen before. The International Center of Photography in New York, which first launched this show in 2013, now shares its Roman Vishniac Archive, through digital images, with the United States Holocaust Memorial Museum. The exhaustive effort to identify the dates, locations and subjects of Vishniac’s oeuvre is ongoing. In fact, attendees of this exhibit in other cities have contributed to the enormous task through their personal recollections. Perhaps you will recognize a city, a street, or possibly, a relative.

“Roman Vishniac Rediscovered” is a remarkable, innovative and diverse collection that shouldn’t be missed.