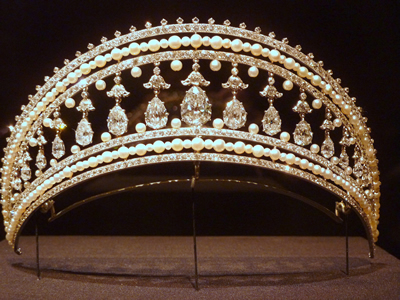 December 19, 2009–April 18, 2010
San Francisco is the only venue for this exhibit.
http://www.famsf.org/legion/exhibitions/exhibition.asp?exhibitionkey=1051

In 1909, the House of Cartier opened its first American store in New York City, at the time the home of over 300 millionaires. Cartier acquired in 1917 its current Beaux-Arts mansion on Fifth Avenue and Fifty Second Street for $100 plus a double strand of the finest natural pearls, then worth $1,000,000. Quite a splash.

Marking Cartier’s 100 years in the United States, Cartier and America concentrates on pieces owned by Americans. These dazzling objects and design drawings are mainly derived from Cartier’s private Heritage Collection and have never been shown in public before. Private lenders in the United States and Europe have also contributed significant pieces to the exhibition.

The exhibition shows the history of the House of Cartier from its first great successes as the “king of jewelers and jeweler to kings” during the Belle Époque through the 1970s, when Cartier supplied jewelry to royalty and celebrities.

More than 200 objects, including extravagant jewelry and accessories of the Gilded Age and Art Deco periods, display an extensive variety of objects from over-the-top white diamond suites to highly colored exotic creations of the 1920s and 1930s.

The Palace of the Legion of Honor is the first American museum to feature the personal jewelry of Princess Grace of Monaco from the time of her 1956 wedding to Rainier III, Prince of Monaco. These, lent by her son, H.S.H. Prince Albert II, include her engagement ring, a 10.47 carat emerald-cut diamond, and a formal diamond necklace.

Dede Wilsey, President of the Board of Trustees of San Francisco Fine Arts Museums, gave some opening remarks before the press preview of the Cartier and America exhibition. She shared with the audience her view that diamonds make a woman look young. She takes her own advice. In pictures of her wearing beautiful diamonds, she looks young and sparkly.

Leaving the omnipresent issue of “Is this Art?” aside, I confess that I did relish my glimpse into Cartier’s opulent world of jewelry and accessories for the royals, the rich and the glitterati.

Many of the objects are absolutely stunning and I was overwhelmed by the show. So much so that it became difficult for me to appreciate the unique artistry of each of the 200+ pieces as each outdid the next. And now I know the differences between tiaras, bandeaus and hair ornaments.

There is a lot of talk about making museums more accessible and more appealing to the public. Cartier in America’s display of brilliant designs and artisanship should appeal to the merely curious as well as to the connoisseur. It’s certainly an entertaining way to spend an afternoon.