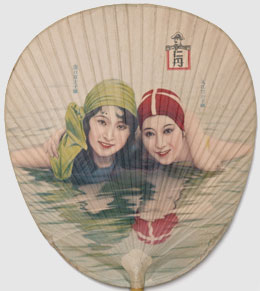 Taking its name from the reign of Emperor Taisho (1912-1926),the Taisho Era designates a brief but dynamic period of cultural change when Japan was becoming a modern, international presence. Some Japanese artists of the period experimented with Western aesthetics and artistic techniques (such as oil and watercolor), while others emphasized traditional Japanese subject matter, materials, and aesthetics such as the romanticized landscapes of nihonga painting. These were also the formative, silent-era years of cinema. The soul of Taisho chic lies in the Japanese flirtation with all things progressive, modern, exotically Western. Curator Kendall H. Brown has captured this essence by framing the exhibit as a meditation on the rise of modan gaaru (&#147;moga&#148;), or the &#147;modern girl&#148; (and &#147;modern boy&#148;), corresponding roughly to the &#147;new woman&#148;&#151;Jazz-Age flappers, pre-Code Hollywood starlets, Josephine Baker and the cafe and night club scene&#151;emerging in the public cultural eye in the West.

As in the West, these new women were typically sales clerks, secretaries, and waitresses, yet found their desires framed in the easy affluence of the newly emerging mass consumer culture. Most striking is Three Sisters (1936) by Shuho Yamakawa, in which three daughters of a wealthy industrialist are formally arranged in and around the family&#146;s luxury touring car. One young woman sits in the rear seat, her face framed by the window, the second sits inside, leaning slightly forward toward the open suicide door, and the third stands, right arm stretched out over the hood, clutching a small purse in her left hand. As the motionless, but aerodynamically designed car suggests speed, so, too, the three poised women are clustered so as to suggest a cascading movement, as if spilling out of the car and into the foreground. All in mute beiges, the four-panel painting captures a formally Japanese jazz-like riff on the dynamic of Deco design.

Another example of East-West hybridity is captured in three variants of Woman (1930) by Daizaburo Nakamura, including the two-panel screen, a full-scale draft, and its reproduction in a painted porcelain Hakata ningyo doll. Daizaburo was noted for his bijinga (paintings of beautiful women), and gracefully suggests Monet&#146;s Olympia in repose on a chaise with his model, Irie Takato, a popular film star of the day. Here the woman is displayed as refined ornament, while in other prints and paintings in the show, the modern girl is rendered in a more Westernized flashy style of sex object, such as the woodblock print Tipsy by Kobayakawa Kiyoshi.

Within Taisho Chic is an entire sub-collection of the very popular and very Japanese medium of the kimono. These range from strikingly bold abstract jazz patterns to traditional Japanese flower motifs, blown up in size and simplified in detail to express the aesthetic of advertising design. Other objects in the exhibition include woodblock prints, scroll paintings, folding screens, textiles, and decorative arts, including hibachis, candle stands, a hand-held fan, and cups and saucers.