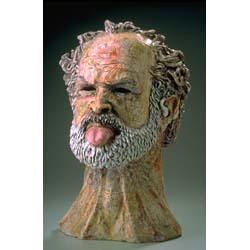 While contemporary American painting seems rather mired down in recent years, in a directionless, fragmented period more market oriented than aesthetically productive, the world of contemporary crafts, in contrast, is flourishing with master artists growing, exploring, and, with unprecedented productivity, turning out works of breathtaking beauty and inventiveness.

Harry Parker, director of the Fine Arts Museums of San Francisco, observes that in most cultures over the course of history no distinction was made, as is done in the West today, pigeonholing craft as functional, art as not. The implication that nonfunctional art has some inherent aesthetic or intellectual superiority over "craft" is a matter of misguided values that simply deprives its adherents of the greater pleasures of openness to a wider range of artistic expression.

In a superb exhibition, the M.H. de Young Memorial Museum is displaying over 200 works from the more than 600 piece crafts collection of George and Dorothy Saxe, influential collectors for two decades who have now promised their collection to the de Young as a bequest, an acquisition which instantly places the Fine Arts Museums into the front ranks of contemporary crafts repositories.

The irony in viewing the exhibit is that there is nearly nothing of a functional nature to be seen – not that its functional nature as a lamp would make Dan Dailey’s witty multimedia Rope Dancer, featured on the exhibition poster, any less a work of art for the light glowing through its blown glass headpiece.

The Saxes started out collecting glass and one senses from the works on view here that, even as they diversified into other media, their first love remained their greatest. The range of technique that is represented – the extraordinary technical virtuosity that is displayed in these works – is astonishing. Glass is free blown, mold-blown, cast, sand cast, anodized, laminated, assembled, fused, leaded, painted. There is float glass, p�te de verre, sheet glass; there is glass combined with different metals, wood, clay, twigs, something called Vitrolite (absent from the Random House unabridged – but see note below) and even (why not?) Fiestaware.

The second room of the exhibition is darkened, with recessed spotlighting of the works in glass making them glow as if from within and turning the entire room into an outsized jewelbox. One is immediately struck by the monumental scale of some of these pieces. That bowl of fruit in the photograph to the left is six feet in diameter and sits on the floor, as if waiting to appease the appetite of some Brobdingnagian gastronome. William Morris’ Suspended Artifact and Scanga and Chihuly’s Rover’s Garden Grows are also works of a scale and complexity that make one think anew about the vast potentialities of glass as a medium.

Utterly different, but surely part of a tradition as old as the Greeks, is Mari Mesz�ros’ elegant and subtle Bad Girls Go to Heaven. Nicolas Africano’s Woman Eating Fruit is a handsome, rather conventional figurative representation which is transfigured into the exceptional by its cast glass medium; it seems to radiate incandescence from its core.

All of these riches and we haven’t talked about the works in other materials: the important deconstructed clay vessels of Peter Voulkos, a pivotal figure in the development of sculptural ceramics; the biting satire of Robert Arneson’s ceramic portraits; the complex fiber works of Lia Cook and Olga de Amaral.

Fittingly, there is a powerful bronze construction by Richard Deutsch hanging on the wall near the end of the exhibit. It elicits a first reaction: "But that’s sculpture. What is it doing in this show?" How brainwashed we’ve been by foolish and arbitrary distinctions! When categorization clouds the ability to see important connections, in favor of perpetuating meaningless perceptual differences, it is time to discard the categories and clear the vision. Great art/craft helps us to see freshly. The Art of Craft accomplishes that as well.

Thanks are due to the Saxes for the perspicacity and taste of their collecting and the generosity with which they now share it.

Note: A reader has informed us that Vitrolite is a trade mark for "glass material that was heavily used architecturally in the 30’s perhaps into the 50’s……drug store fronts and the like. It is solid colored, usually in pastels. So far as I know, it is not being manufactured any more; glass artists who use it (notably William Carlson) are always on the lookout to salvage some."

(Thanks to Jon C. Liebman, Art Alliance for Contemporary Glass)