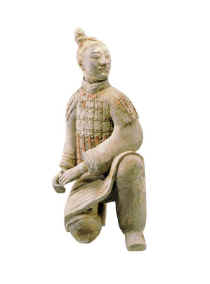 Figure of a kneeling archer

Organized by the National Gallery of Art in Washington, DC, where it debuted last year, and after a stop in Houston, The Golden Age of Chinese Archaeology has reached its last venueat the Asian Art Museum of San Francisco. All the press and publicity it has received could not do justice to the richness and the freshness of this exhibit. It’s an eye-opening, mind-expanding trip into new findings from a very old civilization.

The exhibit can be approached from a number of different viewpoints. In pleasantly dimmed rooms, with focused spotlighting enhancing the drama already present in the artifacts, the San Francisco installation is organized around the archaeological sites from the various parts of China where these objects – some 240 or so are displayed – were found.

The People’s Republic has been highly respectful of its history. As the economic development of China has proceeded apace, construction sites have unearthed new archaeological finds, which then must receive immediate attention. At the same time, the locations of many untouched tombs from ancient times are known but remain unexcavated awaiting the availability of resources for appropriate study – and testing the patience of curious Western scholars.

Still, what has been recovered in the last fifty years is an amazing trove of exotic and beautiful artifacts which have revolutionized contemporary scholarly views of Chinese history and civilization. And, even as history is revealed, new mysteries emerge from the new finds; it’s a full-employment guarantee for archaeologists for generations to come.

The archaeology leads to the history and the history is suffused with cultural anthropology- what were these people like and what were their lives like? How did their societies function? Michael Knight, the Asian Art Museum’s articulate curator of Chinese art, points out, for example, that large and elaborate works of jade, an extremely hard stone which must be ground or abraded rather than carved, lead to an inference of a society that has both the wealth and the social stratification to enable specialization in the creation of such works.

While the focus may be archaeology, understanding that aspect is but part of the richness to be experienced here, for the sheer aesthetic pleasures of the objects themselves are enormously rewarding. Pieces of Neolithic pottery that date back five thousand years or more have intriguing shapes and painted patterns as contemporary in feeling as tomorrow. A bronze owl is composed of separate castings so that there is a removable lid and the beak is a spout – it is a wine container with intricately detailed markings attesting to the sophistication of the artisans’ skills. Inscribed "Fu Hao," the owl is thus identified as belonging to the consort of a king, a woman who led troops into battle more than 3000 years ago.

A life-size bronze figure, which, with its pedestal, stands some eight and a half feet high, dominates its room, its raised arms ending in fingers shaped in circles, thought to have held an elephant tusk. The carefully composed figure gradually tapers from pedestal to neck, with a mask-like face topped by an elaborate headdress. The sweeping curves of the arms energize the weight of the central column of the figure; one can only imagine the tusk providing a further contrast with a dramatic diagonal sweep.

There are elaborate pectorals of jade – jewelry to be worn in the tomb. There is a large chime – a set of 26 bronze bells which practically demand to be rung. There are wondrous figures with deer antlers, a drum stand of writhing serpents, a lacquered coffin with patterned, multicolored birds and dragons.

So much of what survives for modern study and aesthetic pleasure comes from tombs – the burial places of these ancient peoples where they expressed their belief in and need for a connection with immortality. That seems a universal human longing, one with which contemporary viewers can identify. It adds another measure of immediacy to this extraordinary array of treasures.

Foreign Devils on the Silk Road: The Search for the Lost Cities and Treasures of Chinese Central Asia

The Terracotta Army of the First Emperor of China (1999), William Lindesay