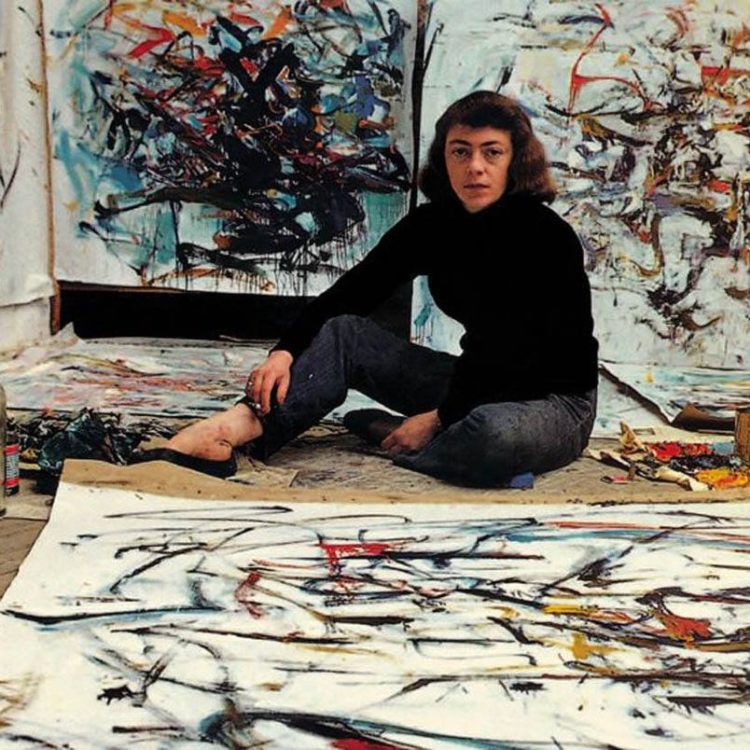 As a decades-long Joni Mitchell fan, I have attempted to explain to others the difference between Joni and Joan Mitchell numerous times. My snarky, short response is, ‘one of them is still living!’ But it’s easy to see just how deep this confusion goes beyond their names. Both women chartered their careers in art and music within male-dominated industries of the 50s-70s. Both defined their own careers, lived life on their own terms, with art at their center. Both are known as chain smokers who have also challenged the logic and questions of interviewers. (Joni stopped smoking after her brain aneurysm in 2015, and Joan died of lung cancer in 1992.) The two have created significant works inspired by tragedy and loss —Joni, the polio survivor, grieving the end of romantic relationships, youth, and the destruction of our environment, and Joan lamenting the sudden deaths of close friends and lovers.

“Over the following decades, she created evocative, commanding works on landscapes, music, poetry, memory, and feeling, and solidified her status as a deeply influential, barrier-breaking artist….” So go the curators’ notes for a new, co-curated San Francisco Museum of Modern Art and the Baltimore Museum of Art retrospective on the works of painter Joan Mitchell. A summary that could easily describe the body of works by singer, songwriter, and painter Joni Mitchell, who is frequently, inefficiently, still labeled a “folksinger.” The simplicity of that categorization diminishes the scope of a great artist who has pioneered several different genres of music and artistic styles.

Through the highly anticipated 2021 retrospective–A Life Lived Through Color– “Joan Mitchell receives full and proper recognition of her impact, innovation and brilliant achievement,” as has Joni, most recently from the Kennedy Center Honors, and the upcoming Person of The Year award from MusicCares. Joni’s much-deserved accolades poetically coincide with the 50th Anniversary of her album “Blue,” touted as one of the greatest albums of all time. Something that has only fully been recognized during the last five years.

The Joan Mitchell retrospective spans over 80 works. And you could say the same for Joni, whose recent laurels are also based on her past body of works that span decades and includes her paintings and artwork, often as the covers of her albums. For Joni, whether she is painting pictures with words or moving paint across a canvas, the process is the same. There appears little difference between the compositional structure of her music and the precise wordsmithing of her lyrics. “You’re a master at your craft…when we listen to you, your voice, your guitar, your careful arrangements, we listen to a great song. And then, you read the lyrics on their own, in the quiet, all by themselves, and you read a great poem. You sing poetry…” President, Joe Biden—Kennedy Center Honors, December 2021.

In October 1957, the first prominent feature on Joan Mitchell’s work appeared in ARTnews. In the article entitled “Mitchell Paints a Picture,” art critic Irving Sandler wrote, “Those feelings which she strives to express she defines as ‘the qualities which differentiate a line of poetry from a line of prose’….” Joan liked poetry; it was vital to her life. Her mother, Marion Strobel Mitchell, was a poet. She also loved music and Van Gogh, seeing herself in his lineage as a painter. Among the curator’s notes of the exhibit is a reference to the “turbulent” indigo brushstrokes of her painting, echoing Joni’s Grammy-winning album by the same name, with a self-portrait as Vincent Van Gogh.

Hidden among many larger paintings in the retrospective is an explosive piece reflecting Joan’s interest in music and poetry titled “Lyric.” Its fluid, quick brush strokes make it feel like an abstract rendering, an etching that seems to portray a jazz musician playing a horn. At the least, it feels like jazz, improvised, raw, dynamic. A similar free-flowing style and palette appear in Joni’s artwork titled “Judy Collins in The Dressing Room,” featured inside her “For The Roses” album. Although it is loosely more figurative, the illustration is drawn with color markers, utilizing speed and abandon in its execution. Both pieces also sweep from right to left directionally, as if both are in profile. “For The Roses” was also the queen of lyrics last, mostly acoustic album before moving further away from her folk roots and deeper into jazz.

Another smaller work–“Untiled (Blue)” 1975 — pastel and typewriter writing on paper—is shaped like a Mark Rothko blue cube with a smudged topping transitioning to purple. At the bottom left reads:

“Blue
No pastel for you
straw-hatted, palming
your erasures, smudging
(the way you do) your blue
could fix for me
(‘blue blue’ you say) the way you make your blue.
And for no reason
my eyes and the sky
cry for you.” Joan Mitchell

With Joan’s interest in prose and music, it would be hard to imagine she hadn’t heard or been inspired by Joni’s song, “Blue,” from the album by the same title since it was released in 1971. It seems that someone with these tastes would be attracted to Joni’s wordsmithing, raw emotional style and the confessional intimacy associated with this groundbreaking album. Could it be just a random coincidence?

“Hey Blue, there is a song for you,
Ink on a pin, Underneath the skin,
An empty space to fill in…

Blue, Here is a shell for you,
Inside you’ll hear a sigh,
A foggy lullaby,
There is your song from me.” Joni Mitchell

Anyone who has forged their own life, who has mastered their own destiny, as these two monumental women have, will be seen as challenging to those who would prefer controlling them through categorization, labeling, or mansplaining. Both women have fought for their right to be themselves as people and artists. And one of them, it was said, could be “difficult and extremely competitive, but also nurturing, generous, and a devoted friend….” This could easily be said about the other. Joni or Joan, you decide.

Virtuoso trumpeter Wynton Marsalis is musical director of Jazz at Lincoln Center Orchestra, and as a composer most known for...
Music