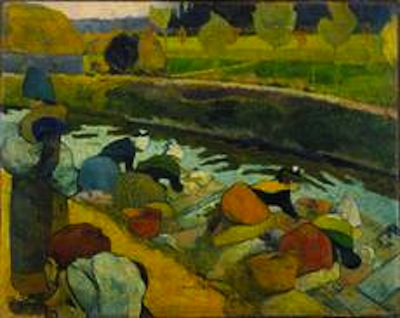 The William S. Paley Collection: A Taste for Modernism

William S. Paley (1901-1990) was the founder of the Columbia Broadcasting System. He grew it into a coast-to-coast radio network with over 70-radio stations, revolutionizing the medium. As CBS expanded, the CBS television network became the country’s most popular source of TV entertainment; its news division was a world leader with journalists of the caliber of Edward R. Murrow.

Paley’s interest in modern art began in the early 1930s. He collected a number of pieces during those years. He bought his first painting, Paul Cézanne’s “Self-Portrait in a Straw Hat” (1875–1876) from the artist’s son. He enjoyed art by a large variety of artists, favoring French artists in the late 19th century and early to mid 20th century. And he chose well.

Georges Braque (French 1882 -1963). Still Life on a Mantelpiece 1920. Gesso, watercolor, and pencil on paper, mounted on board.
The William S. Paley Collection, The Museum of Modern Art, New York

The Modernist and Post-Impression movements were a reaction to the final Impressionist group exhibition in 1886. They introduced two primary trends: the pursuit of formal values (as seen in Cézanne’s reconstruction of the world around him) and the vivid expression of inner worlds (epitomized by the work of Gauguin). The new balance among style, technique, identifiable subject matter, and subjective meaning ushered in 20th century’s art’s abstraction and subjectivity.

Paley had a long and fruitful relationship with New York’s Museum of Modern Art. (MOMA). The museum was founded in 1928 by Abby Aldrich Rockefeller and two of her friends. Although Abby was the wife of John D. Rockefeller Jr., he refused to fund it. MOMA struggled, moving into three temporary locations in its first ten years.

Because David Rockefeller (Abby’s son) knew that Paley was interested in modern art, in the 1930s he asked Paley to become a MOMA trustee. In 1962, he was nominated by then-chairman David Rockefeller to be its president. He became a valued advisor and generous philanthropist to MOMA, For example, in 1968 he joined a syndicate with Rockefeller and others to buy Picassos for MOMA from the wonderful Gertrude Stein collection. He later became MOMA’s chairman and remained in that post until 1985.

“The William S. Paley Collection: A Taste for Modernism” packs a tremendous visual, emotional and intellectual wallop. So please plan to visit this memorable and beautiful assembly.