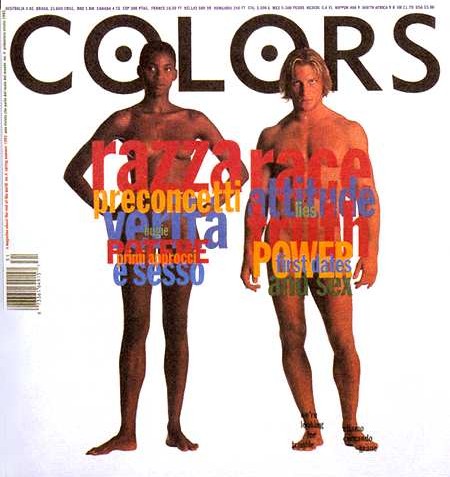 Tibor Kalman (1949-1999) was a revolutionary. In design? Maybe. But we’re talking here, politically. In the 1960’s he was an organizer of the notorious SDS, an organization of student radicals. The SDS – or their spinoffs – used to blow up buildings. With people in them.

Later on in his life, a little more mellow, perhaps, he settled for being called "the bad boy" of graphic design and for actively promoting a more mainstream progressive agenda – pro-environment, antiracism, anti-homophobia – particularly when he was editor of Colors magazine.

Kalman was a contrarian, often playing devil’s advocate. He was a commercially successful designer and he was also a public relations maven – the medium and the message being inseparable. He got paid to both grab the attention and put the spin on copy, graphics, packaging – on the messages broadcast by the very people he seemed to disdain.

Or – another example – he was hired by a real estate developer to apply the marketing techniques developed for consumer products to the selling of buildings, "turning an architectural plan for a featureless tenement into a luxurious dwelling at the threshold of hip" "We did a branding exercise," he said, "branding nothing."

Walking through this exhibition at San Francisco’s Museum of Modern Art, the viewer must shift expectations. It is not about aesthetics; it is about anti-aesthetics. Kalman says at one point, "We’re here to inject art into commerce," but his major focus was what he called vernacularism, "a tool to unhinge the dominance of cold corporate moderism and cool professionalism." Most of the results seem to this viewer to be visual pablum.

That Kalman was effective at what he did, and enormously influential in his field, is undeniable. He was an effective manipulator of image for whatever the purpose of his client, the essence of PR/advertising hucksterism. He was perhaps the design provocateur of the age. Knowing this, it is hard to reconcile the things he did (often not admirable) with the things he said (clever and politically correct). It makes this observer uncomfortably queasy.

Which is exactly what the guy wanted to do.