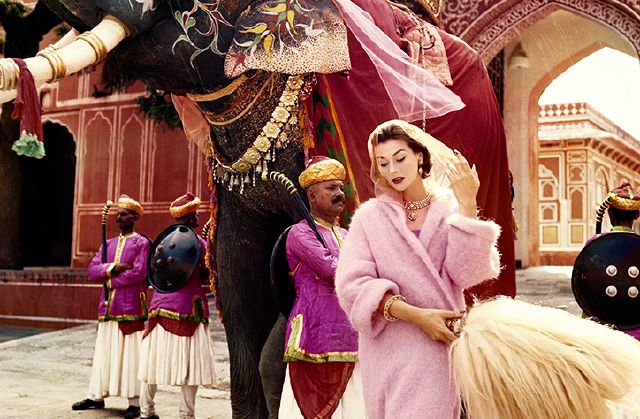 Vogue 100: A Century of Style has just opened at the National Portrait Gallery (NPG) and it takes us back in time and shows us how this internationally renowned fashion magazine has got to where it has today. The way in which fashion filters into our day-to-day lives is dependent on so many avenues: how our friends dress, how fashionistas look or what fashion experts tell us to wear through instagram. Whether we follow a particular brand or designer, there is a fashion magazine that will present them in beautiful photographic form by great fashion snappers including Albert Watson, Peter Laurie, Tim Walker, Patrick Demarchelier to Mario Testino, and the first magazine to do that was Vogue.

The first, ever, print issue came together in 1892 in America and by 1909 the magazine was acquired by Condé Nast Publishers. British Vogue, however, was founded in 1916, due to the difficulty of shipping transatlantic shipments of American Vogue during WWI, and it continues to mirror the time and era it prints its edition, following on from WWII, post-war, the swinging 60s and the noughties.

At the NPG, the Vogue exhibition is divided into two, or at least that is how I saw it. You will get your up-close and personal portraiture with Alexander McQueen with a smoking skull as part of his iconic signature, Jude Law, the Beatles, Gwyneth Paltrow, and many more film actors and fashion celebrities. There’s also moving footage, to dance music, of glamorous Vogue stars and models including Cara Delevingne, Emilia Clarke and Stella McCartney.

There’s a lot to see, that you’ll feel spoilt, including Kate Moss in union jack leather and barely her skirt on in a powerful image taken by Testino in 2008, yet Moss is almost ubiquitous in this exhibition – there are up to 10 images of her in different shoots! Corrine Day’s first breakthrough photographs of her – fresh-faced- are there. These photographs were controversial for being taken in her bare underwear at the pinnacle of the emerging ‘grunge’ trend of British fashion. Not too far from her is a four-foot square photograph of Margaret Thatcher taken by David Bailey.

To your left, the gallery takes a special turn entirely devoted to bringing out the archives of Vogue, which are stored and hidden in the basement of Vogue’s Central London offices. The section chronologies the magazine from the very beginning where art deco drawings were the front cover, going back to 1916. They are kept sealed in glassed boxes as if they were precious treasure that cannot be exposed to air, or dirty hands. Observe on one page a fabulous photograph of Charlie Chaplin in New York by Edward Steichen (1926) and on the other page an article about the revolution of the music device, the Gramophone.

More classical photographs are revealed including Vogue’s war correspondent, Lee Miller, Norman Parkinson, Irving Penn and Cecil Beaton from the 1950s. Moving away from these images are snaps of great creative artists that were celebrities at the time their work was much celebrated including Matisse, Martin Amis, Joan Crawford and Francis Bacon.

There’s also insightful photographs of epic fashion scenery including Walker’s photograph of Helena Bonham-Carter stuck inside a crashed glass elevator in the middle of a field of sweet-peas. You may also learn that up to the fifties, names of models were never disclosed and it was only in the nineties that the supermodels had their own movement and soon became brands. Naomi Campbell, Cindy Crawford, Linda Evangelista and Tatjana Patitz were the epitome of this movement which we see in Peter Lindbergh’s famous cover shot that defined the era.

Vogue 100: A Century of Style is not simply about photographs in history, fashion, or fashion journalism. In fact, it is how photography shifted the way people envisioned themselves in society’s fashion or the flow of fashion in constant flux. How fashion was presented from moving image, to stills, black and white photos or art deco drawings, there was a glue that remained fixed about people’s consumption of fashion and that’s the idea that photographs captured them masterfully. These pieces of the past cannot be lived again but can be remembered through real artistry that is taken and shot by talented professionals. As the exhibition shows, Vogue employed and continues to employ many of them.