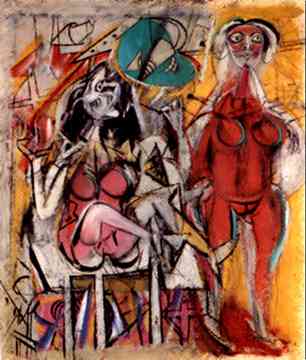 Willem de Kooning (1904-1997) was a giant of 20th century art. Along with Jackson Pollock he was at the center of the New York School which pioneered abstract expressionism in mid-century and dominated western art for decades. While Pollock’s paintings, with their scale, rhythm and "drip" patterning, seem more accessible to the general public, de Kooning’s large paintings deal more abstrusely with issues of space, color, light, and composition. At the same time, the confrontational stance of these works often bewilder more than captivate the more casual viewer.

On the other hand, when the success of abstract expressionism swept the art world, and figurative painting was relegated to the background (see, for example, Leon Golub, Milton Avery, Elmer Bischoff) and was virtually sneered at as retrograde, de Kooning defied the trend and returned to the figure, if, indeed, he had ever fully left it.

Willem de Kooning: Tracing the Figure, an exhibit that originated at the Museum of ContemporaryArt Los Angeles, brings together a substantial group of the artist’s works on paper, concentrating on his interest in the female figure between 1938 and 1955. It’s an exhibit that, in its tight focus, should prove to be of interest both to more sophisticated viewers and to those who are either new to de Kooning or have had difficulty appreciating his work from earlier exposure.

The earliest works on view, such as Portrait of a Woman (1940) or a 1940-41 portrait of Elaine de Kooning (drawn before they were married), are traditionally realistic, demonstrating de Kooning’s skill as a draftsman and providing the starting place for the changes to come. The drawings over the next few years are still completely recognizable as figures of women, but de Kooning has started to break the figures down into their elements, exaggerating here, distorting there, rearranging the lines and curves and volumes, creating abstracted compositions very much influenced by African art, Picasso, and Cubism.

By the mid-1940s, the work grows ever more abstract, though figurative elements can always be found within the compositions. An untitled 1947 oil on paper is one of the few works that includes a male figure. He has a straightforward look of wide-eyed innocence, standing next to the larger female figure who grimaces rather ferociously from a face framed by flowing blond hair, atilt over a body that is an abstract arrangement of spiky lines. It’s an arresting work, suggesting at an intuitive level, but without specifically articulating, something of de Kooning’s psychological interaction with women.

In another untitled 1947 oil on paper, two women are side by side. One is nude, standing, facing the viewer; almond eyes, ovals of the breasts and genitals are emphasized. The other woman is more complex –seated, legs raised, face distorted in the familiar Picasso-Cubist manner. It’s a striking work, full of uninhibited eroticism and brilliantly laden with color (pinks, oranges, greens, yellows). The standing figure seems calm, the seated figure exudes energy, and there’s an abundance of other detail (some identifiable, some not), but it all knits together in a remarkably successful composition.

The seated figure is recycled in the 1948 study for Pink Lady, this time with the standing figure almost faded out of the composition. The face has lost the cubist distortion, though a separate shadow of it peers upward. The large almond eyes are prominent again. The surface has been flattened and the pink lady seems a collection of face, breasts, and legs, all recognizable, but seemingly melting into the pink field. (In 1948 de Kooning had his first one-man show, ten abstract paintings, almost entirely in black and white. In the drawings of the same time, his exercised his stunning skills as a colorist.)

Shifting perspectives, the relationship of the figure to its surroundings, shifting between background and foreground–are constantly in play for de Kooning. That might be seen as an outgrowth of remaining with the figurative, even as he delved profoundly into abstraction.

The drawings from the 1950’s are particularly interesting in terms of the artist’s constant experimentation with technique as well as image. He uses tracing, transfers, erasures, even collage as he seeks to refine and redefine his work. Many of these drawings are the experiments and studies that give him the methodology for the paintings, particularly the iconic Woman I, which was highly controversial when first exhibited. De Kooning has been said to blur the line between drawing and painting, all a continuum of the creative process.