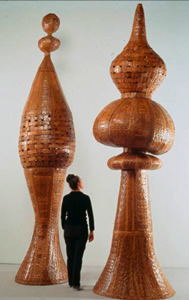 Sculpting a fantasy world out of the mundane, cardboard that is. Ann Weber creates shapes of pods, gourds, Russian samovars and sky-high cornucopias and fantastic personages using the ubiquitous material. “Wonderland”, her recent exhibit (2008) at the Triton suggests shapes out of Alice in Wonderland’s, ‘Queen of Hearts’ garden. Dunce caps atop massive bulbous shapes suggesting figures and/or phallic symbols, stacked to the ceiling or squat and close to the floor, not human but anthropomorphic perhaps; Weber says, ”primal forms”.“ The sculptures are symbolic of male and female forms and the natural world”; also, “there’s a psychological component, neither representational nor literal”. Weber wants it left open for interpretation.

In 1972, Ann Weber started producing high fire functional pottery on the wheel in Ithaca, New York, for People’s Pottery, her retail business. She constructed a kiln in her backyard for processing the ceramics. After 15 years of operating her own business, Ann Weber left New York for California to study with Viola Frey and Art Nelson at California College of Arts and Crafts, where she earned her MFA. The ecologically minded and resourceful Ms. Weber became inspired by the lightness of cardboard and ease of access, (dumpsters ran amok with it) and oh yes, Frank Gehry’s furniture. Ms. Weber wanted to try her hand at making large sculptures and cardboard was a less cumbersome and weighty material than clay and with limitless possibilities; the more tape, creases and advertising on it the better! Shapes reminiscent of sculptor Hans Arp and a little Hans Christian Anderson thrown in there, she forged ahead. Elevating shellac, staples and duct tape to high art and making no bones to be covert about the “glue” either, (Marcel Duchamp and Andy Warhol would have been proud), the recycler started her pioneering process.

In 1999, Weber was introduced to fiberglass when she realized she needed a more durable material that could stand up to the out door environment. In 2000, Oakland Museum presented such an opportunity. A collaboration with sculptor William Wareham entitled, “To Market, To Market”; a huge carriage like construction on wheels, Wareham’s contribution, is overflowing with Weber’s signature shapes out of fiberglass. Then in 2003, she was 1 of 24 artists chosen to create and construct a piece for a new government complex in the state capitol of Sacramento, Ca. The outcome of the project was more fiberglass, “Enough, Not Enough”; a huge basket in the shape of a V, stuffed with Weber’s trademark organic shapes doing a balancing act on a ball; “it’s about abundance”, Weber states, in the face of the ‘haves and have not’.

Fiberglass has a somewhat translucent quality and when surrounded by her cardboard sculptures it appears to have a more delicate quality; a subtle variation. One fiberglass work for the Triton exhibit, “However Many Times it takes” is a large personage with the oft-used dunce cap atop, a nice addition. The adventuress Ms. Weber offers, ”My goal is to make artwork that relates to the site, the environment, the purpose of the space and the people who will be using it”. Weber pushes the limits of hugeness, “or how far you can go with something before it collapses”.

Walking into Ann Weber’s WONDERLAND exhibit at the Triton in Santa Clara, California was quite a surprise, in fact I think I gasped! A smallish room packed with immense delightful sculptures, some almost touching the ceiling straight out of a sophisticated fantasyland. I expected the Mad Hatter or Forgetful Rabbit to jump out from behind! A likely piece was “Simple Joys”, created in 2008, the tallest piece in the exhibit, center stage; a vase like shape at bottom with stackings of round shapes almost to the ceiling, it gave the appearance of a chess piece gone awry. Mark Robinson of the Triton likens Ann Webers’s exhibit to, “a big chess game replete with king, queen, bishop, rook and pawn”! Adjacent to “Simple Joys” was “Almost” an older work created in 2002, classical Weber. Consisting of two large shapes facing each other in close proximity suggesting a connection if moved together but alas, not quite, but…‘almost’.

Weber has made a wall installation of smaller pieces in “Talking With Tuttle”; consisting of acorn, donut shapes and arcs, of a more formal nature. “Cocci”, consists of seven cylindrical shapes created in 2005. “Curiouser and Curiouser”, assembled in 2008, is a colorful gathering of five hourglass sculptures made of wine boxes with labels unhidden, letting the truth hang out as is Ms. Weber’s wont. Another collection of structures, all stand alone pieces in their own right with separate delightful titles, lend themselves also to a grouping: “Alex” an adorable small bronze robot, “Marmalade”, ”Popcorn”, “Drink Me”, “She-She” to name a few of Weber’s fantasy pieces.

Maybe one of the reasons Ann Weber’s sculptures are so beguiling and strangely moving is that they trigger some sort of memory in us, wake up our own innate sleeping child. There is a sweetness, those larger than life childhood toys. She gives us permission to go back and remember.

Ann Weber’s professional credits are nothing to sneeze at; the recipient of several awards, some being the Djerassi Resident Artist, Helen Bing Fellowship in 1999 and the Oberpfalzer Kunslerhaus Resident Artist Award, Schwandorf, Germany in 2007. Galleries representing her work are K Kimpton Contemporary Art in San Francisco, Ca., Donna Seager of San Rafael, Ca, San Francisco Museum of Modern Art Artists Gallery , Claudine Chapline Gallery of Stinson Beach, Ca. the list goes on and on. Solo exhibits at the prestigious Sanchez Art Center of Pacifica, Ca., Oakland Museum Sculpture Court, Fresno Art Museum and San Jose Museum of Art. Ann Weber has been commissioned for public art projects in Phoenix, Arizona, Denver Co., Seattle Wa., and several in California. In 2008 she was an adjunct instructor at Dominican University in San Rafael, Ca. and also in 2006 at California College of Art in Oakland Ca. She has been guest lecturer and visiting artist at several universities around the country.

In 2003, KQED’s Spark featured Ann Weber and her work, “Taking Craft to the Limit”.