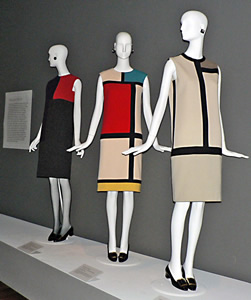 On a long-ago birthday, a friend gave me a washcloth embroidered with the monogram “YSL.” It was a nice washcloth, but I was puzzled: “Why did you give me a Young Socialist League washcloth?” I asked.

Today, nobody, not even someone like me whose taste in couture runs to jeans and sneakers, would fail to identify the initials as those of possibly the 20th century’s most influential fashion designer.

Yves Saint Laurent, who died earlier this year, has his closeup right now at San Francisco’s de Young Museum, in a show featuring 125 well-dressed mannequins as well as sketches and videos encompassing 40 years of the designer’s work.

Saint Laurent, born in Algeria in 1936, got his start early: by the time he was 17, he was working for Christian Dior in Paris; at 21, he was head designer at the House of Dior. A year later, in 1958, he introduced his “Trapeze” line, which flared out from the shoulders. The gray flannel Trapeze dress on show at the museum is one that any woman would look fashionable in today. At 25, Saint Laurent opened his own couture house.

Saint Laurent may not have introduced the mini (credit André Courrèges or Mary Quant for that), but he can take credit for numerous other innovations: The pantsuit. The safari jacket. The pea coat (okay, this wasn’t a new idea, but he made it chic). The women’s tuxedo (“le smoking”). The Mondrian dress.

Claudia Cardinale wore Saint Laurent’s clothes in The Pink Panther in 1964, Sophia Loren wore Saint Lauren in Arabesque in 1966, and Catherine Deneuve did in Belle de Jour in 1967. Her prim, white-collars-and-cuffs outfit is in the exhibition.

The show itself is divided thematically, not chronologically. Themes include “The Body Revealed” (lots of skin), “Geometry” (dots, lines, etc.), “Imaginary Voyages” (Saint Laurent never actually visited Africa, Asia, or the other parts of the world that influenced some of his designs), and themes such as painting, the theater, and literature.

The first thing you notice on entering the exhibit is how dark it is. The mannequins are illuminated, but the descriptive labels, placed at the bottom of each mannequin, are barely readable, even if you stoop down far enough to see them. By the end of my tour, both my back and my eyes felt strained.

But the clothes redeem it. The first case contains “The Body Revealed,” all black outfits, including a 1960 dress with a transparent top. Much more wearable is a 1965 evening gown with a bare midriff, which would look smashing on any (size 1) woman today. The black tuxedoes for women are stylish and daring, especially with nothing worn under the tux jacket.

Wilder and even more unconventional—though more dated—are Saint Laurent’s “ethnic” outfits, including a 1977 late-hippie red gypsy ensemble, and a collection of Africa-inspired dresses making use of raffia, as well as wooden and plastic beads and bangles. The models appeared barefoot. This was 1967. A sharply conical bra modeled on African sculptures (but that no human could wear) predates Madonna’s outfits of a later period.

Other “imaginary voyages” took Saint Laurent to Spain (a gold toreador costume), Morocco, and Russia (furs, boots, embroidery). Asian-inspired outfits as well as his perfume “Opium” were released in 1977. (Aside from the YSL washcloth, a bottle of “Opium” is probably the only YSL item I’ve ever owned.) Feathers and silk flowers trim some of the more exotic garments, and a section entitled “Flora and Fauna” features little ensembles bedecked in beaded flowers.

The most remarkable, as well as some of the most wearable, outfits date from the 1960s. A totally unadorned burgundy wool jersey jumpsuit from 1969 is elegant. The Mondrian dresses—mini-length sheaths with the artist’s geometric, primary-color designs—are classics. Less wearable are two 1969 dresses incorporating solid copper body casts: one midriff, one bodice (complete with breasts and nipples). You’d have to stand up very straight the whole time you were wearing them.

Some of Saint Laurent’s later outfits, while less classical than the tuxes and sheaths, are equally lovely. In 2002, the year the designer retired, he featured some pastel dresses, in particular a gauzy peach-colored gown, that stand out.

Far less successful are Saint Laurent’s tributes to artists other than Mondrian: Picasso, Van Gogh, and Matisse each received sartorial tributes. But their paintings don’t lend themselves to reproductions on fabric as well as Mondrian’s geometries do. A copy of part of a Braque painting, including two doves, forms the bodice of one gown. Saint Lauren’s literary tributes—to Cocteau, Apollinaire, Louis Aragon, and Shakespeare—are equally dubious. Printing words on fabric doesn’t really evoke a work of literature.

In the early part of the century, Mariano Fortuny’s pleated columnar gowns may have been the first to cling to a woman’s—uncorseted—body, and Paul Poiret as well as Coco Chanel contributed to the liberation of women from corsets. But Yves Saint Laurent helped liberate women from the stuffy fashions of mid-century. His pants suits, tuxes, and body-revealing garments permitted women to flaunt their femininity and/or experiment with their masculine side.

But if Saint Laurent glorified the female, he fell short in at least one aspect of it: the wedding gown. Wedding gowns are a traditional part and climax of a designer’s collection. If the three exhibited at the de Young are any example, Saint Laurent wasn’t out to make a woman’s wedding day the most glorious day of her life.

A 1999 “bridal gown,” apparently created entirely of silk flowers, is like a flower bikini with a train. Another, supposedly inspired by Shakespeare, is an elaborate Elizabethan-style gown in three shades of—brown!

But the most grotesque is from 1965. With its hood and its slits for the arms, it envelops the wearer in a full-length white cocoon hand-knitted from Aran wool. Must have been for a winter wedding. A scratchy one.