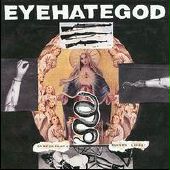 The New Orleans quintet Eyehategod is one of the most depressed, and depressing, bands in all of rock. Even in metal, where a bleak, Schopenhauer-esque worldview holds sway most of the time, no matter what, Eyehategod are regarded as the all-time kings of modern American lower-class squalor. Their worldview is not even the stylized angst of Metallica or Pantera; Eyehategod are ugly, insensate thugs, angry at themselves, their world, and the listener in equal measures. Live, vocalist Michael D. Williams often seems on the brink of pitching over onto the stage; his band &#145;mates&#146; regard him balefully, giving every indication that if he does fall, they&#146;ll just let him finish the set from where he lands. They don&#146;t care. They&#146;ve got their own problems.

Their music is a sludgy, distorted morass of Black Sabbath-derived guitar riffs and drumming that&#146;s just this side of chaos. Williams&#146;s vocals are just that, vocals. Sounds made with the human voice. They&#146;re completely indecipherable. The CD booklet is clotted with isolated phrases strung together, but even if one attempts to find a match for his howling in the text, it soon becomes obvious there&#146;s no connection between the two. The CD booklet to an Eyehategod album, in fact, is a work of art unto itself. A collage of religious icons, images of guns and torture clipped from old encyclopedias, and text excised from pharmacological reference books, the whole combined with Williams&#146;s insane scribblings – the overwhelming impression is of a world defined solely by degrees of pain. In the universe described by their music and &#145;art,&#146; their well-known drug problems are hardly surprising. Phrases like &#147;I can hold a candle it&#146;s the scissors they won&#146;t let me touch,&#148; &#147;mouthing the words to porno films and firing weapons into the shadows on the wall,&#148; &#147;why does the upholstery stink/welcome to the welfare state,&#148; and &#147;dirt poor and now mentally ill&#148; mix with song titles like &#147;Blood Money,&#148; &#147;Self Medication Blues,&#148; and &#147;Last Year (She Wanted A Doll House)&#148; to paint one of the most disturbing pictures in all of contemporary music.

This is not Eyehategod&#146;s best album; its predecessor, 1996&#146;s Dopesick, was an unqualified masterpiece, sounding as bad as it&#146;s possible for music to sound before it devolves utterly into noise. Confederacy Of Ruined Lives is more polished, sounding like a sequel to Take As Needed For Pain, the 1994 album which first brought their nihilistic vision above-ground. &#147;Cleaned-up,&#148; though, is relative. Eyehategod are still one of the filthiest, noisiest bands around; the ninety seconds of feedback which appears in the middle of &#147;.001%,&#148; seemingly for no other reason than to cause the listener pain, is surely proof of that. For this band of Southern malcontents, &#147;Yuck&#148; may well be the highest form of praise. This album could ruin your whole year.