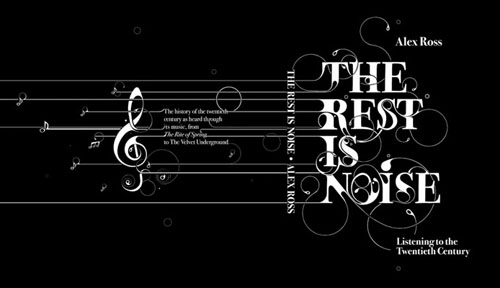 If you have been promising yourself that this year you will dig in to appreciate and understand contemporary classical music, start by investing in The Rest Is Noise: Listening to the Twentieth Century by Alex Ross. However, the carefully crafted writing is enough to satisfying anyone who just wants an engaging read. This reviewer refused to hurry through the 543 pages because she wanted to savor both the presentation of information and the language that Ross offered in this landscape of learning.

Ross is the estimable music critic for The New Yorker and the lively blogger behind therestisnoise.com, now nominated for the 2008 Bloggies award as the best blog about music. He has a clear passion for his subject matter and it is no surprise that The Rest Is Noise has made the 2007 ten best books list of The New York Times and many other book lists, including Time magazine and Amazon.com.

In The Rest Is Noise, immediately Ross made this reader want to hear each piece of music being discussed. For example in his discussion of Richard Strauss’s opera Salome just after the head of John the Baptist is presented to Salome and her step-father Herod is not only horrified but superstitiously frightened that something bad will happen, Ross writes, “An extraordinary sound emanates from the lower brass and winds: the opera’s introductory motif is telescoped—with one half-step alteration—into a single glowering chord. Above it, the flutes and clarinets launch into an obsessively elongated trill. Salome’s love themes rise up again. At the moment of the kiss, two ordinary chords are mashed together, creating a momentary eight-note dissonance.” Here’s a music critic building bridges from the work of art to new audience.

The way Ross maps composers and the time in which they worked has many dimensions in The Rest Is Noise. Take, for example, his survey of American composers working in the 1930s and ‘40s. Ross uses Virgil Thomson’s categorization of the types of composers working in that period. Thomson, who was a composer working as music critic, stated in a 1938 article that there were three types of audiences served by three types of composers: the luxury-trade (Ross interprets this audience being served by the traditionalist composer best represented by Samuel Barber), the professor-and-critic conspiracy (Ross names this composer as an elitist and is best represented by Roger Sessions), and the theater-public (Ross says this as the populist composer pointing to George Gershwin). However, Ross doesn’t stop the discussion there, but expands to a wider view drawing comparisons between the American classical music scene and “the main musical parties of the Weimar Republic.” Thus, German composers Hans Pfitzner, Arnold Schoenberg, and Hanns Eisler correlate in stylistic categories to American composers Barber, Sessions, and Gershwin. Kurt Weill, Ross explains, became a kind of lynchpin between the two groups when he left Germany as Hitler and the Nazis took over and eventually Weill migrated to the United States. As a populist composer of The Three Penny Opera (premiered 1928 in Germany), Weill also had a hit on Broadway in 1938 with Knickerbocker Holiday. Discussions like these, made this book reviewer want to dig in more to understand the period and its politics.

In many ways, Ross is extremely ambitious in his effort to record and de-mystify music within its historical context in the Twentieth Century. Not constraining himself to a linear timeline, Ross continuously braids the stories of key composers such as Britten, Copland, Schoenberg, Shostakovich and Stravinsky throughout his magnus opus. Predominately this is the story of music in the Western world although, as Ross relates, the late Twentieth Century experienced composers coming into Western music from Asia and Latin America. Ross also offers a passing glance at contemporary popular music created by such groups as Sonic Youth.

If one keeps in mind, as Ross points out, that “music about music had always been part of twentieth-century discourse,” it will be easier to accept how complicated the task was that Ross carved out for himself and how well he has developed this book. If there is one thing missing that would be a timeline of historical events (e.g. WWI, WWII, the Great Depression) mapped against significant accomplishments of the composers he writes about. A timeline like this would be years of work and many more pages. This reviewer heard Ross say in a public forum that he cut the book manuscript down from one thousand pages. People who are not musicologists can be thankful for the opportunity to finally sort out the accomplishments Schoenberg, Shostakovich and Stravinsky while delving into the alternate realities of John Cage, Philip Glass, and Steve Reich.