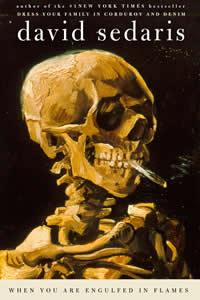 Armed with the latest “quit lit” and a cache of nicotine patches and lozenges, David Sedaris departs on an extended vacation to Tokyo with the intent of finally kicking his thirty-year-old smoking habit. The popular memoirist chronicles his efforts to leave behind a life’s worth of Kool Milds and Viceroys, at the same time living in an unfamiliar and perplexing country and struggling mightily to learn its language, in his uneven new collection of essays, When You Are Engulfed in Flames.

During his three-month, cigarette-free sojourn—he stopped smoking upon his arrival in Tokyo—Sedaris keeps a diary, with the entries describing his near-daily cravings and his impressions of life in Japan. While the diary form lends itself to the brief and humorous musings in that particular essay (“The Smoking Section”), whether on the unwavering support of his Japanese teachers, despite his abysmal test scores and utter inability to comprehend the language, or the poorly translated English seen throughout the city (a beauty parlor advertises its “Eye Rash Tint”), far too many of the remaining twenty-two essays in When You Are Engulfed similarly read like mere diary entries or notebook jottings: either their content amounts to no more than banal, everyday occurrences peppered with shreds of generic-sounding dialogue or they lack any emotional depth or introspection on the part of the author.

In fact, when reading When You Are Engulfed one can’t help but wonder how certain essays ever made it out of Sedaris’ notes into the book. Some are bland recreations of past encounters: a flight seated next to an obnoxious and foul-mouthed couple or a recollection of a particularly uncouth babysitter. Other essays begin with promise—in a medical examiner’s office amidst cut-open cadavers or in the backseat of a cab driven by a man with a self-proclaimed predilection for fornication—but lose momentum with each successive paragraph and fizzle out by the essay’s conclusion, eliciting only indifference in the reader. Very little in the book resembles Sedaris’ earlier stories—stories that, while fairly simple and formulaic in their design, almost always left readers roaring with laughter and marveling at the author’s dexterous comic mind. One can’t help but wonder, judging by the sheer pointlessness of a few of the book’s inclusions, if Sedaris ended up offloading old, previously unusable material to fill out this book’s pages.

In When You Are Engulfed’s more serious essays, what’s lacking at times is any sincere attempt by Sedaris to step back from the narrative and reflect upon what’s been written. In “Crybaby,” for instance, Sedaris finds himself sitting next to a man on a flight to Paris who’s crying over the recent death of his mother. Attempting not to laugh at the on-flight movie with Chris Rock in the presence of his sobbing neighbor, Sedaris gets to thinking about his father, how “nothing irritated my father quite like the sound of his children’s happiness,” and how, when the Sedaris kids laughed at their grandmother’s dinner table farts, his father would hit his kids over the head with a heavy serving spoon. “The thought of my sisters and me, so young then, and so untroubled,” Sedaris writes, “was sobering, and within a minute, Chris Rock or no Chris Rock, I was the one crying on the night flight to Paris.” But why would such a memory so suddenly bring him to tears? Never has Sedaris suggested that his siblings are that troubled and bad off now, which leaves the reader to question if there’s more to his family story than he lets on in his stories. Sadly, he explains no further.

To say that When You Are Engulfed in its entirety is disappointing, however, wouldn’t be true. And herein lies the frustrating aspect of the book: though many essays in When You Are Engulfed are underdeveloped and, frankly, half-assed, there are a couple gems hidden amongst the book’s noise, each one teasing the reader with a small taste of how well Sedaris can write and how much better this collection could’ve been. For instance, Sedaris writes about his unusual friendship with a local villager in Normandy whom he calls Jackie (“The Man in the Hut”) who, after going to prison for sexually molesting his wife’s grandchildren, is, not surprisingly, shunned by the townspeople upon his release and return to the village. “He would be treated as if he were invisible,” Sedaris writes, “and, with luck, the isolation would drive him away.” Unlike his neighbors, however, Sedaris maintains his friendship with Jackie though he knows his neighbors think less of him for doing so. And although Sedaris visits the man in his small hut less and less as the years pass, it’s still only the author who stays in contact with Jackie before his death from cancer.

What makes “The Man in the Hut” so intriguing and endearing and, in many ways, unlike much of his other work, is that Sedaris delicately crafts the story so as to make the reader feel sympathetic for Jackie, despite the unconscionable crime he committed. Any fiction or non-fiction writer understands the difficulty involved in casting an otherwise loathsome character in a favorable light; here, Sedaris accomplishes just that with an ease unseen in any of his previous books.

When You Are Engulfed also sees Sedaris broaden his literary repertoire with a sharply satirical essay (“What I Learned”) about his college years which, if in want of a clue as to what type of satire, first appeared in the “Shouts and Murmurs” section of The New Yorker. Any reader of the Sedaris canon might think he or she was well-versed in the author’s collegiate years—namely, his drug use, failings as a budding performance artist, and pathetic attempt to lead a writing workshop.

In “What I Learned,” however, Sedaris refigures himself as a student at Princeton University (he did not, in fact, attend Princeton) when wagons were a family’s most advanced means of transportation and the school’s mascot was a “saber-tooth.” His father’s wagon, Sedaris tells the reader, was “completely covered with decals and bumper stickers: ‘I Hold My Horses for Ivy League Schools,’ ‘My Son Was Accepted at the Best University in the United States, and All I Got Was a Bill for $168,000.’ On and on, which was just so…wrong.”

Sedaris explains that he first intends to major in “patricide”—“The Princeton program was very strong back then, the best in the country, but it wasn’t the sort of thing your father could get too worked up about”—but, much to the dismay of his parents, he soon switches to a more palatable field of study: comparative literature. From there, he decides to become a writer, and eventually publishes a book of stories, all of which center on his eccentric family. The book is met with praise from most everyone—everyone, of course, except his parents:

Other people had loved my writing, but these two didn’t get it at all. “What’s wrong?” I asked.

My father adjusted his makeshift turban and sketched a mustache on my mother’s upper lip. “What’s wrong?” he said. “I’ll tell you what’s wrong: you’re killing us.”

“But I thought that’s what you wanted?”

With When You Are Engulfed, it’s obvious that what Sedaris wants is to prove that he’s no one-trick pony. His earlier works—most notably, Barrel Fever (1995), Naked (1998), and Me Talk Pretty One Day (2000)—demonstrated his mastery of the literary one-liner and cemented his position as one of America’s funniest writers. In Dress Your Family in Corduroy and Denim (2004), which preceded When You Are Engulfed,Sedaris addressed increasingly complex themes in his essays, with his writing occasionally taking on a more reflective nature; Michiko Kakutani of The New York Times, in her review of Dress Your Family, wrote of “a new strain of introspection that makes for a book with more emotional resonance.”

Sedaris’ new book represents an even greater attempt to capture the more emotionally complex or ambiguous aspects of his life. And, with a handful of the inclusions in When You Are Engulfed, he succeeds. Yet too much of the writing in this hit-or-miss collection skims over certain meaningful themes that reappear—the need for companionship, the loss of childhood innocence, the reality of same-sex relationships—in favor of casual observation or ill-timed humor.

It’s clear that Sedaris has the ability to craft stories that are absorbing and engaging and that will complement the hilarious misadventures and witty commentaries that have endeared him to so many readers. But, if he hopes to compile a more complete, more consistent collection the next go-round, he’ll need to leave the flat, emotionless sketches of daily life that plagued this book in the pages of his diary.