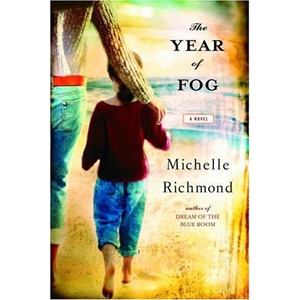 We all walk through life knowing it can change in an instant. A car can come barreling around the corner and hit you. A doctor can call with devastating news. The shake of an earthquake can bring down the walls.

Most of the time, we try and push away the sense of our mortality and focus on life’s pleasures: love, food, sex, and joy.

For Abby Mason, a photographer and the central narrator in Michelle Richmond’s book, The Year of Fog, the life-changing moment comes during a walk on San Francisco’s Ocean Beach. Fog lies densely along the water, making it difficult to see more than a few feet ahead. Abby is walking with her fiancé’s six-year old daughter, Emma, who is scouring the sand for a perfect sand dollar.

Without thinking much about it, Abby lets go of Emma’s hand and watches her skip ahead into the fog. Then Abby’s attention is drawn to the carcass of a baby seal half-buried in the sand. She pauses to snap a photo. She looks up, sees a funeral procession pass by, and ponders the meaning of life. By the time Abby refocuses her attention, a minute has passed and Emma is gone.

Richmond’s mesmerizing book, which has just been released in paperback, focuses on how small mistakes have long-lasting implications. Abby looks away; a child disappears; many lives fall apart.

How do we react when something precious is taken from us? Abby and her fiancé Jake Balfour stumble through their pain to look for the missing girl. While The Year of Fog is structured around the search for Emma, it offers a deeper meditation on the fragility of love. Which is the stronger loyalty, to child or lover? How can we relieve someone else’s despair? These sometimes unanswerable questions form the heart of Richmond’s book.

Abby and Jake react differently to Emma’s disappearance, and their contrasting views drive a wedge in their relationship. As soon as Abby realizes Emma is gone, she runs up and down the beach looking for, dashes into a nearby restaurant, and scours the parking lot to look for suspicious characters. When she can’t find the six-year old, she has to make what surely is the hardest phone call of her life: to Jake, who is visiting a friend in Humboldt County, to tell him Emma has disappeared.

Once the police become involved, the search expands and soon the reader is engrossed in the all-too-familiar rituals associated with child kidnapping. Friends and family set up a command center in San Francisco’s Castro District and raise more than $300,000 in reward money. Volunteers distribute thousands of flyers with Emma’s picture. Jake appears on more than 100 radio and TV shows pleading for the kidnapper to return his child unharmed. Tips and alleged sightings come into a hot line from around the country.

As time passes and Emma is not found, the police pull back on their search, leaving behind a fragmented and frightened family that cannot move on with their lives or return to what they once knew. Then one day someone walking on Baker Beach, three miles away from Ocean Beach, discovers a child’s shoe, which turns out to be Emma’s. Jake starts to believe that his daughter has drowned and he is comforted by the notion that at least she is not suffering at the hands of a kidnapper. He insists on holding a funeral that lowers an empty coffin into the ground.

Abby refuses to stop believing that Emma is out there, somewhere, alive. She thinks if only she could better remember the moment before the kidnapping she would discover the secret to Emma’s disappearance. So while Jake tries to move on with his life, Abby visits a hypnotist to uncover hidden memories, and that visit launches the search in an entirely new direction. Only this time, Abby is searching alone. Jake no longer believes his daughter is missing.

Reading about a missing child is never easy, but Richmond throws in enough diversions that the book is not one long immersion in despair. She makes The Year of Fog a Valentine to San Francisco and the book is peppered with descriptions of some of the city’s best known landmarks, like Sutro Baths and Golden Gate Park, as well as its hidden gems, like Reverie Café in Cole Valley. These vivid glimpses of the city, as well as some of the peripheral characters in the book, are a welcome antidote to the wreckage brought on by Emma’s disappearance.

The mystery of Emma’s disappearance does get solved, in a plausible but highly unlikely way. Richmond drops hints of the resolution throughout the book but they are so well-disguised that most readers won’t see them until the denouement. So The Year of Fog works well as both a literary mystery and a poignant portrait of a family ripped apart by random circumstance.