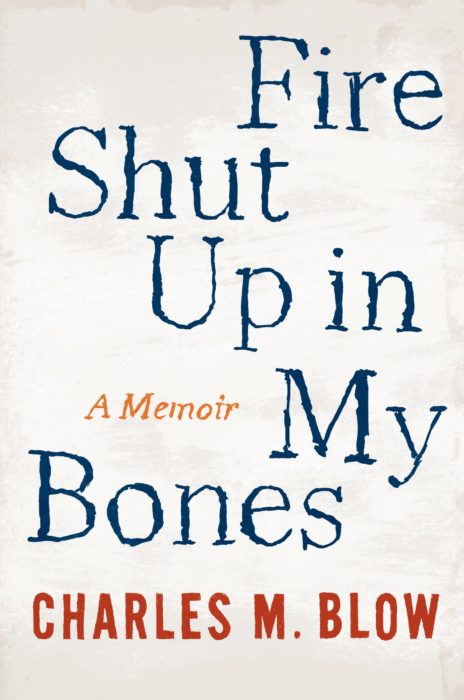 In his New York Times op-eds, Charles Blow sometimes single-mindedly elevates discourse of volatile topics to sane discussion. He punctures long held cultural narratives about race, religion, politics, poverty, class, gender, sexuality. Now, in his first book “Fire Shut Up in My Bones | A Memoir” Blow writes about his life growing up in rural Louisiana, his troubled childhood and career drive that landed him as a top commentator in print and in broadcast news.

Blow, a divorced father of three, recently came out as bisexual and has become an advocate for awareness and acceptance. He writes with equal fire on GLBTQ issues and continues to be an advocate of gay rights, and in his memoir he examines the difficulties he had coming to terms with his sexual identity, which will help a lot of young people in the throes of self-acceptance. He includes a heart-breaking account of his solitary struggles trying to work through the confusion he felt after an older male cousin sexually assaulted him when he was 7 years old.

Blow was a gifted high school student and also a popular athlete; still, he remained insecure socially, even though he was popular and had many girlfriends, and he went through tortured rationales to repress his attraction to males. He was also buying into peer pressure and pronounced negative messages from his family, community and church about homosexuality. He suffered suppressed outrage at being sexually assaulted and later avoiding advances from another previously trusted member of his family.

Meanwhile, Blow was very close to his single mother and the book is a tribute to her strength, determination and love. After his parents’ turbulent marriage collapsed, his mother raised four children, held jobs while earning a degree and became a high school teacher. Blow paints a picture of tight community, church and family, but also an unblinking look at the sometimes crushing peer pressure, church hypocrisies and unbalanced patriarchy of his environment. And of pervasive racism in the 1970s of a still very segregated Louisiana.

The relatives, friends and neighbors in Charles’ early life provide for a creatively ripe backdrop for a budding writer, but as vivid as Blow can be with imagery and character stories (in the gothic Southern writer tradition) he can also float too many narratives at once, which may be connected threads but read as meandering.

Blow’s chapters on college life lead to a scathing j’accuse of fraternity culture, particularly dangerous hazing rituals. Details about his own experience pledging a fraternity is truly disturbing. Blow walked away from it after he became a pledge officer. He put all of his energy in his graphic art/journalism career and became an intern at the New York Times as a graphic journalist, quickly moving to op-ed graphic journalism, a field that Blow himself established at the Times.

As passionately written as “Fire Shut Up in My Bones” is, on balance, Blow basically skims the beginnings of his journalistic career, and it makes you look forward to a second volume that might peak into the world of writing influential commentary for the NYT or how to match wits with the witless on cable TV, not to mention his obviously well-considered socio-political philosophies.