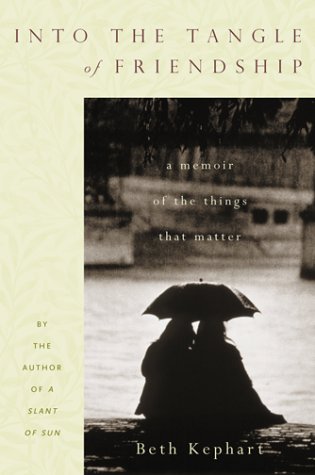 Beth Kephart has chosen an elusive theme for Into the Tangle of Friendship. "The more we let others into our lives," she writes, "the safer we become and also the more endangered." Her prose style, like the subject of her memoir, is a risky alliance of counterpoised harmonies, a tripartite melding of poet, essayist, and storyteller. The narrative unfolds through an accumulation of graceful meditations and vignettes. Time frames are shuffled and then examined for underlying metaphoric patterns. High school memories are recalled, as well as literary struggles, her marriage to a Salvadoran architect and artist, her unusual and sometimes prickly relationships with neighbors and coworkers, and her challenges as a parent. The recounting is more impressionistic than the author&#146;s highly praised 1998 memoir, A Slant of Sun, a finalist for the National Book Award. The earlier book chronicled her son Jeremy&#146;s pervasive developmental disorder (PDD), which was diagnosed at age two and sent Kephart&#146;s life into an agonizing tailspin.

Jeremy was a miraculously normalized seven-year-old in the final pages of A Slant of Sun. In the new book, he&#146;s nine years old and Kephart makes no overt mention of any lingering developmental difficulties (which may confound some admirers of the previous work who are looking for a diagnostic update). Her concerns for her son are now blessedly universal in scope:

How do parents help their children get ready for friends who are not, in some manner, just like themselves?… I don&#146;t know all the answers; no one does. But for now I use stories when I can find them. Stories from life, stories from books, stories that matter. I ask Jeremy himself to fashion stories about unexpected friendships. I encourage the communion of unlikely souls…

Storytelling is perceived as a redemptive force throughout Into the Tangle of Friendship. There are stories within stories, sometimes comprised of accounts from friends and family. Her husband Bill tells a riotous tale of the dress-up games played by his grandmother and her female companions in El Salvador; Jeremy and his best buddy James weave a fanciful ghost story about the pilot light flickering inside the basement furnace; Kephart&#146;s friend Andree writes of her husband&#146;s final days in the cancer ward of a Korean hospital. Like a Scheherazade of the suburbs, Beth Kephart tells stories to save her life — and all of our lives — by bestowing a fragile nobility upon human connectedness. One doesn&#146;t have to read too far between the lines to surmise that her reverence for language and social interaction stems in part from having witnessed her son&#146;s retreat into a near-autistic silence and withdrawal from the world.

Into the Tangle of Friendship stands on its own, but it achieves a deeper resonance when seen as a response to some of the issues raised in A Slant of Sun. Kephart was hard on herself in the earlier book, both as a writer and as a parent. Prior to the diagnosis of PDD, she wondered if Jeremy&#146;s "deviations" from the norm weren&#146;t in some fashion the result of being "the offspring of artists." She felt shame when confessing that she and her husband were "not really people people, if you know what I mean." A Slant of Sun never fully resolved this ambivalence toward the solitude of artistic creation and its seeming denial of fellowship. By focusing on storytelling as a foundation for intimacy, Into the Tangle of Friendship succeeds in reconciling the paradox between solipsism and community. It&#146;s clear that stories assist Jeremy in engaging with other people and with his environment. Moreover, we come to recognize that Kephart&#146;s literary life flourishes in a shared culture of friends and readers.

Seen in this light, her latest book is a revealing portrait of a writer&#146;s emerging faith in the grandeur of her profession. She invokes the work of authors — Elias Canetti, William Maxwell, M.F.K. Fisher, Capote and Hemingway — whom she admires for their craft and the themes addressed in their work. When she talks about the courtship of her future husband Bill, the rituals don&#146;t revolve around dinner dates and moviegoing, but rather pursuing their artistic passions — her writing and his painting — late at night together in his apartment. "We gave each other silence," she tells us. "Hours would go by, and there we would be, taking our light from separate splinters of the moon, I with a pen, he with a paintbrush, the sounds of the city through the window." Charting her development as a writer, Kephart describes a six-year period during which she and her next door neighbor Andree forged a two-party literary salon via their front porch mailboxes. Poems and stories and critiques crisscrossed their lawns on a regular basis:

Back and forth, back and forth, the ground rules somehow establishing themselves, the notes couriered, always, in the dark, down the sidewalk, up the steps, across the porch floorboards, on very quiet shoes… This is what I needed more than my sleep, which I began, in increments, to sacrifice…

The dance of "back and forth" is an apt metaphor for the comingling of the mind&#146;s creative energy and the world&#146;s validating embrace. Kephart&#146;s "tangle" in the title of her book ultimately suggests both the intertwining of camaraderie and the threaded lifeline of literary striving that extends outward from her authorial vision. "If you think friendship is an organ of convenience," she warns us, "think again: it takes its toll." The toll, in this instance, is the burnished purity of her rich and satisfying memoir.