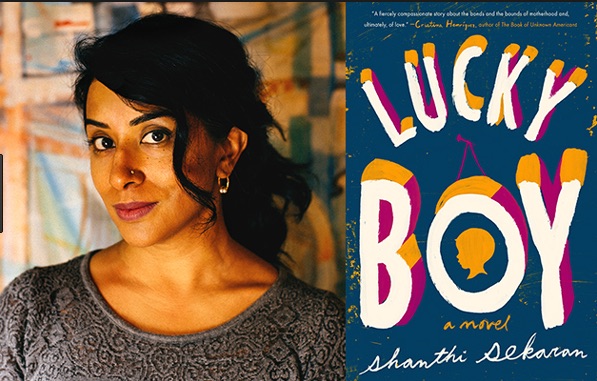 “Lucky Boy,” by Berkeley-based writer Shanthi Sekaran, is two stories in one. Either of which, rich in prose and character development, would be worthy of being its own novel, but how much more satisfying with the merging of divergent accounts. At its core is a story of motherhood – that of an immigrant from Mexico, as well as a first generation Indian American – and their love for the same child.

Solimar Castro Valdez (Soli) is young and eager to leave her provincial small town roots in Mexico, hence beginning a long and dangerous trek across the border. Although her father is initially reticent to let his naive daughter be escorted by a smooth talking “salesman” of sorts to the land of opportunity, he finally gives into his daughter’s persistence, believing the escort’s assurances for her safety. Through a series of unfortunate events, she eventually lands at her cousin’s doorstep in Berkeley – battered, barefoot and, unbeknownst to her, pregnant.

As she struggles to build a new life in a new world, it does not take Soli long to realize that amid cruel, challenging and uncertain circumstances, the unconditional love of her baby boy would make it all worthwhile. Soon though, even that would be taken from her.

That evening, Soli left the Cassidy home on feeble ankles. She didn’t know whether to feel scared or stupid. Stupid for thinking she could dream and live with no one noticing. And scared to think she might get caught. That the simple functional life that she’d been blessed with might be yanked away. Already, she wondered how she’d give birth in jail.

Just down the street from where Soli works, Kavya Reddy lives a seemingly charmed life. She is a first generation American born to Indian parents. To their approval, she has excelled at school and marrying her college sweetheart, Rishi, who shares a similar background. While her husband maintains an estimable position in the tech industry of Silicon Valley, Kavya disappoints her parents by pursuing less lofty professional goals in becoming a chef for a college sorority house.

Despite their disapproval, Kavya is mostly content … until she’s not. Hitting mid-thirties, her biological clock is deafening, and her inability to conceive becomes her obsession. This is where Soli and Kavya’s worlds collide: through no fault of her own, Soli loses a legal battle for her son, giving way to Kavya finding the child she so desperately yearned for.

Why did people love children who were born to other people? For the same reason they lived in Berkeley, knowing the Big One was coming: because it was a beautiful place to be, and because there was no way to fathom the length or quality of life left to anyone.

Imbued with emotion and authenticity, Sekaran gives a voice to two mothers as well as to the triumphs and travails of immigration and assimilation. And she does so without making judgements or taking sides. “Lucky Boy” is detailed and intoxicating. For whatever seemingly contrived circumstances and/or what some perceive as cliche characters, the journey that is Lucky Boy, is completely engaging and unexpected. I consider myself lucky to have stumbled upon this gem of a novel, and I think so too will you.