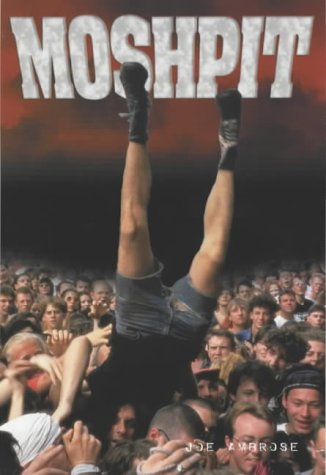 I’ve a confession to make to you, dear readers: I spent a good deal of my youth running around in circles, bumping into fellow frustrated, disenfranchised boys while other angry young men (and women) vented their vitriol at the world on stage. Throughout my teens and most of my twenties, I frequented many a moshpit, that whirling no man’s land of flying bodies and testosterone run amuck that has become a boon for music lovers craving a physically syncopated high and a bane for parents and concert promoters.

Once I caught a wayward elbow around the face and was rewarded with a black eye, a trophy that immediately gained me the respect and admiration of my surrounding “moshers.” I wore the wound like a badge of pride for the following week; the implications of why I felt such pride regarding the blemish, and how a sense of community could exist within such a violent atmosphere, has caused more than its share of raised eyebrows (mine included). “Why does such a potentially dangerous activity seem so attractive to you?,” I was continually asked, and found myself mumbling words like “catharsis” and “release” to no discernible effect. The need for participating in such an outburst is incredibly difficult to articulate; the only “explanation” I’ve ever heard that comes close to nailing it is that “If I could (explain why), I probably wouldn’t be doing it in the first place”.

The quote appears in The Violent World of Mosh Pit Culture, and it’s one of the few nuggets of wisdom that manages to wrench itself loose from the petrified amber of bad prose and stunted insight that marks a failed attempt to view the “pit” through a sociological lens. I bring up my own story only to emphasize that I understand any attempt to dissect the phenomenon of the pit is akin to capturing lightning in a bottle, and my hat goes off to anyone who would try to do so. But with its rejected-Oprah-episode-title and the focus of an ADD-afflicted tot, the book seems destined to run circles around itself searching for something, anything, to say.

The problem lies squarely with the book’s author, Joe Ambrose, a self-proclaimed veteran of many punk rock and metal crowd frenzies who speaks in the colloquial style of an English pub-dweller. While this adds to the book’s voice-of-the-crowd authenticity, his inability to structure information leads the reader down nothing but continual dead-ends. What could be considered major turning points in the history of the mosh pit — how primal punk dancing evolved into slam-dancing pits, the coining of the term “mosh,” the admittance into the mainstream zeitgeist and the eventual fostering of pit-fueled meathead posing that indirectly led to debacles like Woodstock ’99–are touched upon, but never delved into per se and seem to appear haphazardly.

Chapters appear arbitrarily designated, throwing logic or chronology out the window: Woodstock ’99, a relatively recent event, appears in Chapter 2, whereas a “history” of moshing makes up Chapter 3 and a suggestion about why people feel compelled to engage in moshing shows up in Chapter 24. The Roskilde concert which recently led to several Pearl Jam fans being crushed during the band’s set is given a full chapter, despite being an oversold venue issue that had little to do with the pit. Why is it being mentioned here? To deliver on the sensationalistic aspect promised by the title? Only the tome’s editor may know for sure.

In between the brief incidental news items and historical bric-a-brac, readers are treated to first-person concert reviews, travelogue-style anecdotes of moshing in other countries, and the occasional interview of mosh-pit denizens, which run the gamut from incomprehensible to simply self-indulgent. A section devoted to the commercialization of the punk and metal culture does little but slag a few bands and sing the praises of others, not unlike a who’s hot/who’s not list (Linkin Park=bad, Sepultura=good…Thanks for clearing that up, Joe). And passages such as the climactic summary, which reads
“…Why is moshing so attractive? For just one moment, after one last gulp of oxygen, when you walk out into the moshpit, you’re the master of the universe. That is why moshing is so attractive.”

not only seem better suited to an 8th grade level How-I-Spent-My-Summer-Vacation essay, but betray a stunning lack of writing finesse and style. And this book is supposed to be publishable?

Those interested in reading an expose of the pit culture’s more sordid aspects, a sociological treatise on the primal community behind the violent front or even something to pass the time on a boring transatlantic airline flight will find little in Mosh Pit Culture to sustain their interest. For being a card-carrying member of a cultural subset, Ambrose seems to have precious few insights on the social atmosphere, musical expressions or the drive that fuels these frenzied rituals in the first place. A list of likes, dislikes and obnoxious first-person stories on how great a pit is may be perfect fodder for an online diary, but it hardly constitutes a profound, or even readable, take on what is a unique experience. Some advice, Mr. Ambrose: Keep up the pit policing and supporting your favorite bands. But you may want to consider giving up a career as a professional writer.

(21825)
$3.99 (as of January 21, 2021 - More infoProduct prices and availability are accurate as of the date/time indicated and are subject to change. Any price and availability information displayed on [relevant Amazon Site(s), as applicable] at the time of purchase will apply to the purchase of this product.)
related posts