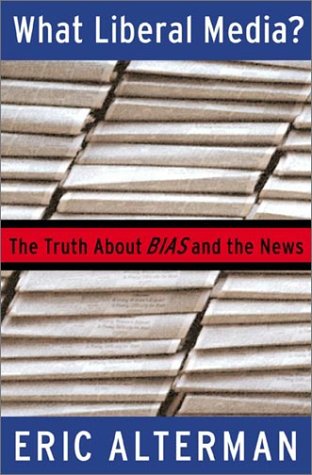 What Liberal Media?: The Truth About Bias And The News

Are the media biased? Well, it depends on how you look at it. Fox News Channel, for example, is a right-wing propaganda outlet, but everyone knows that, and no one goes there expecting objectivity. In What Liberal Media?, Nation and MSNBC.com columnist Eric Alterman argues that all the yelling conservatives have done, since the 1960s, about the “liberal media,” has been the equivalent of “working the refs.” As a consequence, major news outlets and commentators have shifted mainstream political debate inexorably to the right. At this point, truly liberal voices are almost entirely absent from public discussion of major issues. At the same time, though, the wails about “liberal bias” in the media persist in best-selling books by Bernard Goldberg, Bill O’Reilly and Ann Coulter.

In Fear and Loathing On The Campaign Trail ‘72, Hunter S. Thompson quoted a Republican convention delegate saying, “This country’s going to move so far to the right you won’t even recognize it.” That statement, which started out as (likely drunken) hyperbole, has become a disturbing truth. What passes for radical left-wing opinion in America today would fit comfortably into the platform of any center-right party in Europe.

There’s an unexamined assumption here—that liberal internet commentators and talk-radio hosts would be more likely to broadcast “truth” than conservatives have been—but beyond that, the reader is left wondering whether the battle hasn’t already been lost.

While it’s demonstrably true that left-wing voices are primarily absent from mainstream political debate, a book like this isn’t necessarily a solution. Alterman describes a shift in tone, from civilized discussion to cable-TV loudmouths hurling sound bites and baseless accusations at each other, but in general he refuses to move with the tide and employ these tactics himself. What Liberal Media? is an organized, rational and persuasive book which refuses to demonize those who disagree. For this reason, it’s somewhat unlikely to reach readers whose minds actually need changing about the issue of media bias. This seems to be a problem endemic to the moderate left. The insistence on appealing to the better angels of people’s natures appears increasingly starry-eyed and naïve in an age where the other side is sending out commentators like Ann Coulter and Rush Limbaugh, who often seem to find the idea of backing up their frothing assertions with facts laughable. Perhaps if Alterman was a little more willing to get blood on his hands, this book would have a chance of taking bestseller-list space away from idea-free ideologues of the right like Bill O’Reilly and Sean Hannity. As it is, it’s likely to reach the already converted, and a few others, a fact which, given the importance of its ideas, is somewhat disheartening.

(6632)
$2.06 (as of January 25, 2021 - More infoProduct prices and availability are accurate as of the date/time indicated and are subject to change. Any price and availability information displayed on [relevant Amazon Site(s), as applicable] at the time of purchase will apply to the purchase of this product.)