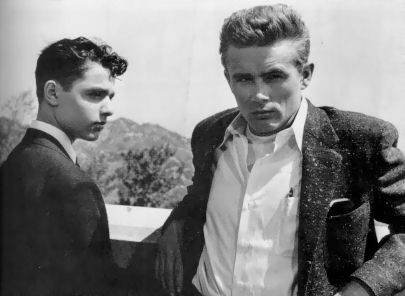 Sal Mineo (left) with James Dean in “Rebel Without a Cause”

Sal Mineo was one of the most promising new stars of the 1950s, but his fame floundered, even as his talent grew. Still, his reputation as an actor has withstood his up-and-down career. Michael Gregg Michaud’s erratic bio of Mineo covers all of the bases.

Mineo grew up in the Bronx and was just one of the neighborhood toughs. His mother took him to dance class, and his good looks, drive and willingness to learn may have gotten him bullied by the gang, but he also was noticed as a performer. He was first cast on Broadway in a juvenile role in Tennessee Williams‘ drama “The Rose Tattoo,” and he followed that with a feature role in “The King and I,” starring Yul Brynner, who took Mineo under his wing, teaching him about an actor’s craft.

Nevertheles, Mineo’s mother was managing his career out of their home and making his business decisions. By the time he co-starred in “Rebel Without a Cause,” as Plato, the outcast, he was on the verge of building a major acting career. His Oscar nomination for “Rebel” led to more film and TV roles that typecast him as a street-tough but sensitive youth. Along with his “Rebel” co-star James Dean, Mineo became a symbol of teen rebelliousness and angst.

Other laudable parts followed in big Hollywood productions like “Giant,” “Somebody Up There Likes Me” (co-starring Paul Newman) and gritty low-budget ’50s dramas like “Dino” and “Crime in the Streets” (with John Cassavettes), but Hollywood didn’t really know what to do with Mineo. At this point, his mother was mismanaging his career and money. Further compromising Mineo’s prospects as an actor of note was his budding pop singing career. He had the look, if not the voice, of a teen pop star. His fame grew, but at a price. Mineo finally made the difficult transition from teen idol to adult star in such films as “The Gene Krupa Story” and “Exodus,” but by then his career had started its downturn.

Mineo supported his family for much of his life and was very generous with friends. Later, it was he who needed support, as he barely hung on with low-paying, undistinguished film, TV and stage roles. Eventually, he was living out of a suitcase and playing the dinner-theater circuit. He produced and directed infamous productions of “Fortune and Men’s Eyes” on both coasts that were hits, but he was persona non gratis in Hollywood—owing to the fact that he refused to live a closeted life.

Michaud does a good job dissecting Mineo’s active personal life with focus on his two great loves, Jill Haworth, his Exodus co-star, and stage actor Courtney Burr. The author relies heavily on transcriptions of interviews with family, friends and lovers, often rehashing events. The Broadway and Hollywood stories are fascinating in detail, but Michaud leaves huge gaps in major areas—for instance, in his estrangement from his family, which is just glanced over.

Still, there is an earnest attempt here, even as the crafting of the storytelling becomes loose and eventually, seemingly every detail of Mineo’s personal and professional life is thrown in as the author hammers out the narrative, somehow making this tragic star a crashing bore. A good, for-the-record account that clears up all of the rumors about Mineo’s murder rescues the book in the end. The biography is bursting with a great photo spread of Mineo, with many beefcake shots a la screen magazines of the ’50s.