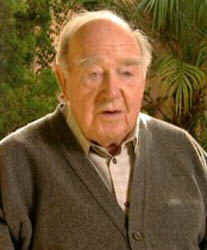 Straight from the Horse&#146;s Mouth comes from the mouth of British movie director Ronald Neame, filtered through the pen of ghostwriter Barbara Roisman Cooper, who &#147;specializes in creating celebrity profiles for various publications, including British Heritage, Biblio Magazine, and Modern Maturity.&#148;The title is a reference to the movie of Joyce Cary&#146;s The Horse&#146;s Mouth, starring Alec Guinness, that Neame directed in 1958. The movie does not seem to have been any more important in Neame&#146;s career than any other, but presumably his publishers wanted a catchy title and a justification for running a photograph of Neame and Guinness on the cover.

In any event, the stretch was unnecessary: Neame&#146;s story holds the attention on its own merits, in spite of the as-told-to flatness of the text. Neame is not among the handful of first-rank directors whose names on the marquee are enough to pull in the fans, but he has one quality that makes his story fascinating: the man is over 90 years old. His amiable ramble through his career serves as an invaluable history of British cinema from the 1920s through the 1960s, followed by a much less interesting once-over-lightly of his Hollywood experiences thereafter.

&#147;Ronnie&#148; Neame got into the film biz so early that he served as a teenaged assistant cameraman on Alfred Hitchcock&#146;s first talkie, Blackmail. Conceived as a silent film, Blackmail was converted into a talkie at the last moment, its producers determined to make the first talkie in England and beat Hollywood at its own game. Neame&#146;s account of the problems caused by noisy cameras, humming arc lights and a Czechoslovakian leading lady with a heavy accent provide a fascinating chapter in the history of film-making&#151;and an invaluable bit of movie lore for any true movie lover.

Neame himself comes across as a well-balanced and professional craftsman&#151;organized, hard-working, diplomatic&#151;not at all in the tradition of enfants terribles like Hitchcock. Working his way up the ladder&#151;cameraman, assistant cinematographer, director of photography&#151;he honed his skills on the &#147;quota quickies&#148; produced by the British film industry in the 1930s in response to an Act of Parliament mandating that 20 percent of films shown on British screens be made by British companies employing British talent.

Along the way, he worked at most of the British studios whose names we remember today&#151;Elstree, Shepperton, Pinewood, Ealing&#151;and was one of the founders of the British Film Academy, the Association of Cine Technicians, and the British Society of Cinematographers. Neame&#146;s assorted talents are impressive. Not only did he receive Academy Award nominations for the screenplays of Brief Encounter and Great Expectations, he also received one for the special effects in Blithe Spirit.

In 1939, he worked on a film version of Major Barbara with an up-and-coming young film director named David Lean, an association that would reach its peak with the classic 1946 production of Great Expectations, Lean directing, Neame serving as producer, with Lean and Neame jointly writing the script. This was Neame&#146;s first association with Alec Guinness, later to star as Gully Jimpson in The Horse&#146;s Mouth.

After the war, Neame moved into the director&#146;s chair, directing a total of 25 films on both sides of the Atlantic, including The Man Who Never Was, The Horse&#146;s Mouth (script by Guinness), Tunes of Glory, starring Guinness and John Mills&#151;the film of which Neame is proudest&#151;I Could Go On Singing with Judy Garland, The Chalk Garden, The Prime of Miss Jean Brodie, a musical Scrooge starring Albert Finney, and his most successful Hollywood potboiler, The Poseidon Adventure.

In 1980, Neame went to Germany to direct Walter Matthau and Shirley McLaine in Hopscotch, leading to the funniest show business anecdote in the book. Matthau and his wife took time off to visit Dachau, returning &#147;deeply shaken&#148; according to Neame:

Typical of Walter, he turned his grief into a lighter anecdote, explaining that he and his wife Carol had been fighting before their visit to the concentration camp. Once they had completed the tour, she had taken Walter’s hand and said, "Let’s not quarrel anymore, it’s so senseless." But Walter replied, &#145;It’s too late for apologies Carol, you’ve completely ruined Dachau for me.&#146;&#148;

Neame is now officially retired&#151;he directed his last film in 1990&#151;but the honors keep pouring in. The Queen of England named him a Commander of the Order of the British Empire. He was Man of the Year of the British American Chamber of Commerce. And n 1991 he was honored by BAFTA in a tribute the name of which seems singularly appropriate to this thoroughgoing professional: &#147;Salute to Craftsmanship&#151;Ronald Neame.&#148;