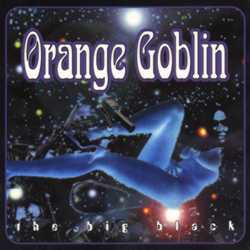 First things first: this album’s title, The Big Black, has absolutely nothing to do with Steve Albini’s noise- and rage-fueled mid-80s pummeling device. No covers of "Jordan, Minnesota" here, sorry. Orange Goblin is a stoner metal band, with no pretensions towards anything deeper than rocking out, and every once in a while slowing it down for a spacey ballad a la Funkadelic’s "Maggot Brain."

Stoner metal’s Year One is 1969. That year, the first Black Sabbath album was released, and the world was forever changed. Gearheads and beer-swilling, bong-hitting, no-future kids across the world found the music that spoke to them on their own terms, and what it said was: the hell with it. Let’s go get messed up and make a huge goddamned racket for awhile. And they did.

In the last ten years, bands mining the Sabbath sound (and the sound of the ur-stoner band, Palm Desert, California’s Kyuss) have been making piles of records, and frankly it’s a little amazing how far three chords and maybe half a dozen guitar effects pedals will take you. Just as in the early 1990s it was possible to immediately pigeonhole a band as being "alternative" based merely on their having a one-word name (Sugar, Spoon, Halcion), it is now possible to identify a stoner metal band by name alone. Orange Goblin. High On Fire. Electric Wizard. Nebula. Red Giant. Atomic Bitchwax. Acid King.

Orange Goblin catapult themselves ahead of the pack by adding forward momentum to the basic stoner formula. They have taken the basic Sabbath sound and added much more speed than their contemporaries. Indeed, they approach Motorhead velocity at times. In addition, where many bands grab onto a riff and stick with it, creating the rock equivalent of a huge truck tire spinning in thick, soupy mud, the OGs actually get somewhere with their riffs and (almost heretical, this) melodies. Songs like "Scorpionica" and "Quincy The Pigboy" are actually songs, rather than merely exercises in throb and crash. Particularly impressive is the practically prog-rock instrumental "You’ll Never Get To The Moon In That," which provides an excellent showcase for guitarists Joe Hoare and Pete O’Malley, both of whom are surprisingly tasteful given their chosen rock genre.

Stoner metal, like all metal, has no pretensions. It has no ironic stance. It is, despite the admittedly heroic substance intake of its players, a relatively pure form of rock music. If you’re looking for a big dumb rock album to blare from your car stereo as you rocket beachwards this summer, The Big Black would be a fine choice indeed.