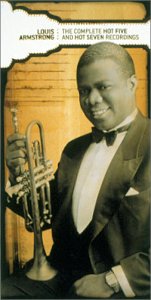 Louis Armstrong, in His Own Words:

Jazz is inextricably bound to its history. Each new generation of players is scrutinized through the lens of those who came before, to a degree inconceivable in rock, even though the melodic and structural scope of rock is much narrower than that of jazz. Of course, weighing the new against the old (or, to another way of thinking, crushing youth under the weight of history) would not be possible without the establishment of canons and heirarchies, and at this jazz has long excelled. But a paradox has emerged in the past fifteen years, since the introduction of CDs. Because of the grave importance granted the history of the music, jazz albums are reissued on CD constantly. This curatorial attitude, though, creates an atmosphere where history and chronology cease to matter. The entire history of jazz, more or less, exists simultaneously in record-store racks, or on the Internet. One can, if one so chooses, pick any record out of the endless vistas of music and listen to it free of chronological baggage. It is possible to absorb John Coltrane‘s most free-form, screaming Impulse!-era material before going near his early, bluesy Prestige sessions, or to listen to Miles Davis’s 1959 Kind Of Blue directly alongside his electrified, chaotic Agharta, from 1975. Similarly, Louis Armstrong, for all intents and purposes the father of jazz, now exists only as more CDs in the racks next to 75 years’ worth of subsequent material by other artists, any one of whom may owe him everything or nothing, stylistically.

This is terrifying in some ways, but in other ways it’s exhilarating. The music is unwittingly, and by its own custodians, forced to exist as music alone, rather than homework or a catechism (which is, of course, as it should be). The exhilaration comes, though, in realizing that 75 years later, this is still brilliant, beautiful music. It would be easy to dismiss the Hot Five and Hot Seven as "old-time stuff," particularly in light of the instrumentation (trumpet, clarinet, piano, banjo and trombone, with the later addition of tuba and drums). But when the notes begin to pour out of the speakers, the unbidden urges – first, to grin widely; next, to tap one’s foot or even to stand up, making sure there’s nobody else home, and dance foolishly about the room – come in a rush, and stay for as long as the music continues. The closest comparison would not be contemporaneous music, but rather the 1959-60 records of the Ornette Coleman Quartet – The Shape Of Jazz To Come, Change Of The Century and This Is Our Music. The same shimmering joy and rich melody pours from those records as it does these eighty-nine songs, spread in rough chronological order over four CDs.

The commonly-cited tracks from these groups ("Cornet Chop Suey," "Heebie Jeebies," "Potato Head Blues," "Lonesome Blues," "Muggles") are all glorious, but it’s the less well-known tracks that are the real treasures, not only for their musical performance, which is uniformly excellent, but also for more…earthy reasons. "That’s When I’ll Come Back To You," a duet between Armstrong and wife Lil (Disc Three, Track Eleven), features blackly hilarious lyrics like "Now daddy I’ll treat you right, promise never to fight/If you’ll only come back to me…I’ll work hard every day and give you all of my pay/If you’ll only try to agree…You can knock me down, treat me rough and even kick me/Black both my eyes but daddy, please don’t quit me"(!). Even Merle Haggard and Loretta Lynn’s "You’re The Reason Our Kids Are Ugly" never hit these levels. For connoisseurs of crude pleasures, "That’s When I’ll Come Back To You," "Muggles," and "Shit Outta Luck Blues" are definite keepers.

It being Armstrong’s centennial, the label has pulled out all the stops – the four CDs are enclosed in a hardback book, beautifully printed on glossy paper, with dozens of archival photographs, and a handsome slipcase. On some level, it’s a shame this release is so gorgeously, and ornately, packaged. Jazz boxed sets, both in reality and in the perceptions of the public, are aimed at a highly specific niche audience. One could almost wish this material were made available in no-frills packaging, and budget-priced. Then it might reach all, or at least more, of the people into whose life these performances would surely bring wide, foolish grins of pure pleasure.