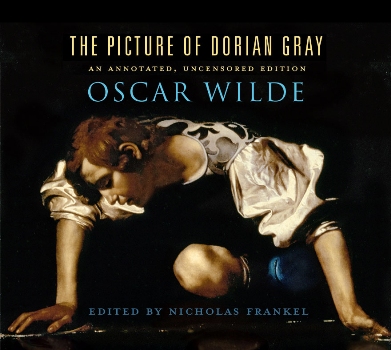 “The Picture of Dorian Gray: An Annotated, Uncensored Edition”

If ever there were a reason to revisit a literary classic, it is the publication of the uncensored, annotated version Oscar Wilde’s “The Picture of Dorian Gray” in a lushly illustrated edition by Harvard University Press. Editor and Wilde scholar Nicholas Frankel has meticulously restored text that was changed or cut out of the original drafts due mostly to veiled homoeroticism. Frankel vividly details the repressed social mores of 1890s Victorian England that made the book a scandalous romanà clef.

Wilde was the most celebrated man of letters at the time and the toast of the West End, where his social satires were fashionable. But Wilde’s popularity with the upper crust was starting to wear thin as his personal life was becoming messier and more public with his involvement with Lord Alfred Douglas. The first drafts of “Dorian Gray,” serialized in Lippincott’s Monthly Magazine, were already instigating gossip for what was considered aesthetic decadence, not to mention its psychosexual content.

Lippincott engaged Wilde in an editorial push-pull over the subsequent drafts of “Dorian Gray” the publishers were preparing to release as a full book. As Frankel chronicles, Wilde was very aware of possible lawsuits against him on obscenity charges, and both he and his publishers excised key sexual content and suggestive language, before the complete manuscript went into final drafts.

In this edition, Frankel restores all of the expurgated passages, with side notes explaining the editorial circumstances, and it is one of the most important examinations of the book to date. Its cross-research is definitive and builds a fascinating interactive text that examines the full range of Wilde’s oeuvre. It references everything from his prescience in the field of sexual psychology to Colin Firth’s interpretation of Lord Henry in 2009’s screen adaptation. Notes from Wilde’s private papers, comments from luminaries of the day, not to mention details of Piccadilly rent boys blackmailing Oscar.

Finally, it is a chance to rediscover a classic as the author originally intended it. By now, the expurgated material seems tame, but read along side the drama going on in Wilde’s life, “Dorian Gray” is as dramatic as ever. Take this entry, stricken from the original novel, at the point when Dorian leaves the theater after he breaks with Sybil Vane over her bad acting in front of his friends—“A man with curious eyes had suddenly peered into his face, and then dogged him with stealthy footsteps, passing and repassing him many times.” noted at the side of the text, the reasons for the edit. Along with Richard Ellmann’s definitive biography of Wilde (cited repeatedly in this volume), Frankel’s complete history of “Dorian Gray”’s publication adds to understanding Oscar’s unique place in the pantheon of gay literature.