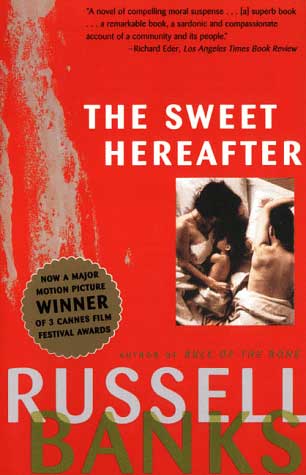 Editors note: The Winter, 1997 issue of Scenario magazine contains the complete screenplay of The Sweet Hereafter, a lengthy interview with Atom Egoyan about writing and directing the film, and an article by Russell Banks about the film. Highly recommended for insight into this contemporary literary masterpiece, the extraordinary film it inspired, and the relationship between the two.

Russell Banks, over the course of three decades, has quietly emerged as one of the finest American novelists. He was 27 years old when his first novel was published in 1967. The Sweet Hereafter (1991) is his eleventh book, and like most of his work, especially the much-admired Continental Drift (1985) and Affliction (1989), it is set in northern New Hampshire, a densely forested region of mountains, harsh winters, and impoverished rural communities. Banks’s evocation of this New England outback and its isolated inhabitants has a mythic grandeur that invites comparison with classic regionalists such as William Faulkner and Willa Cather.

In The Sweet Hereafter Banks dramatizes the aftermath of a tragic accident in the fictional New Hampshire town of Sam Dent (named for a long dead and forgotten local land developer). On a treacherous stretch of highway, the driver lost control of the school bus, which plunged down a snowy embankment and crashed through the ice covering a deep water-filled sandpit. The story never neglects the sense of hardscrabble economic blight and despair that defines this community and its relationship to the impersonal forces of nature that claimed the lives of 14 children. "It’s a landscape that controls you," says Mitchell Stephens, the slick New York lawyer who arrives in town with hopes of convincing the victims’ parents to mount a class-action lawsuit. "It’s dark up there," he says, "closed in by mountains of shadow…"

The voice of Mitchell Stephens – one of the most compelling characters in recent fiction – is one of four that share the narration of The Sweet Hereafter in alternating chapters. Banks is equally deft with his other narrators: Dolores Driscoll, the feisty middle-aged bus driver who survives the accident torn with shame and guilt, but her dignity unbowed; Billy Ansel, an alcoholic Vietnam vet and garage mechanic whose twin daughters died in the crash; and Nichole Burnell, a teenager who was on the bus and survives to mark out her days paralyzed in a wheelchair. Each of these characters is fleshed-out and rendered with complex psychological shadings, their individual versions of events overlapping and intersecting one another so that the novel never feels disjointed or too schematic.

Mitchell Stephens is the novel’s stroke of genius: while he is the ultimate top-dollar ambulance chaser, seemingly amoral and cold-hearted, he becomes a deeply compassionate presence. His strained long-distance relationship with his drug-addicted daughter Zoe haunts him and fuels his rage against a soulless modern culture he believes has stolen his daughter from him. Even his litigious zeal, we soon realize, springs from his feeling of helplessness in the face of his daughter’s turmoil.

As he begins interviewing grieving parents and using all of his professional skills to inspire them with righteous vengeance and visions of a huge monetary settlement, the community neither cracks apart nor comes together in anything like a predictable manner. And when Stephens and the wheelchair-bound Nichole Burnell become unexpected adversaries during the taking of her deposition, we glimpse at last the novel’s tough-minded moral compass, which is as pitiless and cold-eyed as New Hampshire in the dead of winter.

The novel ends during another seasonal extreme, the heat of August, with all the book’s major characters in attendance at the town’s annual demolition derby. It’s an extraordinary chapter and Banks manages to make it both transcendent and hard-edged, showing the community spiritually cleansing itself through a ritual of automotive mayhem that seems to reenact and dispel the worst of their emotional pain. Interestingly, it’s a scene that Atom Egoyan chose not to dramatize in

his 1998 film adaptation, which nevertheless remains remarkably true to the spirit of Banks’s novel (Banks is on record as being highly supportive of Egoyan’s interpretation), particularly in the brilliant performance by Ian Holm as Mitchell Stephens.

The Sweet Hereafter is a quick read. The film is a unique experience that is its own reward. Should you have access to the latest technology, the excellent DVD of The Sweet Hereafter offers a fascinating discussion between Russell Banks and Atom Egoyan on the art of adapting books into films.