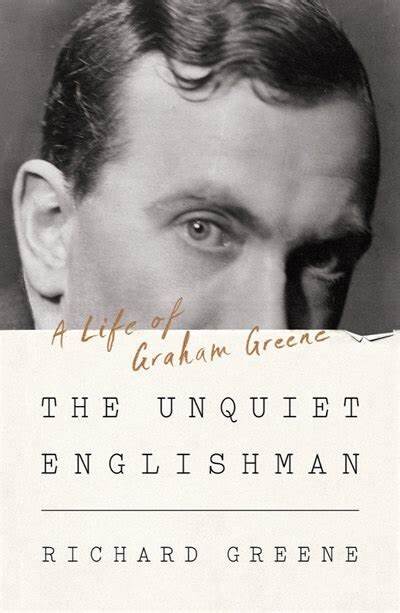 Graham Greene was one of the 20th century’s most successful novelists, from the droll theatrics of ‘Travels with My Aunt’ to his portrait of a soul-searching rebel priest in ‘The Power and Glory.’  Greene wrote characters that captivated readers for six decades.

The shortlist of his bestseller include– Brighton Rock, The Heart of the Matter, The Third Man, The Quiet American, Ministry of Fear, The Confidential Agent, The End of the Affair, Our Man in Havana- but that is only half the story of his prolific and adventurous life. Graham was a war-time journalist for LOOK magazine, a part-time British M15 spy, a playwright and screenwriter (often uncredited). And he was a self-styled diplomat who inserted himself in political hot spots around the world, exploits he copiously chronicled in letters and journals.

A new biography by Canadian writer Richard Greene brings new insight and analysis of Graham’s restless nature, his relationships and his creative life. The author had access to previously Greene’s private papers and dictaphone recordings. Graham even kept a copious log of his dreams because he admitted in his sort of autobiography titled ‘A Sort of Life’ he didn’t trust his memory.

Respected all over the world for his accomplishments on all these fronts, his career rarely gave him pleasure, he was in it for the adventure. He sought out adventure in political hot spots around the world, even often flirting with the idea that he would be happier if ‘the bullet’ would finish him off.

As RG reveals, Graham’s restlessness and insecurities drove him to dangerous parts of the world in Latin America, Africa and Indochina where he got the inside track on corrupt regimes, spy networks, military leaders, and rebel enclaves. He even spent six weeks in a leprosarium in Africa for research for his novel A Burnt-Out Case, about a depressed architect. who exiles himself to the Belgian Congo before it became a Democratic Republic.

As assured as Graham was in his professional achievements, he suffered from manic depression, and from a young age, contemplated suicide. He was a heavy drinker and at various times he was addicted to opium. His marriage to Vivien was tumultuous, even though he was genuinely but he had casual and serious affairs that eventual caused their permanent separation, but they did not divorce.

Greene had a relationship with Catherine Walston and their affair lasted years, only splitting, sort of, when he fell in love with actress Anita Bjork, a star of Swedish theater and international cinema.

Meanwhile, his Greene’s relationship with his son Francis Charles and his daughter Lucy Caroline remained distant. His work keeping him abroad for long stretches, with him sending letters that didn’t make up for missing key events in their lives.  His daughter Caroline eventually moved to Canada and literally build a horse ranch. And even though Greene put up the money, when he finally visited her, she told him how hard his absences and reputation as a womanizer, drinker and political instigator had negatively impacted his family.

Greene was equally critical of political ideologies as mechanism of power and corruption whether it was in communist, socialist, democratic republics or dictatorships. Greene chronicles Graham’s lifelong commitment of putting himself in ‘harm’s way’ to bring attention to human rights abuses around the world. In Haiti to research The Comedians, his scabrous depiction a corrupt Duvalier presidency. After the book’s became an international bestseller ‘Papa Doc’ admitted that he wanted to assassinate Greene, but was ultimately afraid of suffering international reprisals that might hurt Haiti’s tourism.

The last two decades of his life, Greene didn’t slow up, but his heavy drinking, drug use, strained relationships and ceaseless globetrotting caught up with him. He had several serious health problems, but they slowed him down for as long as it took to get back to his hectic life of traveling and writing.

Richard Greene insights into Graham’s compulsive creative process is fascinating and authoritative and gives the background on the real people Graham knew whose character and deeds were the source of his most compelling fictional characters.

The author’s methodical and illuminating machinations of corrupt regimes- the setting of so many of Greene’s best novels- bring new insights into Graham’s exclusive access to top officials around the world.   This biography is a fine line a portrait and Richard Greene’s comprehensive research and understand of Greene’s body of work, is an authoritative, wryly observed portrait of the man, his work and his daring times.