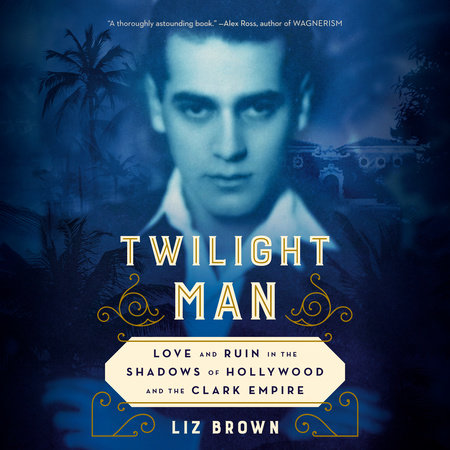 Liz Brown’s “Twilight Man” is the dual biographies of Harrison Post, and a middle-aged philanthropist named Will Clark, Jr. who was a very public figure as the founder of the Los Angeles Philharmonic and built the Hollywood Bowl. He also was a 3rd generation head of a Montana copper empire, so had to keep his private life on the downlow.

Homosexuality was a criminal offence in every state, but Clark and Post were completely insulated from arrest because of Clark’s wealth and political influence.  Liz Brown knew that Clark was her great-great uncle and there was gossip about him in the family, but she knew nothing about Post, and when she discovered a picture of him in her grandmother’s night-table she wanted to find out the full story.

Brown is lesbian and had been living in New York with her partner, and essentially estranged for her parents after she came out to them.  But Brown returned to L.A. years later to attend her grandmother’s funeral. Why was there this keepsake of Post with a dedication to her grandmother? Brown spent years piecing the story of the hidden relationship and all the drama of their hidden history together.

Will also had to concoct a media fortress not to be publicly exposed by his business rivals and Hollywood media gossips.  But the couples’ relationship was an open Hollywood secret, as Clark taking Post with him on vacations in Europe, with lavished him with gifts including building him a mansion of his own, adjacent to his own properties.

Harrison Post was born Albert Weis, the son of a partner of Will Clark, Sr. and when the partner died, Clark adopted his children, Albert and Gladys, and arranged for them to study music in Europe. But they were caught in the middle of ongoing custody claims with their own mother and her relatives.

When Albert got older, he moved to L.A. and changed his name, and worked in an exclusive haberdashery, where they met. Clark was so smitten that he set him up in a secreted mansion and lavish him with money and gifts.

Post reinvented himself in Hollywood, and many people thought he was an actor with his sultry Valentino  looks.  But he was for many years genuinely devoted to the middle-age Clark. He did pursue his other interests, he was an avid reader, collector of rare books, was a freelance interior designer and even taught himself bookbinding. They were seen everywhere in social and political circles and had their own box at the Philharmonic.

Harrison’s but gets overshadowed by a gallery of people in Will Clark’s orbit In Brown’s deep dive into the culture of money, media and influence. Clark lorded over a sometimes very visible gay social network that included huge parties that attracted public attention. Clark had to beat back blackmail plots, police inquiries and extortionists. The couple had to spend time apart to tamp down rumors, and Clark was also be pressured by his own family, to the extent that he returned to Montana and married, but still spent extended periods in L.A. to be near Harrison.

When Clark died suddenly of a heart attack, he left the bulk of his estate, the mansion, the artwork, jewelry in trust for Harrison Post.  After Clark’s death, he had what he termed in his journal later as a ‘mental snap.’   His scheming sister Gladys was newly married to a crook named Crooks, and the couple had Harrison declared ‘Incompetent’ and had him committed to a sanatorium, where he while languished for two years. The couple, meanwhile, started liquidating his estate, eventually moving to Mexico trying to start their own business.

Everything careened out of control for Post, and he eventually lost everything, but his is also a story of surviving with courage and dignity in the face of even life-threatening defeat. He even narrowly escaped.

He eventually came out of it, with the help of his valet/masseur who was working there, but who also was returning to Norway where he had controlling interest in a spa. Harrison wanted to stay in Norway and rebuild his life, but the Nazis invaded   Harrison was arrested, but kept in Norway, along with other Jewish Americans, imprisoned, brutalized, but not exterminated.

Eventually he was headed for the camps, but the war ended, and Harrison escaped yet again back to the US, to reclaim his life, if not his fortune. Brown’s exhaustive research of some of the fringe characters in the Clark orbit can be a bit heavy going in key spots, but mostly there is much to admire this saga of money, power and gay romance in jazz age Hollywood.

Graham Greene was one of the 20th century’s most successful novelists, from the droll theatrics of ‘Travels with My Aunt’...
Books & CDs