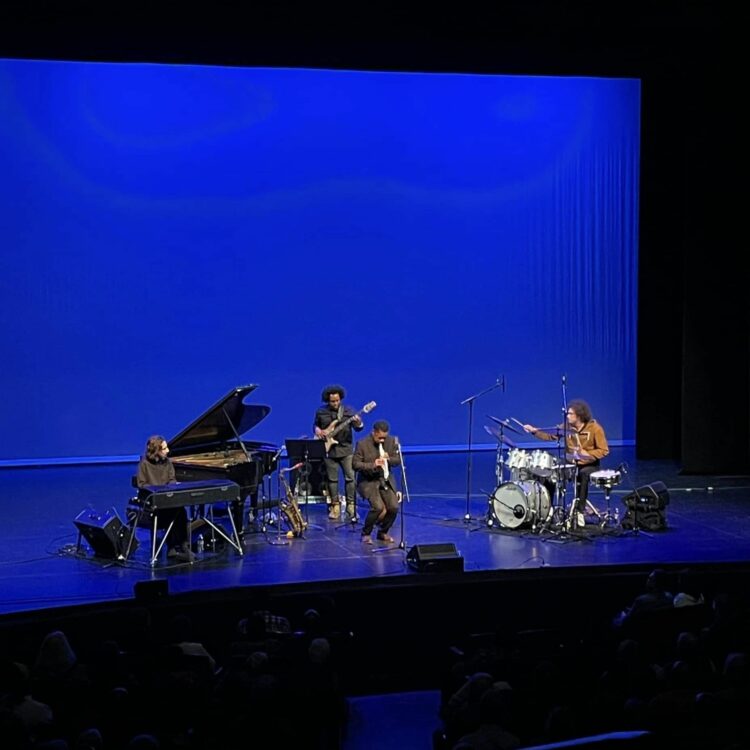 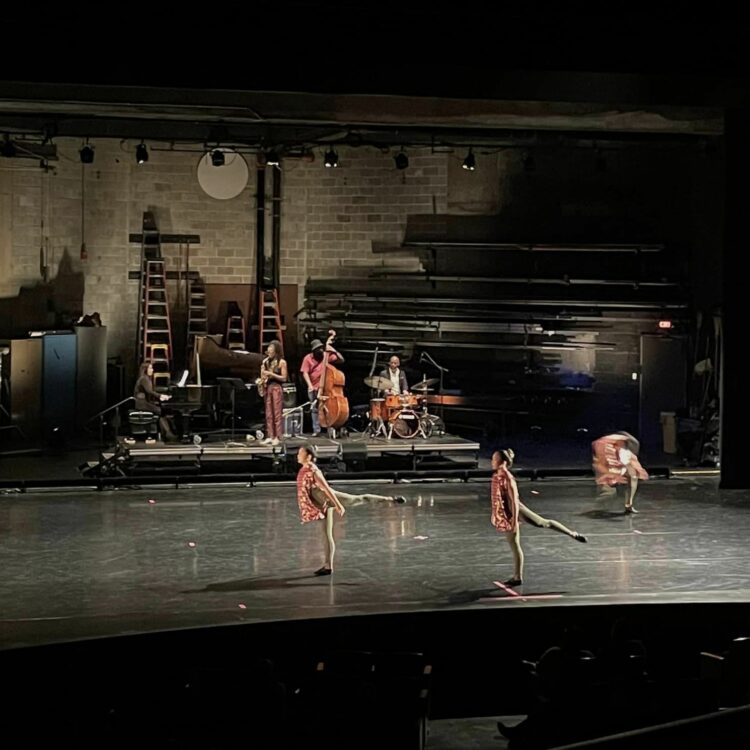 Penn Live Arts’ celebrated the musical legacies of John and Alice Coltrane, with a series of concerts and engagements with the musicians, including the couple’s son Ravi Coltrane. The often-overlooked compositions of his mother, a composer and virtuoso harpist in her own right, was featured in concert performances by Saxophonist Lakecia Benjamin & her group Pursuance, Harpist Brandee Younger and choreographer Pam Tanowitz. Guest artists included Dee Dee Bridgewater, Gary Bartz and Reggie Workman and the festival was capped off with a stellar by Ravi Coltrane’s Quartet with a set list of his parent’s ‘Cosmic Music.’

The Coltrane festival kicked off with New York based Pam Tanowitz Dance in collaboration with saxophonist Lakecia Benjamin and her group Pursuance.

The concert opened with a screening of “Every Moment Alters” a beautifully shot 20- minute dance film by Tanowitz and Liz Sargent produced during the pandemic lockdown. the dancers in studio, in woods next to downed trees, and on Manhattan rooftops. Tanowitz’s juxtaposition of bodies in isolated environments, wandering, introspective and chaotic, and poetical markers of Tanowitz’s dynamic aesthetic of body architecture.

Then dancers Zachary Gonder and Lindsey Jones were on the Annenberg Stage dancing to a recording of Alice Coltrane’s jazz version of ‘My Favorite Things’ costumed in glitter tunics, the partners mirroring each other’s moves, Tanowitz characterizing to the chromatic lines by Coltrane. Their duet exemplar of Tanowitz style as “minimalist, very simple ideas, and problem to be solved.” Once solved, the partners are joined by four other dancers in movement going forward or reverse, or angular repetitions, eventually giving way to bursts of sinuous, lyrical movement.. Tanowitz configurations of disparate scenes unfolding on the stage simultaneously or overlapping is intriguingly, but in moments, too busy.

Next Tanowitz’s ‘Forever and Ever and Ever and Ever’ scored to ‘Once more With Feelings composed by Caroline Shaw, dancers Kara Chan, Christine Flores, Zachary Gonder, Lindsey Jones, Brian Lawson, Maile Okamura, Melissa Toogood in a series of configurations- some compelling passages seem to stall instead of blooming into something more fleshed out on stage. But the ensemble’s precision and personas, however cryptic, carry the piece. Also distracting is the soundtrack with fragments of radio broadcasts, scratchy sentimental songs from bygone eras set to abstract choreography, some passages engaging, other sequences indulgent.

In contrast, the strengths of Tanowitz’s concepts are immediately kinetic in final section of the concert with live music performed by Lakecia Benjamin and Pursuance. Benjamin, the curator for the Coltrane Festival, performed Alice Coltrane compositions ‘Walk with  me’ and ‘Going Home’ in an altogether cohesive choreography.

Benjamin’s lush and fiery on Coltrane’s sonorous lead sax engulfing the theater, backed by percussive piano, bass and drums carve out various choreographic paths, which liberate these dancers onstage. The energy keeps building, and in the final section Melissa Toogood’s finishes the piece with a spellbinding solo that surfed Benjamin’s sax lines and completely mesmerized.

The  Zellerbach Theater was all but full of jazz fans young and older to hear Ravi Coltrane Quartet Oct 22 for what proved to be a near 90-minute set of soulful, virtuosic, and altogether incandescent jazz. This quartet true masters, playing it forward as keeper of the progressive jazz renaissance of the Coltranes’ era.

Without fanfare the musician strolled onstage, Ravi on soprano sax stating the free-form exploration of the themes and variations of Alice Coltrane’s “Los Caballos” from her 1976 album ‘Eternity’ the original track recorded with a 14-piece orchestra, and her son’s variations just as fulsome musically.

Among the many musical highlights:
Drummer Elie Howell barely breaking a sweat and otherwise splitting atoms in a fuselage of  a drum solo. Coltrane’s trifecta of percussion with Elie Howell on drums, Rashaad Carter on bass guitar/ double bass, Gavi Lehavi keyboards/piano.

Ravi Coltrane’s entrancing sax lines surfing over the scales, Howell barely breaking a sweat, in of fuselage of rhythm splitting atoms with spellbinding flights of rhythm. The duo’s handoff to Lehavi on electric keyboard with crystalized breeziness and Carter’s bass turning on a blue note flame.
Coltrane introduced his band adding that “It’s “Always great to be back in Philadelphia….where my father cut his teeth musically and made a name for himself as a sax player like no one else.”
Then cued up ‘Wise Men’ from his father’s 1963 recording ‘Crescent. ‘with Lehavi on grand piano for its meditative opening themes and Ravi coming in with that tenor sax lushness and Howell in cymbal. Coltrane entranced playing father’s classic ‘After the Rain’ from “Live at Birdland” a tenor sax ballade that still conjures an indelible jazz era.

Another unforgettable highlight of this concert was the quartet’s version of “Journey In Satchidananda” Alice Coltrane’s transcendent orchestral, opening with a solo by Rashaad Carter’s bass solo and the piece just as mystic even without harp and sitar that made the original so powerful.

The closing number was ‘Giant Steps’ opened with Howell’s roving drums with Ravi Coltrane on the raucously staccato soprano sax and Lehavi’s trippy keyboards lines. The Ravi Coltrane Quartet & Quintets are keepers of the progressive jazz renaissance flame of the Coltranes’ lit.