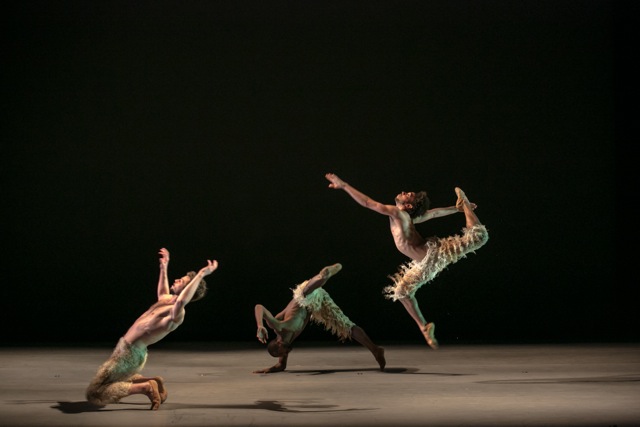 Alonzo King’s world premiere of “Biophony,” which is inspired by archival recordings of animals and sonic imprints of natural habitats, just happened to follow last week’s Meredith Monk performance of “On Behalf of Nature”. With both come an awe-inspiring appreciation and humility along with an underlying grief.   How does one listen to Bernie Krause’s vibrant biological soundscape of the thundering murmurs of humpback whales, the cacophony of a swarm of bees, or the haunting cries of bald eagles, without considering the plight these creatures face? Even if we deny the reality we live in, we still can’t help but  feel helpless or overwhelmed.   Perhaps  these ecological themes are presenting themselves with a greater frequency in the world of dance and theater as artists once again try to give voice to the innocent and to make sense of the reality we humans face.

To Krause’s recordings–that not only encompass four decades of microphones capturing the earth’s sounds and the songs of its creatures but also immortalizes entire ecosystems– Richard Blackford composed a minimal score, giving King a biosphere of his own to choreograph within. The choreography allows his natural earthy and sensual sensibility to restructure ballet moves into the physiology of creatures, which most of his work is never far from but with “Biophony” he has full freedom. Dancers crawl, fly, drag, elongate, flutter, hand balance, somersault, and articulate small gestures that create composites of beasts that are sometime part ostriches and gorilla, part insect and waterfall, beasts of burden and leaping frogs.

The company brilliantly wades through this production at a consistent clip that hardly lets up. They are more strongly balanced as an ensemble then ever with equal talent shinning almost throughout. Jeffery Van Sciver is flamboyantly energetic with limbs that that seldom appear to be connected to his torso, and Babtuni’s muscularity doesn’t limit his fluidity but seems to enhance it. Newcomer Shuaib Elhassan is also an eloquently strong addition to the male dancers and Michael Montgomery is consistently great throughout both acts, with impeccable timing and sharpness of line that at times almost is overshadowed by the shear stature and long limbs of the taller and bigger dancers. Kara Wilkes and Courtney Henry, as usual are splendid, complimenting each other like birds of the same feather.

Still, as captivating as “Biophony” is, it also lacks a counter-tension, stillness, or contrasting emotion to juxtapose its propulsive stream of sound and movement that pummels viewers through its nine segments. Which is interesting in relation to Act One’s, “Concerto for Two Violins” which is also propelled by Bach’s single exuberant trajectory, relentless beat of violin strings, but manages a more subtle range of variation. Again the company is spot-on in this neoclassical ballet that could easily fall to more classical dance as was Balanchine’s with Bach dictating movement, but it joyfully doesn’t. The stage is stripped, the black backless leotards for the women and simple black brief for bare-chested men minimal, with the Philharmonia Baroque Chamber Players playing beautifully from the orchestra pit.

Particularly lovely is the middle section, during the “largo, ma non tanto,” when King has replaced the classic pas deux with a pas de quatre that feels like a carousel painted by Matisse, with Kara Wilkes, Laura O’Malley, Robb Beresford, and Michael Montgomery folding and lifting each other as if being spun on a turntable. The full company  dances the rest of the performance with a high energy and buoyancy.  “Concerto for Two Violins” is uplifting and celebratory, especially when being danced on the heels of King’s esteemed Doris Duke Artist Award, which he deservingly received the week earlier.